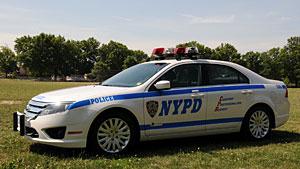 Ford hybrids on patrol with NYPD

The New York City Police Department has deployed the first 30 of 102 Ford Fusion Hybrid alternative fuel vehicles to be used as marked patrol cars. The hybrids will be used to patrol the Big Apple's five boroughs.

The New York City Police Department (NYPD) has deployed the first 30 of 102 Ford Fusion Hybrid alternative fuel vehicles to be used as marked patrol cars. The hybrids will be used to patrol the Big Apple’s five boroughs. 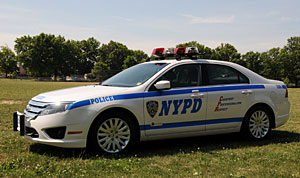 The department’s Fleet Services Division and Driver Training Unit evaluated the hybrids for patrol use. The U.S. Environmental Protection Agency estimates that the Fusion Hybrids get 41 miles per gallon in city driving, which is about double the mileage that the department gets in its standard gasoline Chevrolet Impala patrol car. As with all hybrid technology vehicles, the Fusion Hybrid switches between gasoline engine and electric motor. “Safety and performance are our priorities in selecting automobiles for the police fleet,” Police Commissioner Raymond Kelly said. “It’s a bonus when we can add outstanding fuel economy to the mix.”

The Fusion Hybrids have been outfitted with specialized patrol equipment. “This is an independent project by the city of New York and does not involve Ford,” Robert Parker, Ford’s director of product communications in North America, told Govpro.com. “Ford has specific requirements for our police vehicles, and the Police Interceptors we produce meet these requirements. At this time we do not have plans to develop a Police Interceptor version of the Fusion Hybrid.”

The department also uses hybrid vehicles in its parking enforcement fleet, as well as electric scooters and GMC Yukon Hybrid SUVs. The city also uses a limited number of Ford Escape Hybrid police vehicles for a variety of non-patrol uses. With the addition of the Ford Fusions, the NYPD fleet will have more than 400 alternative fuel vehicles.

Acquisition of the Ford Fusion Hybrids is partially funded through PlaNYC, the city’s effort to reduce energy consumption and greenhouse gas emissions from the municipal buildings and operations by 30 percent by 2017. The projects in the plan, including the purchase of hybrid patrol vehicles, will be partially funded through an annual commitment of 10 percent of the city’s energy budget. “Using hybrid patrol cars will help fulfill our ambitious PlaNYC goal of reducing city government’s carbon footprint,” Mayor Michael Bloomberg said. “These vehicles use less fuel and emit fewer pollutants into the air we breathe.”