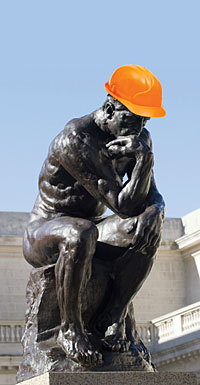 While sustainability is often considered an environmental term, many public works leaders define it as a priority that encompasses all aspects of investing in the long-term good of the community. That means making decisions that are simultaneously beneficial for the environment, residents, development, community character, overall quality of life and more. Executing a holistic approach requires involving everyone from the public works director to residents and from across divisions, cities and counties. Those concepts are not revolutionary, but they are driving how public works departments are being reshaped.

“We’re starting to look out 50 to 100 years, realizing that issues such as climate change and resource scarcity are going to require a different approach to how we’re doing business,” says Michael Mucha, public works director for Olympia, Wash. “Our approach has been taking pride in being builders and building our communities and developing areas for vitality. But water and other resources are becoming more scarce, and we can’t build our way out of these problems.”

The need to rethink how public works departments function is being fueled by more than resource scarcity. Residents are taking more interest in what happens in their communities. “Twenty or 30 years ago, we were engineers and scientists and knew what was best,” says Dick McKinley, public works director for Tacoma, Wash. “For a while now, residents have been saying, ‘These are our neighborhoods.’ So, we have changed our focus.”

At the same time, it remains clear that funding will never be adequate to meet public works departments’ needs. Compensating for the shortfall makes it even more imperative that cities depend more on residents’ action, encourage cooperation across divisions and departments, and consider the significance of each project on the community.

“When you add up the money spent in public works, even though it’s not everything we need, it’s still a lot of money,” says Daryl Grigsby, public works director for Pomona, Calif. “Our challenge is with the limited dollars to figure out the projects and services with the largest impact to the public and focus on those. That’s not a new concept, but it has to be taken to a higher level.”

Transportation issues exemplify the type of challenge that public works departments face and the need for a commitment to sustainable solutions and a new approach. For instance, expanding roads to deal with the widespread problem of traffic congestion fails to address environmental issues, does not encourage residents to change their behaviors and ultimately does not provide a long-term solution. “We want to reduce emissions by 20 percent over 1990 levels, but if our transportation investment policies focus on funding expansion, those two things are inconsistent,” Grigsby says.

Pomona recently formed a transportation subcommittee that will be looking at each city transportation investment by mode. The examination will include street upgrades and expansions, and traffic improvements to ensure that the priorities are consistent with other goals for the city. “Instead of looking at how much money we need, we are looking at making sure the investments we make meet what Pomona residents need,” Grigsby adds.

Olympia took a long-term approach when rebuilding a bridge that traverses the Puget Sound. The traffic projections for a 50-year bridge called for four lanes. The city, however, decided on a three-lane bridge with a wider bicycle and pedestrian facility. “We built for what we wanted instead of propagating the future,” Mucha says. Rather than relying on forecasting, the city used “backcasting” — envisioning a goal for the future and then determining what needed to be done to guarantee that goal is reached, which was fewer vehicles on the road, in this instance. “People now walk and bike to work more,” Mucha adds.

Building effective infrastructure does not guarantee a project’s or program’s success without support from residents. One simple example is recycling. A city can plan routes, distribute bins and send trucks every week to pick up recyclables, but if residents are not motivated to recycle, the program is worthless. “We remove barriers so it’s easier to recycle more and throw away less waste or be less dependent on cars,” Mucha says. “We have to make other options more attractive. It’s looking at behavior change and getting into the qualitative skills of our work rather than just science and design.”

Christine Andersen, public works director for Santa Barbara, Calif., points to Boulder, Colo., as a city that has created a model for alternative transportation and made it popular among residents. Its Community Transit Network includes buses through the city and county that also connect to Regional Transportation District buses. Aside from the infrastructure, Andersen says employers in the area strongly support the system, and many provide employees with free bus passes. “It’s socially acceptable to use the bus and is expected,” she says. “That has moved the viability of the bus system in Boulder.”

Putting the public in public works

Getting residents involved in public works efforts also requires instilling a sense of ownership, which can be accomplished in a variety of ways. In May, for instance, Pomona hosts a Public Works Week celebration with the purpose of emphasizing that the public works infrastructure belongs to the public.

One of the most direct ways is involving residents in the planning process. “The new paradigm is to ask what we want to accomplish downtown, for instance,” Mucha says. He explains that the city may want to improve traffic flow and safety, but residents may want a downtown with a residential feel that accommodates walking. When the department undertakes a project, it is an opportunity to address residents’ concerns as long as the city is spending money to make changes. “We get a clear idea of what we want to achieve together, then we apply our technical knowledge.”

Just as important as involving residents is collaborating across divisions, departments and jurisdictional boundaries. “We’ve become more technical, and there are really a diverse mix of types of skills and expertise, but we’re all working within the same general right of way,” Andersen says. “Just the fact that we are sharing physical space requires a strong coordination and understanding of each other’s roles.”

She says that without proper communication, a highway construction project could produce enough waste to cancel out any gains made in residential recycling. Or, Andersen brings up the seemingly benign example of street tree placement to create character and benefit the environment. Yet, the city also has to consider root intrusion into the water and wastewater systems or the curb lines maintained by the streets division that could be pushed out by the trees.

Create a plan, and work it

Adapting to changing needs calls for a certain amount of risk-taking. The challenge in public works is finding a way to take risks and learn from them without wasting funds. “You are often building a project that should last 50 years,” Grigsby says. “You can’t take a lot of risks with that.”

While he served as public works director for Kirkland, Wash., Grigsby worked on a campaign to promote pedestrian safety. As part of the effort, Kirkland installed pedestrian in-pavement lighting systems for crosswalks and pedestrian flags at intersections. Critics complained that the methods were costly to maintain and gave pedestrians a false sense of security. The city council and staff, however, decided to proceed and send a message that pedestrian safety was important in the city. Kirkland now has about 70 intersections with flags and 30 crosswalks with in-pavement lighting.

Olympia, meanwhile, has been experimenting with porous concrete pavement for 10 years, trying a variety of designs. “Some have failed,” Mucha says. “But we do it on a small scale, and now we can do complete roads on porous.” In one instance, the city put a sidewalk over a storm line incorporating porous pavement and lost the entire sidewalk. “We learned from it, and that’s crucial for us to move forward,” he adds.

McKinley believes that moving ahead also means taking into consideration that many of a public works departments’ customers are not born yet. He views himself as a steward helping keep the city vital for future generations. Part of his philosophy is scrutinizing every decision and doing things for the right reasons.

He uses recycling as an example, pointing out that the markets for recyclables can fluctuate wildly. “At some point, we have to be committed to taking care of that resource regardless of the market,” he says. “You can’t just recycle when the market’s good or tell the public to stop collecting glass for a while.” Despite the market for glass being “toast” in Tacoma, the city has started crushing it and using it in trench backfills and paving projects to save gravel work until the market picks back up again. “We don’t stop doing the right thing because of the markets,” he says.

Thinking more about the future, taking actions for “the right reasons,” scrutinizing investments and involving every individual that will be affected are all part of the shift toward a public works model that will meet current and future demands. “Sustainability is all about a balanced solution that’s good for people and the environment and economic well-being, or it’s not sustainable,” Mucha says. “Every policy, every system, every decision has to deliver a balanced solution.”