County Leader of the Year: King of the road 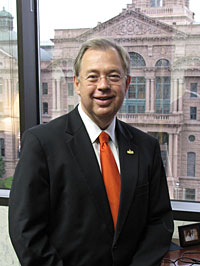 Almost everyone in Tarrant County, Texas, associates County Judge B. Glen Whitley with his success in bringing together the diverse forces in North Texas to make possible the $2.4 billion North Tarrant Express, a public/private partnership that is expected to transform transportation in the North Texas area. But, Whitley says that the community response to the Hurricane Katrina disaster is a better indicator of his philosophy of governing.

At the time a Tarrant County commissioner, Whitley saw how his Fort Worth-area community pulled together resources to help the flood of refugees that came from New Orleans after the devastating storm hit in August 2005. “We took in a lot of folks and sheltered them,” he recalls. “People around here were most upset that we couldn’t use all of the help that they were offering. Folks want to help. It was our responsibility to find something for them to do.”

Marshaling forces to meet the broad needs of the community is a central tenet of Whitley’s philosophy. Since he was elected to his first four-year term as County Judge in Tarrant County in 2006, his extraordinary ability to unite the often colliding political forces in a burgeoning North Texas region has brought him accolades for achievements that had eluded his predecessors for decades, especially the transformational North Tarrant Express project. For his visionary leadership and his ability to unite otherwise warring parties to better the Fort Worth region, American City and County has named Whitley its County Leader of the Year in 2010.

A leader for all seasons

“Glen has been a leader on so many issues,” says Gary Fickes, a Tarrant County commissioner, who inherited Whitley’s seat when he became county judge. “He comes up with the right solution at the right time on the right issues. I’m amazed at the things he has been able to accomplish.”

For many leaders in the area, Whitley’s role in finding a financial solution that has given life to the North Tarrant Express is a signal achievement that alone merits his accolade. Others cite his achievements in a variety of initiatives, ranging from an overhaul of the mental health system to resolving small inter-departmental issues that hinder government productivity.

Above all, they say, Whitley’s ability to bring together diverse groups to resolve issues is the hallmark of his leadership style, sorting out the issues, listening to all points of view, yet insisting, in the end, that a solution must be identified and rallied around. “He’s very persistent in his listening methods,” says North Richland Hills Mayor Oscar Trevino. “He lets people discuss their positions. He doesn’t make up his mind until all questions are answered. Then, he works with everybody to find commonalities. He’s a very good consensus builder.”

No project owes more of its progress to Whitley than the North Tarrant Express, parts of which had been on the books for 30 years before leaders finally assembled funding to allow the massive highway expansion and reconstruction initiative to break ground. While a broad consensus had concluded that the choked transportation system had to be revamped, no one could work out a politically acceptable means to pay for it.

Whitley knew that leaders for a generation had pushed the idea of the North Tarrant Express as a vital piece of infrastructure to feed the economic engine in the North Texas area. The Metroplex, which also includes Dallas and Arlington, is the nation’s fourth-largest region with 6.5 million people and is expected to grow by another 1 million people every decade until 2040. Motorists and businesses alike complain about clogged roads, a situation that threatens economic development.

Whitley’s North Tarrant Express plan involved obtaining private sector funds to supplement public participation to cover the $2.4 billion cost. Moreover, the proposal meets the complaints of conservative Texas voters who resisted the idea of paying tolls on top of taxes by combining expanded free lanes with new managed lanes. Motorists who want to pay for faster travel can jump on managed toll lanes, while cost-conscious motorists can drive on the free lanes. A Spanish company won the bid for the project, agreeing to cover two-thirds of the construction cost while receiving the revenue from the managed lanes in return.

The once-stalled project, which breaks ground in late 2010 and is scheduled for completion by 2015, will expand the existing four lanes to six main lanes, add four toll-managed lanes, plus frontage roads and auxiliary lanes to approximately double the existing capacity. The public-private partnership uses two-thirds private funds with one-third public funds to complete the 13-mile corridor in five years. “Glen was able to cobble together many different projects into one project,” says Russell Laughlin, senior vice president of Hillwood Properties and Texas Alliance, a major developer in the North Texas area. “He gathered environmental and political support and used his contacts in the world of transportation. He’s an unyielding advocate for roadway project funding.”

Whitley is creative in meeting the needs for expanding the nation’s infrastructure at a time of increasingly limited public financial resources, says Maribel Chavez, district engineer for the Texas Department of Transportation. “At the end of the day, there are limited public dollars,” she says. “He knows how to maximize these public dollars, be aggressive, use innovative strategies, lead the effort to utilize whatever tools that are available to us.”

Chavez explains that the managed lanes idea takes the now-common idea of high-occupancy vehicle (HOV) lanes a step farther. Instead of an often-vacant lane only for vehicles with multiple passengers, managed lanes are open to any motorist willing to pay for a guaranteed, reliable trip — at 50 miles per hour. Whitley says that solutions that include benefits for all parties are essential to his political philosophy of using available resources, finding where government works best but not ruling out private contributions, and organizing people for the optimum results. “It’s all about collaboration,” he says. “Sit down and work to accomplish what needs to be accomplished.”

Facing problems with a business approach 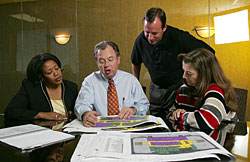 Whitley came to politics after building a highly successful accounting practice in the Fort Worth and Dallas area. He was elected Tarrant County commissioner in 1996, representing the northeast portion of the county, and then Tarrant County judge in 2006, which in Texas serves as the county executive and presides over the Tarrant County Commissioners Court. He is unopposed for re-election in November for a second, four-year term.

Whitley agrees with others who cite his business experience as an asset for drawing together the diverse forces for successful public projects. “The financial background helps,” he says. “It gives some folks comfort. I understand the importance of keeping business going, and we’re not just looking to raise additional revenue.”

He also acknowledges those who point to his political skills. “It’s a matter of making sure that everybody understands the problem and that it needs a solution,” he says. “Everybody has to be included in the process. If everyone feels they’ve been included, it dilutes some of the opposition that they might have.”

To Whitley, the key reality is the nation’s transportation system is failing, falling behind in maintaining what already exists, much less expanding to meet growing needs. “Our crumbling infrastructure is a problem,” he says, noting that the dependence on per-gallon gasoline excise taxes no longer works when government is simultaneously pushing for fuel efficiency. “The whole funding system is antiquated.”

He believes part of the solution can be found in local option transportation bond issues, which he strongly, but unsuccessfully, lobbied for in the state legislature. He promises he will be back in the next legislature to gain passage of the funding mechanism, which he believes is targeted enough to avoid the “big government” label. “We have to go back and convince folks that transportation is a problem, and the legislature needs to fix it,” he says.

Whitley points to another major transportation issue that is high on his agenda. The so-called Tower 55 is the ground-level intersection of two major railroad lines — the Burlington Northern and the Union Pacific — that is a bottleneck tying up freight traffic, automobiles and commuter lines. “Until this issue is solved, we can’t begin to move forward on commuter rail,” he says, referring to another project on his docket that is critical to his push for better air quality.

The emphasis on public works projects may seem strange coming from a self-described fiscal conservative in a very conservative area. Yet, he does not see his passion for improvements as a commitment to “big government.” “Every day, I worry about improving the effectiveness and efficiency with the taxpayer dollar,” he says. “Government is not the solution to every problem.”

Instead, he sees government as the agent for marshaling the energy of residents. “It’s not just government,” he says. “It’s faith-based organizations. It’s nonprofits through volunteers. There’s a volunteer spirit throughout the country. The big challenge is finding a way to channel it.” He is particularly proud of efforts to improve mental health and assist the disabled by working with churches.

In terms of his management style, he models himself after Ronald Reagan. “He went out and got the best people around,” he says. “I’m never afraid of change, always willing to listen to new ideas. You just have to find the right way to do it.”

He admits, though, that his biggest asset, his accounting background, is also his biggest fault. “I know I spend too much time in the details,” he says. “My staff tells me to go away: ‘Let us work, and we’ll bring it back to you,'” he says.

One of his colleagues pointed to Whitley’s tenure as chair of the metropolitan transportation consortium, when he not only pushed for his own projects but was just as devoted to a critical project on the opposite end of the Metroplex. Whitley acknowledges that he took the broader view rather than just advocating for his own parochial projects. “I was trying to stress that we all needed to leave our local hat at the door,” he says. “We needed to adopt the mindset of what’s best for the Metroplex. It’s all about collaboration.”

Whitley plans to take his philosophy of collaboration to the national scene, when this month he becomes the president of the National Association of Counties. He wants to highlight the critical role played by counties in peoples’ lives — from public health, public safety to the courts. “That’s going to be my initiative for the year,” he says. “Raise the public’s awareness of the county government role.”

Fickes, the county commissioner who has known Whitley for 20 years, says that Whitley once told him that he left one of the largest independent CPA practices in the state because he wanted to make a difference in the lives of the community. “Glen has been a leader on so many issues,” Fickes says. “Whenever I have to introduce him, I always say he’s the best county judge in Texas.”