With revenues continuing to decline and costs still rising, some cities are looking at Chapter 9 — the municipal form of bankruptcy — as a way to reorganize finances and emerge more financially stable. 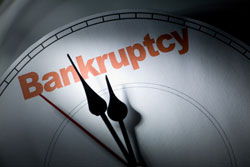 With revenues continuing to decline and costs still rising, some cities are looking at Chapter 9 — the municipal form of bankruptcy — as a way to reorganize finances and emerge more financially stable.

Medium-sized cities — with a population of about 75,000 to 500,000 — are more likely than in the past to file for Chapter 9, says David Dubrow, a partner in the New York office of the Arent Fox law firm and author of “The Treatment of Municipal Debt Under Chapter 9 of the Bankruptcy Code.” “The [federal and state] support cities have been able to get in the past is much more limited now,” Dubrow says. Also, the support states do provide is more likely to go to larger cities, he says.

Bankruptcy can provide cities with time to financially restructure, including renegotiate with creditors, Dubrow adds. In May 2008, Vallejo, Calif., with 121,000 residents, became the largest city in the state to file for Chapter 9. The city reported a 20 percent decline in general revenue funds between 2008 and 2010, and a 24 percent loss during fiscal year 2008 by the city’s pension administrator. The City Council approved a bankruptcy workout plan in December, and the city is still negotiating with the parties involved.

Harrisburg, Pa., has recently considered bankruptcy, largely because of nearly $300 million in debt owed on an incinerator. Despite opposition to the idea from Mayor Linda Thompson, Harrisburg City Controller Dan Miller sees filing Chapter 9 as “inevitable.” “The stigma of bankruptcy can’t make things any worse than they already are,” Miller says.

Vallejo’s bankruptcy could inspire others. “If they are able to [emerge from Chapter 9 on a more stable basis,] others might consider it, as well,” Dubrow says.

Even discussing bankruptcy can make it more difficult for municipalities to attain financing at favorable interest rates. In January, New York-based Fitch Ratings released a two-page comment, “The Perils of Considering Municipal Bankruptcy,” warning that “If bankruptcy is being actively considered, Fitch will assess whether the entity’s current rating should be maintained.”