It takes a village

Local governments should engage everyone in the community — from the private sector to volunteers — to address major disasters. 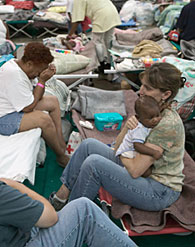 Designed to accommodate normal levels of security and relief efforts, public service agencies can become overwhelmed when facing natural disasters and terrorist attacks. Because it is impractical for state and local governments to have sufficient personnel and equipment to respond and recover from major disasters, innovative and entrepreneurial methods must be devised to supplement them when necessary.

Other businesses, such as electric power facilities are built to handle extreme weather, but even utilities, when faced by unusual events, supplement their work forces by hiring private contractors and having mutual aid agreements with utilities unaffected by the calamity. In taking part in the research for “Safeguarding Homeland Security: Governors & Mayors Speak Out,” which was published last year, mayors and county executives discussed how they engaged the private sector — including for-profit businesses, not-for-profit entities and volunteer groups — when planning their response to disasters.

In many cases, public-private partnerships (PPPs) played significant roles in helping communities recover from disaster. For example, when Hurricanes Katrina and Rita struck in 2005, New Orleans and other communities created an informal PPP to help handle the devastation. Because New Orleans needed more police officers to prevent looting and assist residents and tourists, Louisiana officials deputized Blackwater private security agents to patrol the streets and even use deadly force if necessary. Blackwater also volunteered the services of a helicopter crew to join the Coast Guard in its rescue efforts. Food manufacturers, wholesalers and supermarkets also donated and delivered food, baby formula, disinfectants and medicines to the New Orleans Superdome where many evacuees were housed.

Private businesses and volunteer groups also banded together to help Houston’s Mayor Bill White provide services to more than 200,000 evacuees from Hurricanes Katrina and Rita. The city enlisted major hospitals and pharmacies to establish large field hospitals to process the new arrivals who often were exhausted, dehydrated and hungry. The mayor held daily meetings with Houston’s civic and business leaders to ensure that the needs of the evacuees were met. Those meetings led to the creation of a volunteer organization — composed of Houston business, spiritual and non-profit leaders — to arrange for laundry, clothing, reuniting families, finding housing, and arranging for schooling. One small church provided housing for more than 100 families, and one corporation paid for families to live at a motel. An organization of major churches arranged and managed 10 warehouses with supplies such as food, household materials, furnishings and clothing for the evacuees. The churches involved their lay leadership in arranging and managing the operation and delivery of the supplies.

Sugarland, Texas, Mayor David Wallace organized a regional logistic center, which included equipment and supplies local governments needed to respond and recover from disasters. In addition to eliminating the need for each community to maintain its own large inventory of all supplies, centralized purchasing often earns lower prices from suppliers. The coalition of regional cities and counties says it intends to contract a private company with proven logistical skills to manage the center.

Planning for the Worst

Other communities are preparing to handle disasters before they occur. Jacksonville, a city often threatened by hurricanes, trained volunteers in 2005 to fulfill first-response needs when professional personnel are unavailable and to be part of the recovery efforts. The city established the Volunteer Reception Center in 2004, which coordinates the activities of unaffiliated volunteers in a disaster and is part of the existing Emergency Operation Center. Jacksonville also contracts with trucking and other debris collection firms to join city teams when government resources are insufficient.

In Boston, Mayor Thomas Menino initiated a Medical Reserve Core in 2003 that supplements the city’s public Health Commission during disasters to inoculate residents or provide other mass medical prophylaxis services. When needed, temporary medical centers staffed by trained medical and non-medical volunteers could be scattered throughout the city. During a 2006 measles scare, the reserve core was activated to vaccinate thousands of residents. The city is well on its way to reaching its goal of 4,000 trained volunteers.

Another way communities can handle peak time demand is to have mutual aid agreements. An experiment between Baltimore and Trenton, N. J. is the first case where two cities prepared plans to aid each other in case of a disaster. The agreement stipulates that the city sending aid, including police and firefighters, will bear the initial cost subject to later reimbursement from FEMA or other sources. The resources sent will be under the administrative control of the receiving city. Since such an agreement was not yet activated, state sovereignty issues remain to be tested.

A most important aid to mayors and the other emergency commanders is the availability of a mobile command center that includes immediate access to data and advanced telecommunication devices. In Chicago, Mayor Richard Daley created a mobile command center using a $2 million United Communications Vehicle with two satellite dishes, 100 phone lines, mobile radio capability, Wi-Fi computer access, and even an independent cellular tower.

Use All Resources at Hand

During significant disasters, local governments need additional personnel and equipment that can be obtained from the private sector. Those who could be tapped include the 2.3 million contract and proprietary security officers and almost 800,000 sworn officers in the United States. In addition, there are trained paramedics, firefighters, retired first responders and police officers that can be trained for modest compensation to fulfill emergency reserve positions.

Similarly, most regions have highly skilled leaders with proven experience who are willing and able to volunteer their services to such regional reserve forces. This group includes retired senior military officers and top executives of major corporations, among others. Military and business leaders frequently transition to public sector positions, contributing their skills and expertise. Examples include New York Mayor Michael Bloomberg, New Jersey Senator Frank Lautenberg, Governor Joe Corzine, General Colin Powell, and Pennsylvania Congressman Joe Sestak. Other mid-level executives also may volunteer. These reserve organizations will serve as a regional force since most disasters extend beyond jurisdictional boundaries. Equipment needed in an emergency, like fire engines, ambulances, trucks, and bulldozers, can be relinquished from their private owners to the reserve unit under contracts prepared in advance.

When a disaster strikes, public emergency resources cannot satisfy the extensive needs, but they can be supplemented by volunteers, charitable institutions and non-profit and for-profits organizations. Innovative state and local leaders have demonstrated that extensive resources are available in the private sector and can be mobilized in a disaster. With proper preparation and coordination, it is possible to integrate the private and the public emergency forces.

Now that we are more aware of the possibility of both terrorist attacks and natural disasters, advanced planning, such as developing training for public and private personnel, building depots for supplies and creating mutual aid agreements can help lessen their impact. Such advanced planning, along with engaging the entire community, will help ensure a rapid and effective recovery from disasters.

Erwin Blackstone and Simon Hakim are professors at the Department of Economics and the Center for Competitive Government at Temple University, Philadelphia. For more information on public-private partnerships, contact Hakim at [email protected].