While the ranks of chronically homeless individuals are shrinking in many cities, the number of families without permanent shelter has grown 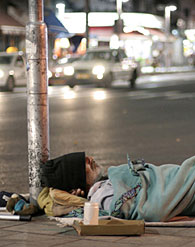 While the ranks of chronically homeless individuals are shrinking in many cities, the number of families without permanent shelter has grown, as has demand for food assistance, according to the Washington-based U.S. Conference of Mayors’ (USCM) Annual Hunger and Homelessness Survey. The survey respondents say the reductions are a sign that plans to greatly reduce or eliminate chronic homelessness in 10 years are working, but the recession has increased demands for services for homeless and hungry families.

Of the 25 cities providing data for USCM’s survey, 16 reported a leveling or a decrease in homeless individuals. At the same time, 19 cities reported an increase in family homelessness, and cited a lack of affordable housing, poverty, domestic violence and unemployment as reasons for the increase. “Even working families are increasingly at risk for hunger and homelessness as a result of the crippled economy and rising unemployment and foreclosures,” said Gastonia, N.C., Mayor Jennifer Stultz, co-chairman of USCM’s Task Force on Hunger and Homelessness.

In its biennial count of the homeless last January, Los Angeles saw a 27 percent reduction in homeless individuals and a 68 percent decrease in homeless families compared to 2007. Over the next five years, the city plans to add more than 2,100 permanent supportive housing units that offer a long-term place for homelesss people to live with easy access to social services. The county has spent $100 million on homelessness initiatives, and the city has set aside 4,200 Section 8 vouchers for homeless people.

Arnold says his community’s evolving approach is seeing results. “We’ve moved from a ‘just being there’ perspective to recognizing that the goal is to get them into housing and give them the resources and the skills that allow them to remain stably housed,” he says.