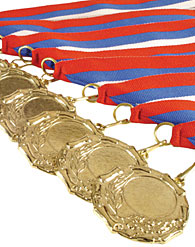 The National League of Cities (NLC) presented its 2009 Awards for Municipal Excellence at the Congress of Cities in San Antonio in November. The winning projects exemplify excellence in city governance, best practices in municipal policy, and model programs that improve the lives of residents.

Nominated programs are evaluated by a panel of judges on several criteria: successful public-private partnership ventures; productive citizen and community collaborations; effective management of municipal resources (public or private); innovative government policies; project implementation with tangible results; and the ability to replicate the project in other cities. Eight winners are chosen from four population categories, with a gold and silver winner in each category. The winners receive a donation to a local non-profit organization of their choice.

Strengthening the Community and the Economy through the Arts

The city’s Department of Cultural & Public Affairs offers more than 40 special events annually with free admission. Nearly 40 percent of the year’s event funding comes from Cultural Season Sponsorships, which range from $500 to $5,000. Sponsors are provided year-round exposure in printed materials and press releases. In 2004, the first year sponsorships were offered, contributions totaled $9,000. In 2008-2009, sponsorships increased to more than $60,000.

Neighborhood Renaissance Savannah grew out of concern that many inner-city neighborhoods were in a downward spiral. The program includes building partnerships; participatory planning; aggressive property maintenance; derelict and vacant property acquisition; housing, economic and infrastructure investment; and sustainable design. Since 2000, the program has funded more than $150 million in housing improvements in three Savannah neighborhoods. It plans to invest roughly $100 million more in a fourth neighborhood.

The city’s Workforce Investment Board and Youth Council worked with public and private organizations, and young adult residents to reinvent some of the city’s youth service strategies that combat youth disconnection from the labor market and from productive education activities. The program incorporated the opinions of young adults to increase participation on the city’s Youth Council and develop labor market materials. The program established a much more relevant youth-driven services strategy.

Homebase is a network of 13 homelessness prevention centers funded by the New York City Department of Homeless Services and operated by community-based organizations. Homebase provides case management services and financial assistance to help families avoid entering shelters. The aid may include short-term financial assistance, job training, financial education, legal services, and household repairs. From September 2004 through April 2009, the program served more than 14,000 households, and more than 90 percent did not enter shelters within one year of service.

The Estes Valley Restorative Justice Partnership was created to reduce crime and disorder by applying the principles of Restorative Justice. It seeks to improve victim services, reduce arrests and recidivism, and allow community members to play a more visible role in the justice process. It is a community-based program designed to repair harms caused by crime and create a balance of justice equitable to the victim, the offender and the community.

The Burnsville Surface Water Treatment Plant (SWTP) Project is a public-private partnership formed to collaboratively design, construct and operate a new SWTP that recovers, conveys and treats groundwater discharging into the Kraemer Mining and Materials quarry for potable use in Burnsville and nearby Savage. The ultimate goal of the Burnsville SWTP Project is to conserve at least 4 million gallons of groundwater per day and increase the groundwater head conditions while meeting the increased water demand needs within both communities. Until the SWTP is fully operational, the cities have been able to idle wells and postpone drilling new wells that could have further stressed resources.

The Green Seattle Partnership is a collaboration between Seattle, Cascade Land Conservancy and residents to restore 2,500 acres of forested parkland. The areas are failing because existing trees have reached the end of their natural lives and invasive plants have choked out the next generation of trees. The partnership is a 20-year effort to mobilize Seattle residents to donate 2 million volunteer hours and plant 200,000 trees by 2025. Since the program’s inception in 2004, more than 385 acres have entered restoration with the support of more than 242,000 hours of community volunteer support. The Cascade Land Conservancy has launched similar programs in other cities in the region: Green Kirkland Partnership (2005), Green Tacoma Partnership (2006) and the Green Redmond Partnership (2008).