Riverside, Calif., Mayor Ronald Loveridge, who was recently elected president of the National League of Cities, discusses the effects of the recession on cities and what will happen after the recession is over. 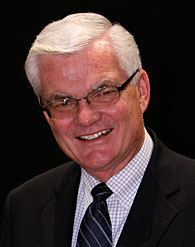 In November, members of the Washington-based National League of Cities (NLC) elected Riverside, Calif., Mayor Ronald Loveridge as the league’s president. Riverside is located in a part of southern California with some of the state’s highest foreclosure rates. The city’s budget has been reduced from $228 million three years ago to $190 million in 2009. American City & County talked to Loveridge about his goals during his NLC presidency, the effects of the recession on cities and priorities after the recession is over.

Q: What are your plans for NLC during your administration?

A: In 2010, the [central] work of cities will be on the recovery and on jobs. That’s the overarching issue that faces [cities]. Cities are the wealth of nations. Economic development and quality of life are both experienced in cities, [and] until cities recover, the country and the country’s economy are not going to recover. There are a variety of things that are going on within the economy. There is the whole question of the American Recovery and Reinvestment Act (ARRA), where we are going with transportation, housing and infrastructure. So, there are national issues [that] have job consequences. The overriding issue, as mayor of my city, is representing the [more than] 19,000 cities and town [in the United States] on the economic recovery.

Q: Has ARRA helped cities at least mitigate their losses in the recession?

A: It has been a help, but I think less so than what cities were expecting. Much of the money has not come yet. For example, what I think a transformative initiative, the [Energy Efficiency and Conservation Block Grant (EECBG)], money has not come from the Energy Department. I read someplace that so far only about 1 percent of [ARRA] has provided funds for cities, and [for] some of the programs we’re looking to, money has not yet arrived. In many ways, much of the funding is before us.

Q: What problems have prevented ARRA funding from getting to cities?

A: [Some programs, such as the Community Development Block Grant, follow familiar disbursement formulas] have an established criteria process. The newer formula programs are more difficult [to implement] because they have to develop new tracts and new criteria and new oversight procedures. The difference [in relation to the EECBG] with the Energy Department is that they have created an entirely new program. And we’re now toward the end of November, and [EECBG] money is not yet here.

Q: What’s the next order of business for cities after they recover from the recession?

Q: When do you think economic conditions may improve for cities?

A: We’ve been talking about 2012 or 2013 [as dates for city economic recovery]. We have an economist who has identified 2014. The real problem is the job problem. You have a sense that the economy will pick up, but the question is what kind of jobs will be here.