The City Center in West Palm Beach, Fla., was one of 11 winners of the 2009 America's Crown Communities excellence awards. 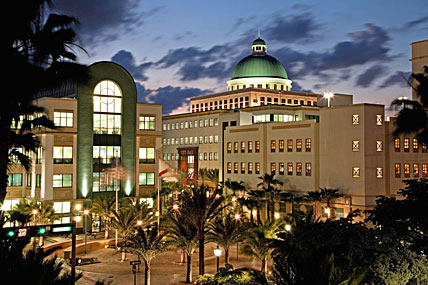 On April 16, 2009, hundreds of West Palm Beach, Fla., employees paraded from the old City Hall to celebrate the grand opening of the City Center. The 270,000-square-foot facility, which occupies an entire block downtown, houses all city offices in one location and includes a library and museum.

The idea for the project began 12 years ago, when the city began outgrowing its City Hall. Departments were located in offices scattered throughout the city, and, at about the same time, the 34,000-square-foot downtown city library, which was built in 1962, was filled to capacity. 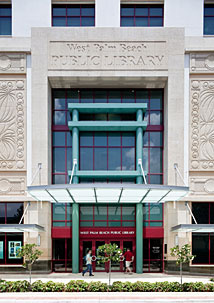 West Palm Beach commissioned The Urban Land Institute in 2003 to study the downtown district and recommend ways to capitalize on its core marketable areas. That study recommended creating a civic center that would combine the downtown library and city hall, as well as improve the physical connection between downtown and the waterfront. The city acquired the site of a dilapidated former department store for the new civic complex.

Funding for the project came from several sources. The Community Redevelopment Agency used tax increment financing to fund construction of the 85,000-square-foot library, 300-space parking garage, 35,000-square-foot Photographic Centre and 4,000 square feet for leasing to private businesses. The library also received a $500,000 public library construction grant. The 150,000-square-foot City Hall construction, which includes a 150-seat state of the art City Commission Chambers, was funded by a combination of savings that were accumulated over the years for its construction, contributions from the enterprise funds from the city operations that were moving into the facility, and a special obligation bond.

City Center, which incorporates many environmentally friendly features, includes a “one-stop shop” for permitting and plan review, several meeting rooms, an auditorium, and is equipped with free Wi-Fi. The library has three times as many public computers than were previously available, RFID technology for books, an advanced book handling system and self-check out stations. West Palm Beach expects to save $5.4 million over the next 30 years by consolidating city operations.