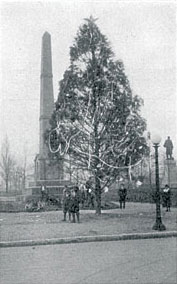 In the December 1914 edition of The American City, 100 cities from New York to Los Angeles reported celebrating the holidays with municipal Christmas trees. In an editorial comment, the magazine stated that the public Christmas tree “has been called the most delightful innovation of the century,” and it highlighted a variety of ways cities organized their celebrations.

Pittsburgh dedicated $500 for its tree, and a 26-member Christmas Tree Committee appointed by the city council president collected contributions from residents to supplement the fund. An evergreen from Vermont was donated by a private firm and set on a private lot with free access to the public. The Rhode Island Congress of Mothers managed the Providence Christmas tree celebration and solicited donations from the community, “so that the city might feel that the tree was indeed its own.”

The first municipal Christmas tree celebration in Syracuse, N.Y., was organized by the local Consumers’ League with financial support from the Chamber of Commerce, the Rotary Club and the newspaper. The New York State School of Forestry supplied the 50-foot tree from its nearby reserve. The local lighting company donated lights and the electricity for the tree.

In describing Syracuse’s first Christmas celebration, Mrs. Horace Eaton wrote, “Its greatest possibilities appear to lie in developing the already deep interest of the foreigners within our gates. Their pleased surprise when asked to take part was noteworthy, even though their lack of musical organization … prevented acceptance this year. … The promise to collect and train Polish, Italian and German choruses for next year go far to encourage the belief that next Christmas members of all races within our city shall hear carols sung in their own tongue and feel themselves truly citizens of a new fatherland. The ideal municipal Christmas tree should draw to it all classes and kinds of citizens, whether rich or poor, native or foreign-born. It should symbolize to them and awake in them the spirit of brotherhood, while they voice, together with the message of peace and good will, renewed loyalty to their common city, state and country.”