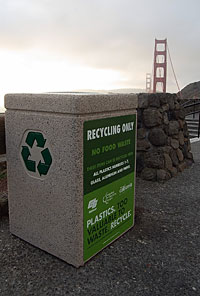 “One of the goals of Caltrans is stewardship — to preserve and enhance California’s resources and assets,” said Caltrans Director Randell Iwasaki. “Caltrans is committed to keeping California’s environment clean and pursuing every opportunity to recycle. This partnership will educate the public on the importance of recycling.”

The partnership is being launched with the placement of new recycling bins and corresponding educational signage at the H. Dana Bowers Roadside Rest Area in Marin County, just north of the Golden Gate Bridge. The partnership will expand to other Caltrans rest stop locations in 2009 and 2010.

“Plastics do not belong as litter on our roads or in our waterways,” said Steve Russell, vice president of plastics for the American Chemistry Council. “Many plastics, including much of what will be collected in the new Caltrans bins, are recyclable. We know Californians want to recycle more. This new partnership highlights our commitment to work with government and nonprofit groups to help make our environment cleaner.”

Until now, there has not been a widespread campaign that makes it easy for travelers to recycle and, at the same time, discourages them from littering. More than 100 million motorists visit California’s 87 roadside rest areas every year.

“Keep California Beautiful is excited to support this public-private partnership,” said KCB Executive Director Christine Flowers-Ewing. “These new recycling bins will allow travelers to help us work towards our goal of making California the cleanest state in the nation.” 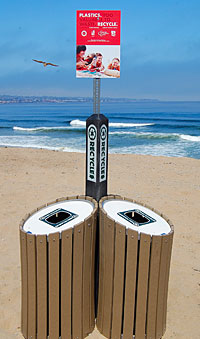 The partnership has placed more than 500 seasonal and permanent recycling bins at 19 coastal locations. Additional recycling bins have been placed in the cities of Brentwood and Woodland.

“California State Parks welcomes the opportunity to partner with other government entities, the private sector and Keep California Beautiful to promote the value of recycling plastics and other materials,” said State Parks Director Ruth Coleman. “This program will help to prevent litter on beaches that costs taxpayers dollars to collect.”

About 79 million people visited California’s State Parks during the 2006/07 fiscal year, with many traveling to visit the 320 miles of oceanfront property managed by State Parks. Until the partnership was created, there has not been a widespread public education program that encourages park visitors to recycle plastics instead of placing them in the trash or leaving them behind.

While there are about 2,100 certified recycling centers in California, some Californians still treat plastics as trash instead of a valuable material that is readily recyclable. Additional information on the program is available at the partnership’s web site at www.2valuable2waste.com.

The American Chemistry Council, based in Arlington, Va., is a trade group that represents various chemical industries nationwide.

Sacramento, Calif.-based Keep California Beautiful is a non-profit organization whose goal is to combine individual, community, and corporate efforts in order to help Californians conserve resources, stamp out litter, and reduce waste output. Through programs like the Beverage Container Recycling Program, KCB helps cities and counties implement and track effective litter prevention and recycling programs in its efforts to stamp out litter from California.