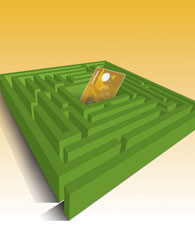 As of June, a half dozen counties in Florida and at least another half dozen in various other states have decided to stop accepting Visa cards for tax payments because of the credit card company’s new rules about convenience fees and its enforcement practices. The new operating procedures have the potential to affect the majority of cities and counties that accept credit cards in the near future.

The credit card industry experienced a five-fold increase in transaction volume from 1980 – 1990, and that volume was reflected in city and county operations as residents began more frequently using credit cards to pay for taxes and services. Most local governments assessed transaction fees for credit card payments to cover the processing expenses because, unlike retailers, cities and counties are not allowed to build in or absorb those costs, especially on tax payments.

In 1993, Visa and MasterCard realized that surcharging had become a widespread practice in local governments, and because their rules prohibit surcharges, they ordered them to stop the practice. Around the same time, Ticketmaster was emerging as a dominant provider of online and touch-tone phone (also called Interactive Voice Response or IVR) ticket sales, and began charging a surcharge on its transactions. Because of the growth of companies like Ticketmaster, MasterCard and Visa changed their rules in 1994, to allow “convenience fees” for transactions done through a “truly more convenient” form of payment, such as the Internet, IVR and kiosks. The convenience fee rules were intended to encourage online payments with credit cards.

Visa’s rules prohibited a third party from assessing a convenience fee on the seller’s behalf and required the fee to be fixed or flat regardless of the transaction size. That did not stop a now-flourishing group of third party vendors from offering online payment services to state and local governments with percentage-based convenience fees. That is where the confusion starts, as many cities and counties have been offering online payments to their residents through third parties, often with percentage-based convenience fees, for years, without any enforcement of the rules from Visa.

Until late 2007, MasterCard and Visa’s rules also required the convenience fee to be assessed equally for all types of payment. Initially, that worked well because credit cards were the only method of payment for online and IVR transactions. However, the emergence of e-check and automated clearing house (ACH) or electronic funds transfer (EFT) for online payments in 2003 complicated the situation. ACH and EFT, terms used interchangeably, both refer to the manner in which funds are electronically sent through the banking system. ACH/EFT is prevalent for recurring bills because it usually costs less to process than credit cards. As a result, many local governments, or third parties on their behalf, began offering lower convenience fees for online e-check and ACH payments, and again, there was little enforcement by either MasterCard or Visa.

In response to those issues, MasterCard changed its convenience fee program in November 2007. The company’s new convenience fee rules apply to government and educational entities for all payment channels with no restrictions on other forms of payment. The credit card company allows convenience fees to be assessed as a fixed or percentage-based fee by either the local government or a third party on the government’s behalf.

American Express followed suit in March 2008, and Discover always has allowed a surcharge. That meant that state and local governments that assessed percentage convenience fees and lesser fees for e-check and ACH were now compliant with MasterCard, American Express and Discover. More importantly, it also meant governments could assess convenience fees for face-to-face transactions with the three card brands, something previously prohibited.

In October 2008, Visa announced a new Tax Payment Program, which requires state and local governments to register and qualify to participate. Once enlisted, governments or their third party vendors can assess percentage convenience fees or service fees on tax payments only. The fees are allowed for all channels of payment and without restrictions on other forms of payment.

The credit card company has two new requirements to participate in the program. First, governments must offer a Visa consumer debit convenience fee rate of no more than $3.95 regardless of the amount of the transaction. Second, the convenience fee must be submitted and processed as a separate transaction.

That process requires special software that can store the bank identification card numbers that identify consumer debit cards and that can calculate the convenience fee and submit it separately. One vendor that processes online payments in two dozen states is charging fixed fees (e.g. $2.50) and then an additional percentage before submitting it as a single transaction. That practice is expressly prohibited in the Visa Tax Payment Program. Because Visa has begun enforcing its Tax Payment Program rules, any state or local government may be notified by their third party vendor or by Visa that they cannot accept Visa until they comply with the requirements.

If cities and counties want to accept Visa, with convenience fees, for face-to-face transactions, they can only do so for tax payments, which must be “stand alone” payments. They cannot process a tax payment together with other non-qualifying payments.

Further, Visa’s Tax Program requires cities and counties to have a merchant account for their transactions. Standard merchant agreements historically have been designed for retailers. Most contain provisions for funds to be held and liens put on those funds, terms not allowed by law in many states. So, the merchant agreement contract becomes one of the central issues for cities and counties that want to accept credit card payments in their offices.

“Some of you will soon be asked to sign (or you have already signed) a new contract replacing the old, much simpler, contract,” says Mark Kiester, audit director for the Alachua County, Fla., Tax Collector. “The new contract is not government friendly and should not be accepted. Our vendor was very reluctant to accept a palatable contract with us pursuant to Florida government needs and requirements. Other vendors simply don’t understand the rules and actually recommend that you violate them… regardless of the fact that one Florida county paid dearly when they violated the rules under guidance by their vendor.“

More changes are sure to come to further ease government credit card acceptance rules. Visa, facing pressure from county collectors that have decided not to accept the company’s cards, is likely to reconsider its policies for state and local governments. In fact, on July 28, 2008, Visa announced a reorganization of its top management. Less complicated rules and more “government friendly” contracts soon will become the norm.

Jim Plunkett is founder and president of Government Payment Processing, a privately held division of PowerPay, located in Portland, Maine. Jim can be reached at [email protected].