From reorganizing all departments to working through huge deficits to balance the budget, County Administrator Jeff Greene has spent the last year moving El Paso County, Colo., through troubled times. 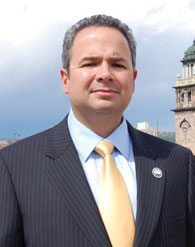 Jeff Greene does not like to be told “no.” That does not mean he is difficult to work with. On the contrary, peers of the El Paso County, Colo., county administrator admire his skills as a collaborator. But, when running a county on a budget that has decreased 26 percent over the past four years, Greene cannot take “no” for an answer if he is going to help the county operate efficiently and effectively.

“I just don’t want to hear, ‘That’s how we’ve always done it,'” Greene says. “Even though we’ve gone down a path before, that doesn’t mean we can’t introduce a new variable that will change the outcome.”

As county administrator, a position he has held since January 2007, Greene has defied the status quo. In 2008, he reorganized the county, streamlining it from 13 to four departments, saving the county an estimated $5.2 million annually. He also formed a Citizens’ Budget Oversight Committee to communicate better with residents and glean their ideas. Then, there are the road improvements, partnerships between the county and Colorado Springs, and an effort to relieve jail overcrowding through alternative treatment for drug offenders. As a leader who is succeeding in redirecting a ship that was veering into dangerous waters, Greene demonstrates the high ideals necessary to govern counties effectively in the current economy, earning him the title of American City & County’s 2009 County Leader of the Year.

While El Paso County has the largest population in Colorado at 600,000 residents, the conservative community has the lowest property taxes of the 10 most populous Colorado counties and per capita tax support of $189. Like all Colorado counties, it operates under the state constitution-mandated Taxpayer Bill of Rights (TABOR), which limits government spending and intake of tax revenue based on growth. Tax increases require voter approval.

As a result, El Paso County depends heavily on sales tax collections, which now are below what they were in 2005. “We’re barely covering the mandated services we legally have to provide,” says Nicola Sapp, director of Budget and Economic Development for El Paso County. “Jeff is thinking proactively and wondering where we should be in 10 or 20 years instead of just worrying about the next year or two, at a time when you’re treading water to get through the next year.”

Facing those conditions, some see Greene’s ability to balance the $230 million 2009 budget and get it approved by the Board of County Commissioners as one of his greatest accomplishments so far as county administrator. “I didn’t think there was any way Jeff was going to pull it off,” says William Louis, county attorney, who works closely with Greene. “There were too many competing interests, but he managed to do it.”

Balancing the budget required creativity and painful decisions, such as the structural reorganization of the county’s 13 departments. Greene recognized that many of the departments simply could not sustain themselves. The parks budget, for instance, had plummeted from $3.2 million in general fund support to a little more than $200,000. So, he began looking for efficiencies between departments and consolidated them into four: budget and economic development, community services, public services and support services.

Unfortunately, that meant reducing 300 staff positions and eight management positions. In addition, some of the employees who remained had to assume lesser titles and many had to take on new responsibilities. “Employees are breaking their backs to provide the same level of service. We’ve had to redefine the services we are able to provide,” Greene says. “Our directors were willing to make that type of change if we could sustain operations.”

Greene did not make any decisions without considering the long-term implications. “I know he lost a lot of sleep over the decisions that had to be made,” Sapp says. To keep up employee morale, Greene and his closest staff meet with employees quarterly and recognize their efforts. They also encourage employees to ask “tough questions” and answer them directly without “sugarcoating it or giving long-winded answers,” Greene says. “We lost some good people, and when you put faces with the people, you stay up at night wondering what’s going to happen to them.”

Creating efficiencies for organizations is nothing new to Greene. He left a management position with PacifiCare Health Systems to join El Paso County in 2001 as the employee benefits administrator and manage its employee healthcare program. Greene quickly discovered it would be difficult to control costs while working within the confines of the managed care industry. He observed that some employees could not even afford to insure their families and take their children to pediatricians regularly or pay for medication.

However, making the transition from the private to public sector was a learning experience for Greene. “I was used to things moving very quickly and wasn’t used to a democracy,” he says. “The county administrator took me aside and said I needed to partner with people if I wanted to be successful. So, I had to rethink my strategy.” Greene points out that building consensus is now one of his main jobs.

That consensus extends beyond the walls of the county government into the community. When the county was struggling to balance its budget last year, Greene assembled the Citizen Budget Oversight Committee, a team of 23 members representing various industries. His goal was to create transparency and better communicate with residents while also giving them a chance to participate in deciding how to fund county services. Over the course of 60 hours of meetings, the residents reviewed the county budget, prioritized services and made recommendations on whether programs should be funded, cut or administered by another organization. The Board of County Commissioners took the committee’s recommendations into consideration when deciding which services to cut.

“We were all a little skeptical at first, but it worked well,” says Monnie Gore, El Paso County Deputy County Administrator. “Now, you have citizens that have learned how the county works and what the issues are.”

Last year, Greene also worked with Jim Bensberg, chair of the Board of County Commissioners, to change the way the county collects use tax on building materials. They suspected the county was losing revenue to builders who were shipping materials in from out of state and not paying taxes. Greene helped alter the collection process so builders now have to pay their use tax on the project when they get a building permit.

The county also just broke ground on a detox facility that will prevent crowding in jails and hospitals. In 2001, Greene began developing a model with a consultant to provide a continuum of care for inebriated individuals being a nuisance to the public. The model involved working with the sheriff, Colorado Springs, hospitals and a provider-run detox facility. The arrangement was functioning well until budget issues caused the county to reduce funding to the facility by more than 50 percent in 2007 and completely eliminate funding in 2008. The model began to deteriorate, and, though the United Way provided stopgap funding, at the beginning of the year, the arrangement completely collapsed.

In response, the sheriff stepped forward and said he would work to get a detox facility built if Greene could find a local hospital to work with them. The county is now moving forward with the new model. “There was a lot of maneuvering politically with the county, city, two hospitals and law enforcement,” Gore says. “Jeff’s strong point was getting everyone to the table and working the negotiations.”

Greene is quick to point out that his achievements are far from glamorous. Take, for instance, a road in the eastern part of the county leading to a school. Development in the area was supposed to fund the school and the road. Although the building was completed, the road never was, leading to constant calls to commissioners from residents concerned about their children’s safety. With the county budget already stretched thin, Greene asked the school district to help pay for the road to be chip-sealed.

The district argued that the road was the county’s responsibility and pointed to laws on why it could not help, Greene says. To get around that “no,” he asked if the district would consider in-kind services and allow the county to bring its vehicles to the district’s facilities for fuel and maintenance. The two parties reached an agreement. “He helps constituencies see it’s to everyone’s advantage if they work together,” says Stephannie Finley, president of Governmental Affairs and Public Policy for the Colorado Springs Chamber of Commerce. “He’s good at galvanizing people on issues.”

As the economy remains uncertain, Greene’s next challenge is to encourage economic development and increase tax revenue by reducing the barriers to doing business in the community. For instance, if a company has an issue with a traffic signal not working properly near its offices, the county will make adjustments and work with the business. “We have to plan for other types of economic development while being respectful of conservative values that don’t offer cash incentives to businesses to locate here,” Louis says.

Until the economy improves and tax collections increase, running the county on the current budget — or less — will be a struggle every year. Yet, Greene’s peers have faith in him. “He’s done an amazing job in this short amount of time and will continue to do great things,” Sapp says. “If given the resources he needed, there’s no end to what he could accomplish.”

Past County Leaders of the Year