An assault on winter 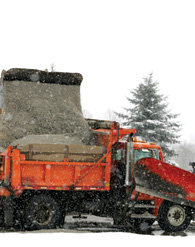 When winter storms hit Utah, they can freeze all movement on the state’s nearly 6,800 miles of roads. Those include two major transcontinental interstate highways and a major link of the CANAMEX corridor — and just for fun, they all cross the unforgiving Rocky Mountains. The weapon of choice to keep traffic flowing is aggressive plowing, with salt as the primary deicing agent and salt brine as the primary anti-icing chemical. All 79 of the Utah Department of Transportation‘s (UDOT) maintenance stations use salt distributed behind specially built plows to keep ice off the highways. The linchpin of the system, however, is the statewide salt storage management program.

Because bulk salt must be kept dry to avoid clogging in spreaders or becoming a problem when dissolving in salt brining facilities, the state’s Engineer for Maintenance Richard Clarke began working on a program five years ago to upgrade salt storage. Sensible salt storage is not just covering salt piles, it is protecting the environment from saline runoff, groundwater infiltration and fugitive salt dust. “We faced a looming environmental crisis if we kept managing salt as we had in the past,” Clarke says.

Joining with Bill Jusczak, UDOT architect and facilities manager, Clarke formulated a multi-year plan to eliminate saline runoff and provide dry storage. To capture and retain all runoff from the maintenance stations and to prevent infiltration, Jusczak and Utah Department of Environmental Quality officials determined that UDOT should keep all saline waters in impermeable retention basins. Runoff retention had been funded through maintenance yard repair allocations, but little money was available to build salt storage facilities. Nevertheless, the team began considering ways to build a statewide system of salt storage facilities.

Sites for the facilities were evaluated and ranked according to climate and the area’s need for salt. The sites needing the most salt included runoff and infiltration mitigation information as well. Existing budgets were committed to the highest priority locations. As those facilities were completed, reductions in salt waste and the truck plow-route cycle time were noted.

As the first salt facilities were being built, Clarke and Jusczak began to find funds for building new maintenance stations. Traditionally, they were built when developers offered to fund a facility in exchange for UDOT-owned property. Over time, the average building age had reached 48 years, and most of them were functionally obsolete.

Clark and Jusczak found the money to build the maintenance facilities using two state mechanisms that had been used primarily to construct major public and higher education facilities: the Capital Improvement Program and Utah State Building Board funds. They found additional funds through a previously untapped source. The Utah State Transportation Commission was authorized to use a portion of fuel tax revenues to fund replacement buildings.

Using those funds, new maintenance stations began to be built, each with a salt storage facility. A typical salt building costs less than $100,000. UDOT started an accelerated salt storage building construction program using funds from annual building maintenance and minor construction programs, along with modest operational savings. The initial goal was to build eight salt storage buildings per year, but the number increased because construction costs for the site-optimized salt buildings were less than estimated, and simplified building systems and repetitive designs reduced change orders and delays.

A total of 15 salt storage buildings were built in fiscal year 2007 and another 18 in fiscal year 2008. “We have exceeded our expectations for improving salt management and have significantly reduced salt water runoff risks as a result of Rich and Bill’s innovative approach to seemingly disconnected problems,” UDOT Director of Operations Tracy Conti says.

Clarke and Jusczak realized there were two main factors in choosing the most appropriate type of building:

The buildings are simple, with no power or utilities, except a pole-mounted yard light outside the building. Generally, the buildings are three-sided with an open bay facing south or west to take advantage of winter solar heating. Front-end loaders are parked inside the salt shed, reducing refilling times.

With no frills, the facilities are functional and spacious enough to store and load salt efficiently, while using a minimum of materials and making a small footprint. The new buildings look like existing buildings in the area and use the natural colors of the surrounding environment. As a result, buildings in the red rock country of southern Utah are a different hue than those erected near lush, 10,000-foot elevation mountain meadows. “Just because we are on tight budgets doesn’t mean we have license to be insensitive to the environment around us,” Jusczak says.

Each year, all stockpiles, covered and open, are filled before November, with some deliveries starting in August. Salt procurement contracts expire in June, and new contracts are in place by July 1, the state’s new fiscal year.

In practice, the design philosophy works; station managers were trained to watch their salt stockpiles and order more before they deplete them. UDOT now has covered storage for about 75,000 tons, roughly one-third its annual salt use.

Clarke intends to continue the salt storage building program because it has allowed UDOT to spend more time plowing and less time fighting crusted-over salt. “Getting the traveling public where they need to go safely and at the lowest possible cost is our main concern,” he says.

How cold is it?

Historically, maintenance stations in the mountains had the most severe clumping problems because overnight temperatures in some locations fall to 20 degrees Fahrenheit or lower. One Utah salt storage station is located at Logan Summit, less than a mile from Peter’s Sink, which is among the coldest places in the continental United States where an all-time low temperature, 69 degrees below zero, was recorded on Feb. 1, 1985.