America's local and state governments annually spend more than $10 billion on energy, and much of it is wasted. Driven to reduce energy consumption and 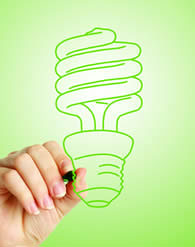 America’s local and state governments annually spend more than $10 billion on energy, and much of it is wasted. Driven to reduce energy consumption and its environmental effects, many are moving aggressively to “power down.”

“The idea that sustainability is important is permeating the nation,” says John Soladay, director of environmental health for Albuquerque, N.M. “There are 850-something cities that have committed to reducing greenhouse gases. We’re all scrambling, but at least we’re moving.”

The recessionary economy has added another reason to become energy efficient, says Alan Shark, executive director of the Washington-based Public Technology Institute. “Everyone is in this hunker-down mentality, and governments don’t want to ask residents for more money when they are already strapped,” Shark says. “People want to do the right thing and save the planet, but when economic reality faces people, they become more pragmatic.”

Albuquerque has been busy in the five years since three-term Mayor Martin Chávez signed onto the bipartisan Mayors’ Statement on Global Warming, an early version of the Washington-based U.S. Conference of Mayors climate protection agreement. To start, the mayor assembled an executive-level “green team” of department directors and others to build a plan toward sustainability — reducing greenhouse gas reduction, the amount of natural resources burned and dependence on foreign oil, Soladay says. Nine months later, a sustainable development strategy with eight core components emerged. “This plan in itself is a huge step for most cities, but it establishes a base framework for moving ahead,” Soladay says.

Though environmental sustainability has been a main focus for the mayor, Albuquerque has benefited from a succession of energy conservation initiatives dating back to the late 1980s, when the city began converting part of its fleet to compressed natural gas (CNG). “By the early ’90s, we recognized the importance of doing things like changing out light fixtures and ballasts, so we funded a line item to do that,” Soladay says. “By the late ’90s, for bigger and more innovative projects, we adopted a program setting aside 1 percent of total capital improvement funding to target energy conservation.”

In 2007, the mayor and city council increased the set-aside to 3 percent, directing $4.6 million toward infrastructure energy improvements. “Albuquerque is the only city I’ve found that actually funds their improvements that way,” Soladay says.

The city also tracks its transportation-related energy use and greenhouse gas emissions and has reduced them. Today, more than half the city’s fleet operates on alternative power sources — E85 (85 percent ethanol/15 percent gasoline), B20 diesel, CNG and hybrid engines. “We developed internal purchasing policies that mandate not only alternative fuels, but the most efficient vehicle for the application,” Soladay says. “There’s a strict review process attached to the mandate, and we put our green report card on our city’s Web site to show that the numbers are verified, can be duplicated and measurements are believable.”

Other savings come from energy-efficient traffic signals and lighting on streets and parking lots. “The payback is very short on LED traffic light conversions,” Soladay says, especially now that costs have been reduced from $150 to below $50 per 12-inch light fixture. Conventional bulbs are still cheaper at $15 each, but they have to be changed every 18 months, versus every 10 years for an LED.

Going green also is the new wave for the old New England industrial center of Springfield, Mass. Spurred by the 2006 election of a new mayor, Domenic Sarno, the city has moved aggressively over the past two years to reduce energy consumption in its fleet and in its aging infrastructure, where the average building age is 54 years and the oldest school dates back to 1896.

As a key component of its energy-saving efforts, Springfield hired Buffalo Grove, Ill.-based Siemens Building Technologies to replace the ancient oil-fired boilers in more than two dozen city buildings, and install automatic light sensors and energy misers on computers and vending machines. The heating system upgrades, financed through city bonds, will pay for themselves in 12 years, and electricity consumption has been cut by 2.5 million kilowatt hours.

Springfield is taking other steps toward the city’s sustainable future, Sarno says, including piloting a single-stream recycling program, hosting an annual green forum, and hiring an executive to coordinate green initiatives, such as green design, sustainable development and attracting green business to the city. The city also has announced a pilot plan to purchase four hybrid Ford Escapes for the parks division. Solar energy — even in the northern, snow-belt city — also is playing a role. The city has installed solar-powered trash compactors from Needham, Mass.-based BigBelly Solar and soon will request bids for photovoltaic panels on school buildings.

Even the small city of Palm Desert, Calif., has made itself a force for energy conservation — in a desert locale where the demand for summertime air conditioning consumes 150 percent more power than other areas of southern California, according to Patrick Conlon, director of the city’s office of energy management. With a self-imposed deadline of December 30, 2011, the city has committed to reducing energy consumption by 30 percent — and that includes homes and businesses.

Palm Desert’s government already has made significant progress toward its goal. Harnessing 350 days a year of sunshine, about half of government’s electricity comes from photovoltaic arrays. Additionally, all new government buildings must attain at least a silver rating by the Washington-based U.S. Green Building Council‘s Leadership in Energy and Environmental Design (LEED) Green Building Rating System.

Palm Desert also is challenging the private sector to cut energy use by 30 percent at the end of 2011, and it is offering to fund private-sector energy conservation through unlimited government-backed loans to businesses and homeowners. “Time and again people say, ‘I know I have a 25-year-old air conditioner that needs to be replaced, and I know my energy bills are $800 a month, but it’s not a good time to get a home equity loan to put in a new $10,000 air conditioner,'” Conlon says.

City officials worked with local state assembly representative Lloyd Levine to create the Energy Independence Act that passed in July to allow private-sector energy conservation loans. Now, cities and counties can set up special energy districts, where business and residential property owners can borrow from the government and pay back the loans through their property taxes. Furthermore, local governments in California now can sell bonds to fund their private-sector loan programs.

To jump-start the loan program seeded by grant funding from the California Public Utilities Commission, the city council appropriated $2.5 million from its general fund in late August. “We have already spent $1.6 million, and people are standing in line for the loans,” Conlon says. “The bad news is I have to ask the city council for more money. Bond packages take about 90 days to put together, and I don’t want to interrupt this program.”

Palm Desert offers 20-year loans for improvements at a 7 percent interest rate, with a $5,000 minimum and no maximum. Authorized improvements include solar panels, natural gas fuel cells, white roofs and EnergyStar refrigerators. “It’s not a personal loan, so we don’t have to concern ourselves with credit history, loan-to-value ratios, and so on,” Conlon says. “It’s just an assessment on the property, just like a curb or gutter or sewer assessment, and it stays with the property.”

Governments that reduce energy consumption and improve sustainability do more than plan and implement good programs; they dedicate leaders to the task and ensure accountability. “Where you find successes, you find not just leadership, but what I call championship — an energized cheerleader with substance who is out there keeping the energy issue alive in a meaningful way,” Shark says.

In Springfield, Mayor Sarno’s leadership approach has combined energy conservation, environmentalism, urban redevelopment, and an emphasis on the arts as integrated quality-of-life issues that will attract green-oriented businesses and residents downtown. Sarno’s long-term vision is closely tied to saving money and reducing pollution from energy consumption.

Palm Desert officials quickly recognized that meeting their goal required support beyond their capabilities. Residents and businesses have taken action, southern California utilities funded grants, and the state assembly and governor approved the bill allowing local governments to float bonds to loan money to the private sector for energy conservation. Next, seeking even lower interest rates on energy conservation loans, Palm Desert leaders and their U.S. congressional representative, Mary Bono Mack, have set their sights on the IRS tax code. “Cities historically have sold tax-free municipal bonds to fund public works, but the IRS has ruled that because our loan program involves improvements to private property, they have to be taxable municipal bonds,” Conlon says. “The market for them is very small, whereas there’s a big market for tax-free municipal bonds, which are 2 to 3 percent cheaper.”

If Palm Desert’s latest push is successful, “It would help cities throughout America, and also would help the loan applicants, because cities could pass on the savings to them,” Conlon says.

And, in Albuquerque, the mayor’s task force is plotting a comprehensive climate action plan. “When we’re done, we will have established clear reduction targets and a plan for us to achieve those targets,” Soladay explains, emphasizing that continued support from top leadership “is the driving force that makes things happen.”

John W. DeWitt is a marketing consultant and business writer based in New Salem, Mass.