Dressing up downtown and other high-visibility areas between Thanksgiving and New Year's with festive lights and decorations is a tradition in many communities, 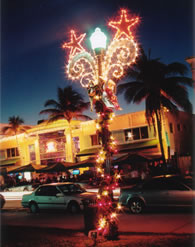 Dressing up downtown and other high-visibility areas between Thanksgiving and New Year’s with festive lights and decorations is a tradition in many communities, but a tough economy is forcing some cities to cut back on the trimmings. For some, the decision is a balancing act. While clearly not as important as maintaining roads and providing city services, twinkling lights help create a commercial draw, particularly for destination cities. However, maintenance and power costs have some city leaders re-evaluating exactly what role decorating should play this holiday season.

Miami Beach, Fla., has spent more than $1 million over the past three years paying for a lease-to-own contract for holiday decorations to light up every street in town. But, in September city officials cut the budget for installing and maintaining the decorations from $215,000 to $125,000, leaving many decorations in storage. “This is a tourist town. We need to have a lot of lights,” says Mayor Matti Bower, who was displeased with the city commission’s decision.

Bower would have preferred to take money out of the city’s contingency fund or to request funding assistance from the Visitors & Convention Authority. “Whenever times are tough, government should try to do a little more to uplift spirits,” she says. “In the end, I think the city will find a little more money [for decorating]. People will expect it.”

But, many residents who are cutting their own budgets expect the city to do the same, says Carson Chandler, press secretary for Orlando, Fla., a popular holiday destination city. With a budget deficit of $30 million going into the 2008-2009 fiscal year, Orlando officials elected in July to cut spending. The city adjusted the mil rate to cover half of the deficit and instituted a hiring freeze, eliminated vacant positions, closed parks, reduced landscape maintenance, and reduced the budget for holiday decorating from $300,000 to $150,000. “We also had to eliminate holiday bonuses,” Chandler says, which amounts to a $100 check to each city employee. “But we made sure that we got the message out early and assured employees that they would still get a 3 percent cost-of-living increase,” he says.

Chandler points out that $150,000 savings on holiday decorations is not a lot of money out of the overall budget, and he does not rule out community groups and neighborhood associations possibly stepping up to fill the holiday decorating gap. “The residents might notice [the difference], but tourists will still see a very nice downtown area,” he says.

Grand Forks, N.D., officials are focusing on fewer displays that pack a bigger punch and use energy-efficient lighting, says Director of Urban Development Greg Hoover. Displays at targeted points in the city will have a white-light snowflake theme that is both seasonal and secular. The $205,000 funding for the plan will come from sales taxes slated for beautification projects as part of economic development. “North Dakotans are pretty frugal, so it was important to everyone to hold down costs,” Hoover says.