Elections specialists pack up bags in a room filled with counted ballots the day after the election at the Mecklenburg County Board of Elections office on Nov. 4, 2020 in Charlotte, N.C. (Photo by Michael Ciaglo/Getty Images) 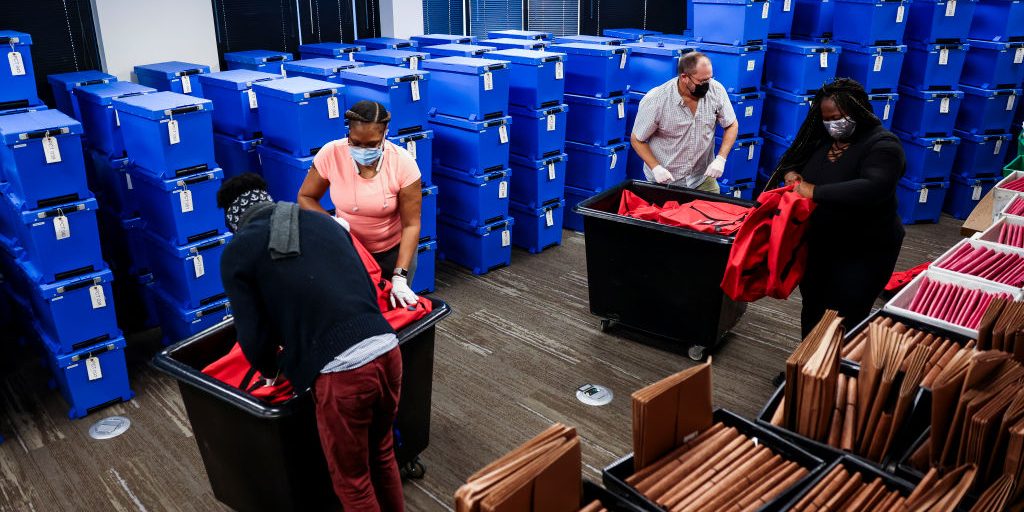 Every year, American City & County selects an outstanding public servant to honor as a recipient of our annual Exemplary Public Servant of the Year award. In the past, this award has been given to leaders who showed courage in the face of adversity, who made tough decisions to better their communities, or whose innovative solutions averted disasters.

However, this year, we’re doing something a little different.

Instead of profiling one specific leader, this year’s Exemplary Public Servant of the Year award is going to the country’s county clerks and election officials for their work in preserving American democracy during what was one of the most challenging elections in our nation’s history.

Not only was there a global pandemic to contend with, but trust in our election processes were severely eroded. Poll workers and officials were required to make critical last-minute decisions on how to best hold an election during the worst health crisis this country has seen in over a century, all the while being demeaned and undermined from all angles.

It’s for this fortitude, perseverance and sacrifice that American City & County has made the decision to honor and uplift these individuals. You quite literally pulled democracy back from the precipice, and for that we all owe you a debt of gratitude.

Ricky Hatch, the clerk and auditor for Weber County, Utah, says that every year, year after year, election officials work tirelessly to ensure American democratic processes are perceived, but this year was entirely different.

“We face enormous pressure from multiple sources, but the biggest pressure is what we put on ourselves to do things right,” Hatch says. “In 2020, people questioned our competency, our intelligence, our morals, and sometimes our parentage. We faced unsubstantiated allegations, protests and threats of violence. My car was vandalized twice. We worked 18-hour days for weeks and months.”

Indeed, many election officials faced intimidation and even death threats for their role in this past election. Weeks after the election, armed protesters citing unsubstantiated claims of election fraud crowded around Jocelyn Benson – Michigan’s top election official’s – home, threatening her and her family, Reuters reports.

“Through threats of violence, intimidation and bullying, the armed people outside my home and their political allies seek to undermine and silence the will and voices of every voter in this state,” Benson said in a statement.

The pandemic was also a major threat officials had to contend with. Hatch says the health crisis upended traditional election processes and had officials rethinking the traditional mechanisms by which elections usually proceed. For one, mail-in voting increased significantly. “In 2016, 21 percent of all ballots were returned by mail or drop box,” he says. “In 2020, that percentage more than doubled to 46 percent. In Utah, almost 99 percent of all voters returned their ballots by mail or drop box in November 2020.” These changes meant election officials had to pivot significantly in the way votes were tabulated and processed.

The global health crisis also caused major changes to in-person voting, as well. “We had to figure out how to reduce the risk of COVID exposure for voters and workers without increasing barriers for voters, without breaking election laws, without disenfranchising voters, and without creating long lines,” Hatch says. “It was a tall order, but election officials are resilient, resourceful, and doggedly persistent.”

This year was also unprecedented, Hatch says, in the doubt raised about the integrity of the election by some of the nation’s highest-ranking lawmakers, including then-President Donald Trump.

“It’s always frustrating when people who don’t understand the intricacies of election administration make sweeping allegations of nefarious activity by election officials,” Hatch says. “I’ve met about 20 percent of the 9,000 election officials across this country, and our overwhelming desire is to have the candidates be on the front page of the paper, not us. We don’t have a dog in this political fight – we’re the referees.”

Still, Hatch’s frustration was palpable. “So many times, when someone declares that they have ‘undeniable proof’ of election fraud, and we research their allegation, the facts refute the proof,” Hatch adds. “But by that point, the story has been posted, tweeted, and headlined without substantiated evidence. Elections in the U.S. are significantly more secure, efficient, accessible, and transparent than ever before.  It’s frustrating that so many in the public don’t recognize that.”

Despite the frustration, the trouble with the pandemic and the often-unsubstantiated claims of fraud in the media and on the lips of our leaders, officials followed through with 2020’s election, marking an unprecedented yet significant contribution to the continued traditions of American democracy. The tremendous sacrifices, stress and sleepless nights, Hatch says, were worth preserving our nation’s most precious institution.

“It’s funny, sometimes people will say, “What do you do the other 364 days of the year?”  My reply is, “Doing 730 days’ worth of work, so this one day goes well,”” Hatch says. “Hardly anyone says, ‘when I grow up, I want to administer elections!’ We’ve all followed unique paths and fallen into this profession, which we love so dearly. It gets in your blood and becomes your passion. It’s tremendously rewarding, knowing you’re facilitating the foundation of this country.”