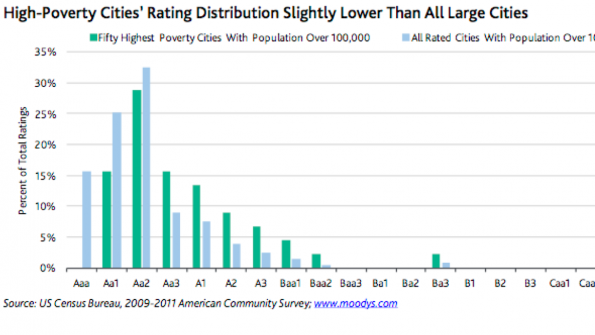 According to Moody's, high levels of urban poverty are not necessarily related to a city’s credit ranking.

High rates of poverty do not necessarily translate to low credit ratings in cities with populations of 100,000 or more.

According to a Moody’s report, high poverty rates will not preclude large U.S. cities from having strong credit qualities and attaining a credit rating in the upper investment grades. The credit rating agency’s research found 27 of the 50 poorest large cities are ranked Aa3 or higher.

“Cities can overcome the many adverse effects of high poverty with a large and diverse tax base, healthy financial position, strong governance and manageable fixed costs,” Moody’s Associate Analyst Heather Guss said in a statement. “We expect large municipalities with these characteristics to meet the challenges of a high poverty rate and continue to sustain robust credit profiles.”

The reason high poverty rates don’t hamstring municipal credit ratings in big cities are myriad, but Moody’s says the main reason is large cities often play a central role in the economy of their region, leading to strong tax bases arising from pulic and private institutions and well as commuters who bring in revenue.

One example would be Cincinnati. With a poverty rate of 29.4 percent, the city still bosts an Aa2 credit rating due to the large numbers of corporate headquarters, healthcare organizations and higher-education institutions, according to the report.

Another example is Provo, Utah. Despite a poverty rate of 32.5 percent, the city maintains an Aa1 credit rating due largely to Brigham Young University. Dayton, Ohio has a 33.8 percent poverty rate and an Aa2 stable ranking due to the financial influence of Wright Patterson Air Force Base.

The complete list of the 27 cities and their credit ratings are: