Speedy ATV doubles as a personal watercraft (with related video)

Gibbs Sports Amphibians is selling the Quadski, a one-person all-terrain vehicle that doubles as a personal watercraft. 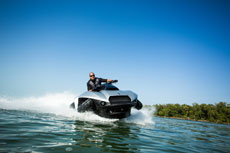 Attention James Bond wannabes: the Quadski, a one-person all-terrain vehicle that doubles as a personal watercraft, goes on sale in the U.S. next month for around $40,000. It’s powered by a four-cylinder, 175-horsepower BMW K-1300 engine, and can reach speeds of 45 mph on both land and water. According to the manufacturer, Auburn Hills, Mich.-based Gibbs Sports Amphibians, no other amphibious vehicle available to the public can go faster than 10 mph on the water.

With the aid of High Speed Amphibian (HSA) technology, the Quadski will be able to switch from land to water use, and vice versa, in a matter of seconds. At the press of a button, the Quadski’s wheels retract when entering the water and deploy when approaching land. The company has worked for the past 18 months and devoted more than 75,000 engineering man-hours to pair the BMW engine with Gibbs’ patented amphibious system.

Gibbs Sports Amphibians has acquired a 54,000-square-foot plant in Auburn Hills, Mich. to support production of the Quadski. The company plans to hire as many as 200 at its Auburn Hills plant to support the project. The initial production run is 1,000 vehicles, with full production starting sometime in 2013. At maximum capacity, Gibbs expects to produce twenty Quadskis per day.

Gibbs Sports Amphibians Inc. has pioneered HSA technology to create a sports amphibian that operates at high speeds on both land and water. The privately held business was founded by Alan Gibbs and Neil Jenkins It consists of two divisions — Gibbs Sports Amphibians Inc. which designs and manufactures consumer sports amphibians including Quadski — and Gibbs Amphitrucks Inc., which builds commercial amphibians for first responder and military applications.

The company is working on seven other product lines, including the off-road Hummer-like vehicle the Humdinga, and the large, military-style amphibious transport vehicle the Phibian. Jenkins and his team were in Washington, D.C., last month shopping the two vehicles around but have not inked any government contracts yet.

Watch a video of the Quadski on land and water.