In its "2012 Dodge Construction Outlook," McGraw-Hill Construction estimates that the value of public works construction projects under way will drop 5 percent from 2011 levels, settling at $94.8 billion.

Construction of schools, healthcare facilities, and other government and institutional buildings will slow a little in 2012, according to MHC. The value of government and institutional building projects under way in 2012 will fall by 2 percent compared to 2011 levels, totaling $92.1 billion in 2012. Healthcare is the one bright spot in this category; spending on healthcare construction will grow by 2 percent in 2012 over 2011 levels, with the value of construction reaching almost $22.9 billion, MHC predicts.

In 2012, public buildings construction projects will cover 22 million square feet, down 9 percent from 2011 levels, according to MHC preliminary estimates. Military housing, courthouses and detention facilities are some of the government projects covered in this category.

In its 2012 forecast, the American Road & Transportation Builders Association (ARTBA) predicts that the highway and bridge construction market is expected to contract 6 percent, to $72.6 billion, from an estimated $77 billion in 2011.

“The main factors driving the decline in highway and bridge construction are not surprising: the winding down of infrastructure investment under the American Recovery and Reinvestment Act (ARRA), continued weak growth in the U.S. economy, persistent state and local budget challenges, and a static federal-aid highway program,” says Alison Premo Black, ARTBA’s vice president of policy and managing director of its Research & Education Division.

“Of course, the long-delayed highway/transit reauthorization bill remains a ‘wild card,'” she adds. “If Congress in early 2012 passes a multi-year bill that, at minimum, maintains current investment levels, it could help interject greater certainty in the market.”

Now is the time that the U.S. should be investing in its public infrastructure, says Bernard Markstein, chief economist at Norcross, Ga.-based Reed Construction Data, an information provider to the construction industry. “We have a lot of skilled construction workers who are out of work and available, so wages are relatively low or as low as they are going to be. In addition, building materials are relatively inexpensive, interest rates are low, and at this point, we have a great need. This is an investment that will last for years — it’s not short term,” Markstein told Govpro.

Once the economy has improved, construction-related prices will go up, Markstein says. “So, it’s a great time to be borrowing money and putting folks to work, whether repairing or [building] new infrastructure. But politically, it seems a lot of people treat any government spending as a negative instead of looking at it as an investment,” he says. 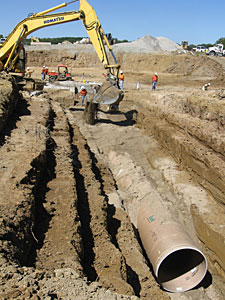 Where possible, agencies are taking advantage of low construction costs and moving forward on projects to improve infrastructure. The Springfield, Ill., Metro Sanitary District (SMSD) has embarked on a four-phase $125 million upgrade and expansion. The district serves an estimated 150,000 residents, and the expansion is designed to meet regulatory requirements and future demand.

Phase four of the project, which includes upgrades to the district’s Spring Creek Wastewater Treatment Plant, was bid in April 2011 and is currently under construction. The $32.7 million phase will be completed in May 2014. By using intermediate piping with stainless steel closure couplings, crews could build concrete structures, such as clarifiers, independently of each other.

The Nevada Department of Transportation (NDOT) and Nevada Department of Wildlife (NDOW) collaborated on a project to reduce vehicle-deer collision rates by building an overpass structure on a section of US 93 in Wells, Nev. The road section in northeastern Nevada crosses through a seasonal mule deer migration route.

To direct wildlife out of the path of oncoming vehicles, NDOT installed a 66-by-23-foot BEBO precast concrete arch system from West Chester, Ohio-based CONTECH Construction Products. The system included precast headwalls and wingwalls, which retain the soil around the arch. 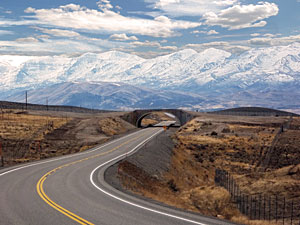 The structure, 162 feet in length, was designed to allow vehicles to pass through while providing a semi-natural corridor above for wildlife. Three miles of fencing surround the area and encourage wildlife to use the overpass instead of crossing the road. In addition, the top of the structure was covered with earth and native vegetation to replicate the natural environment.

The project was a partnership between NDOT, NDOW and local groups. NDOT oversaw construction of the overpass structure, while NDOW provided fencing and the vegetation to cover the crossing. Several community groups provided project support.

The approximately $2 million project was funded in part by federal economic recovery funds. The photo shows the arch system.

At the beginning of 2012, government administrators have high hopes that the U.S. economy will turn the corner toward a solid recovery. In the meantime, they are exploring new revenue sources, expanding partnerships with the private sector, trimming budgets, and taking other steps to keep expenses in line with fiscal realities.

View additional installments of our 2012 forecast as well as the 2011 Mid-Year forecast.