It soothes the savage breast 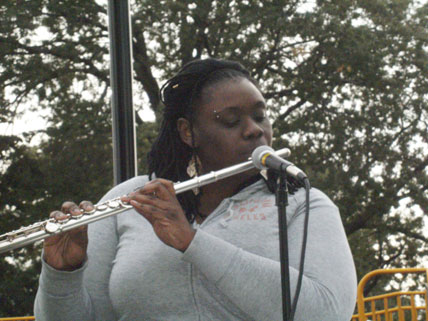 Jennifer Stone-Barton, the South Ward liaison for Newark, N.J., Mayor Cory Booker, took this photo of Newark resident and Arts High School graduate Jessica King performing a flute solo during the city’s “Music Saves” live concert, held Sept. 16. The city’s Division of Constituent Affairs, Police Department, Newark Youth One-Stop job placement program and Newark Now, a collaboration of grassroots programs, hosted the event, which featured live jazz, spoken word, and performances by local rap artists. The goal of the event was “to use music as a vehicle to heal the community” and offer “a positive and fun-filled activity at the start of the weekend,” according to the city’s press office.