For federal workers and anyone interested in federal government activities, FedSmith.com is a useful interactive information portal. Govpro.com caught up with Ralph and Ian to learn more about FedSmith’s role in the federal workplace. 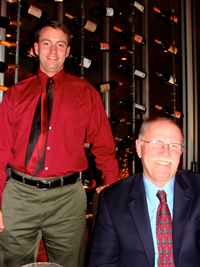 For federal workers and anyone interested in federal government activities, Florida-based FedSmith.com is a useful interactive information portal. The site provides links to daily news headlines, original articles, federal retirement information, including federal Thrift Savings Plan rates, as well as quick links to pages of interest to the federal community. Traffic to the site has been steadily increasing. The site gets about 2 million page-views and a half-million visitors every month.

FedSmith.com is a family-owned organization. Ralph Smith, one of the site’s founders, has federal professional job experience that he uses in writing and editing content for FedSmith.com. Ian Smith, Ralph’s son, is responsible for the site’s design and programming. Another founder is Susan McGuire Smith, who had a 25-year career with the government in contracts, ethics and personnel law.

Govpro.com caught up with Ralph and Ian to learn more about FedSmith’s role in the federal market and workplace.

Ralph Smith: Well, the fed work force is already pretty highly organized, much more so than the private sector. I used to be an agent with the Federal Labor Relations Authority and a labor relations officer with the National Aeronautics and Space Administration and a labor relations instructor with the federal Office of Personnel Management, and people are always surprised at the extent of the current union organization among the federal work force already. I don’t think there’s going to be a lot more organizing going on, but I suspect the climate in Washington will probably help the unions in getting new members. Unions are obviously going to be seen as a way of defending the current pay and benefits structure that workers now have.

Govpro: Do you see increased militancy in the federal work force with all the discussion now about government worker pay and benefits and their impact on the government’s budget?

Ian Smith: We have definitely seen more frustration lately — certainly with respect to that issue. If you look at the comments that we get on FedSmith and in our surveys and articles, people are very frustrated about that, and it shows. Would I say there’s more frustration or more militancy than before? Yes, there seems to be, because of that issue. The way people phrase it on our site, and the overall theme and the comments, is, “We feel like we are targets for the problems that are going on in Congress and the government today,” and so federal workers are frustrated with that.

Part 2 of this interview will appear soon on Govpro.com.

Bruce Fenton’s views that federal salaries, in general, are far higher than pay for comparable civilian workers, drew a lot of comments at Govpro.com.