Government efficiency, sustainability and infrastructure were among the major topics addressed in 31 "State of the City" speeches analyzed by the National League of Cities. 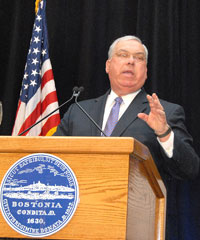 Government efficiency, sustainability and infrastructure were among the major topics addressed in 31 “State of the City” speeches analyzed by the Washington-based National League of Cities (NLC). NLC will discuss the analysis on six common themes found throughout the addresses on its CitiesSpeak blog.

The analysis included speeches from mayors of large cities, including Boston Mayor Thomas Menino (pictured) and New York Mayor Michael Bloomberg, as well as the mayors of smaller cities, such as Helena, Mont., and Greenville, Miss. In the addresses, mayors reaffirmed city priorities, lauded strategies for growth, made promises for progress and outlined broader future goals.

The six themes NLC’s Center for Research and Innovation found include:

• Economic development — Improving relationships with the business community and focusing on workforce and job training to jump-start the economy;

• Regionalism — Working with nearby municipalities to create regional solutions and stronger communities; and