Illinois has passed legislation intended to further stabilize the state's pension systems for law enforcement officers and firefighters while protecting their retirement benefits, according to Gov. Pat Quinn's office. 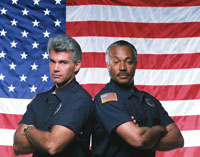 The new law, signed on Dec. 30, makes changes to pension requirements for individuals hired on or after Jan. 1, 2011, according to Quinn’s office. The law establishes a normal retirement age of 55 with 10 or more years of service and an early retirement age of 50 with 10 or more years of service, with a 0.5 percent reduction for each month the pensioner’s age is under 55. It sets a maximum pension of 75 percent of an individual’s average salary, caps pensionable salary maximum at $106,800, with annual increases as outlined in the law, and allows for monthly cost-of-living adjustments of either 3 percent or one-half of the urban consumer price index, whichever is less, beginning at age 60 for retirees and survivors.

The changes made under the new law are meant to ease the burden the state’s cities and counties face in maintaining their pension systems. “Firefighters and police officers put their lives on the line each and every day to keep us safe,” Quinn said in a statement. “These men and women who serve so selflessly must continue to have access to quality pension benefits that are also affordable for municipalities throughout the state.”