T.F. Green, a state-owned airport located in Warwick, R.I., operated by the Rhode Island Airport Corp., recently conducted an energy audit with White Plains, N.Y.-based ConEdison Solutions to determine how much energy the facility consumes and how it could reduce that amount. The airport serves 4.5 million passengers annually and 200 daily operations.

One area marked for improvement was the airport’s arrival roadway. It had 150 wall-mounted, 75-watt metal halide fixtures that directed light straight across, providing little light on the roadway for drivers. Airport officials decided to test light-emitting diode (LED) luminaires from Sturtevant, Wis.-based BetaLED on the roadway instead. Fifty-eight LED luminaires were installed by Cranston, R.I.-based RISE Engineering with funding support through rebate subsidies from Westborough, Mass.-based National Grid, the local utility and ConEdison financial incentives.

The new fixtures have dramatically greater output than the previous lights and produce a brighter, whiter light for the roadway. They also have reduced energy consumption by more than 50 percent. The Airport Corp. is continuing to evaluate the fixtures’ lifespan and maintenance to determine if additional LED luminaires will be installed in exterior areas, such as the airport parking lots.

San Clemente, Calif., recently completed improvements to the parking lot of its popular Metro Link train station, known as the Beach Express because it is located 100 yards from the Pacific Ocean. The project included upgrades to the lights, which produced a large amount of glare, obstructed ocean views and were costly to maintain because the harsh coastal environment wreaked havoc on the cast aluminum poles and fixtures.

The city contracted with locally based South Coast Lighting & Design to recommend new lights. The consultant suggested decorative concrete poles along with dark skies-rated luminaires by King Luminaire Co. The products are manufactured from copper-free aluminum with stainless steel hardware and components, and they are finished with salt-spray rated, marine grade paint to withstand harsh environments,

The new lights eliminated the glare and increased the light levels and uniformity throughout the parking lot. They also use 25 percent less energy than the lot’s previous lights, and the poles and fixtures are recyclable.

With help from the city and a grant from the Indiana Department of Transportation, Anderson University in downtown Anderson, Ind., recently installed a new lighting system designed to outlast its previous traditional high-pressure sodium luminaires and reduce energy consumption by 40 percent. Home to 2,800 students, the campus now is illuminated with GranVille LED luminaires from Granville, Ohio-based Holophane. The new lights have a life expectancy of more than 50,000 hours compared to 24,000 hours for its previous luminaires. After 50,000 hours, output from the LED fixtures is reduced by 30 percent, while the high-pressure sodium fixtures must be replaced.

The project, which includes 42 fixtures that produce 1.6 footcandles, will reduce carbon emissions by 17,106 pounds annually, according to Tom Donoho, transmission and distribution supervisor for Anderson Municipal Light & Power. The city will save approximately $2,200 yearly in energy and maintenance. “We have received many great comments about the lighting,” Donoho says. “It has made a big difference in the campus appearance.” 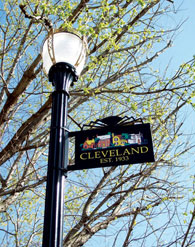 In 2008, members of the Cleveland Neighborhood Association in Oklahoma City decided to improve aesthetics and security in their area. Working through the local non-profit organization Neighborhood Alliance, the residents secured funding for decorative lighting, poles, bases and banner brackets. They called Edmond, Okla.-based Pelco Products to order the new fixtures, as well as matching benches and trash cans. The company’s sales staff arranged for the local power company OGE to install and maintain the lighting.

Now, the neighborhood residents enjoy safer streets and better accessibility at night. Plus, they can display their neighborhood banners from their new decorative brackets.

The Abington Community Library in Clarks Summit, Pa., is retrofitting its fluorescent lights with new technology to cut energy use and increase the amount of light in the library. The technology, Miro Aluminum by Germany-based Alanod, is a reflective material that lighting manufacturers build inside their fixtures to direct nearly all the light. The library can use lower wattage fluorescent bulbs because the fixture is more efficient.

Library Director Leah Ducato Rudolph says the library board had considered reconfiguring the light fixtures from scratch, but decided that was too costly. The library experimented by installing the material in one section and found that it “brightened the area up immensely,” Rudolph says.

This year, the library is required to cut 15 percent from its overall budget. It is using a $10,000 grant from the Pennsylvania Department of Environmental Protection to pay for the installation of the reflective material, and library officials expect to save 25 percent off the facility’s electric lighting bill.