Grand Plans for the Great Park

The largest metropolitan park developed in the last 100 years is taking shape in southern California. 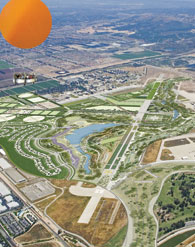 For four years, Irvine, Calif. has had the opportunity to turn a decommissioned military base into a park. The decision to plan and redevelop more than two square miles of a 4,700-acre base for metropolitan park purposes turned out to be a defining moment for the city, as well a huge and ongoing challenge.

Recently, Irvine and the Great Park Corp. Board approved initial funding for the park’s first major development phase: 500 acres comprising its western sphere. The first-phase development is estimated to cost $61.16 million and is slated to begin construction this year.

Located in central Orange County within Irvine’s eastern boundary, the 57-year-old El Toro Marine Corps Air Station, once a home to generations of Marine Corps aviators since 1942, was closed in 1999 as part of the Defense Department’s Base Closure and Realignment process. The prospect of a large parcel of land becoming available in the center of one of America’s fastest-growing urban areas quickly turned into a political and philosophical battle over how the land was to be reused.

Business interests and the Orange County Board of Supervisors supported the creation of an international airport. Irvine and fellow south county cities, community leaders and businesses envisioned a vast metropolitan park and a contiguous community with residential and commercial uses.

In Irvine, a planned community with a population of more than 200,000, the prospect of a commercial airport with flights every few minutes presented objectionable lifestyle, health and environmental issues for city officials and residents. So, the city spent tens of millions of dollars to defeat the airport and create, instead, the Great Park plan.

Following a vigorous public debate, on March 5, 2002, 58 percent of Orange County voters decided in favor of the Great Park when they passed Measure W, which prevented the county from ever building a commercial airport on the military base and instead zoned the land for park uses. The next day, the Department of the Navy announced that El Toro would be sold at an online, public auction.

Irvine and Navy officials created a plan for the base, and in 2005 — three years after approval of Measure W — 3,700 acres of the air station were auctioned off. Nearly 1,000 acres of the 4,700-acre base remain under federal control as permanently protected wilderness area. Lennar Corp., the managing partner of a consortium of investors, operating as Heritage Fields LLC, offered the winning bid of $649.5 million. As part of Heritage Fields’ agreement with Irvine to build a residential and commercial community on the base land adjacent to the city’s Great Park site, on July 12, 2005, Lennar deeded a 1,347-acre parcel to Irvine, worth hundreds of millions of dollars, at no cost to the city.

To establish a structure that would advance the $1.4 billion vision for the park, the base was split into two major components: the Great Park, which will be the focal point of the base’s redevelopment, and the Great Park Neighborhoods, the residential and commercial community to be developed by Heritage Fields. The Department of the Navy is overseeing overall mitigation of environmental impacts from past military operations.

To manage the Great Park, the Irvine City Council established the Orange County Great Park Corp., a 501(c)(3) non-profit organization. Governed by a nine-member board (five council members and four public members), the corporation is responsible for the park’s design, construction and maintenance.

The corporation’s financial plan sets the structure of the funding mechanism for the design, landscaping and development costs of the Great Park. Funding for the Great Park’s initial development phase is coming from a dedicated redevelopment district and the use of development agreement fees totaling $200 million paid by Heritage Fields. No new taxes will be required to build the park. Based on the current development agreement, Heritage Fields also will cooperate in the creation of a Community Facilities District to raise an additional $201 million for future infrastructure funding.

The value of the city-owned parkland ($249 million), plus development agreement fees already paid ($200 million), and additional future joint backbone infrastructure funding ($201 million) totals $650 million. Beyond that, under California redevelopment law, over the coming decades the city will receive hundreds of millions of dollars in tax increment funding as new property is built and the owners pay property tax.

Current economic and housing market conditions have slowed the residential and commercial development but have not fundamentally affected planning and development of the Great Park. With funds from the initial $200 million payment from Heritage Fields, the Great Park Corp. has sufficient capital to continue operations at the same pace.

From the beginning, the Great Park’s planning was guided by the city working with the Great Park Corp. and a team of designers to create a park that will be a pioneering example of 21st century planning, design, development, sustainability, and social and cultural advancement. The Great Park will include extensive natural habitat and preservation areas in addition to recreation, education, entertainment and cultural uses that will be unlike any other metropolitan park in America.

Designing a park almost twice the size of New York’s Central Park has presented a multitude of challenges to the team, not the least of which has been the flatness of the vast site. “Transforming the sterile expanse of a former Marine airbase into a living landscape is fundamental to the vision of the Great Park,” Smith says. “The biggest challenge we faced was bringing life back to the place, creating wetlands and lakes, and re-establishing the site’s habitat of flora and fauna.”

Complementing the design team, local stakeholders — including residents, community leaders and officials, veterans, environmental organizations and artists — have taken a deep interest in the park and its planning. “As with few other public works projects, the citizens of Orange County have been and will continue to be key participants in imagining a spectrum of new ideas and concepts to create a healthier and more sustainable park,” says Beth Krom, city council member and member of the Great Park Corp. Board.

The first 500-acre phase includes at least eight tournament-level soccer fields in the 165-acre Sports Park; the completion of a 27.5-acre Preview Park surrounding the Great Park Balloon, which takes visitors 400 feet up for a bird’s-eye view; event lawns and picnic meadows; a cultural terrace site including a performance bowl; and 7.3 miles of walking and bicycle paths. A 125-acre working farm is planned to include row crops, a tree nursery and 5,000 donated Valencia Olinda citrus trees. The development also will require demolition of miles of concrete runways that could be made into recycled “El Toro Stones” to build perimeter walls for aesthetic and practical uses.

Eventually, the Orange County Great Park also will connect riding, hiking and multi-use trails from all parts of the county and complete an existing bicycle network. Ecologically, the park is a link in a chain of land reserves stretching from the Santa Ana Mountains to the Pacific Ocean, and it connects ecologic systems and water reserves in central and south Orange County.

The park also will pay homage to the base’s military legacy. Hangar 244, a World War II aircraft hanger that was later used as a Marine Corps museum, will be preserved and used again. Nearby, another structure will be constructed to house a military and heritage museum dealing with issues of military history, war and peace.

The Great Park plan also includes a 2.5-mile-long canyon. About 70 feet wide at its narrowest point, it will expand at its southern end to accommodate a terrace and amphitheater and a 20-acre lake. Several bridges will span the canyon, including the conservatory bridge to a botanical garden, and the Bridge of Seven Turns that zigzags across the upper canyon Much of the material used to build the bridges will come from the air base, such as recycled concrete runways.

As it evolves, the Great Park will be an active showplace of sustainability, demonstrating new ideas, structures, systems and technologies. To help reach sustainability goals, a set of indicators will be tracked by a series of performance standards. Sustainability will be measured in five major categories:

Strategies to achieve those goals include renewable energy generation, implementation of energy-efficient technologies, public education and demand reduction in the park’s various structures and operations. The Great Park also will create systems that reduce the demand for fossil fuel for site, building and transportation uses.

Because the park is centrally located, it will be accessible easily to Orange County residents. Also, it will be the only metropolitan park with a major rail line stopping at its border. The rail link south to San Diego and north to Los Angeles and the rest of California is served by Amtrak and the regional Metrolink service.

According to a study by Los Angeles-based Economic Research Associates, construction and other activities involved in building the Great Park and adjacent residential/commercial developments could add tens of thousands of new jobs and billions of dollars to Southern California’s economy over the next 12 years. Specifically, approximately $23.9 billion will be added to Southern California’s gross regional product by 2020. The study also projects that 31,500 new jobs could be created by the Great Park and adjacent private and public development. That number, of course, requires that private development gets under way.

“We knew when we started planning the Great Park three years ago that it would bring a significant number of new jobs and economic vitality to Orange County and Southern California,” says Mike Ellzey, CEO of the Great Park Corp. “If the Great Park has this potential level of economic benefit for Southern California, other parts of the nation may also benefit economically from their own park development. When looking for public works projects with long-term benefits, I think this potential must be considered seriously by the federal and state governments.”

Because of the importance of the Great Park to Orange County and Southern California, Irvine is seeking economic stimulus funding, particularly in the areas of energy, water and transportation. Just as the Great Depression’s public works projects helped build famous parks such as Balboa Park in San Diego and Golden Gate Park in San Francisco, the Orange County Great Park is now a candidate for federal stimulus funding to accelerate development of America’s first great metropolitan park of the 21st century.

Larry Agran is chair of the Orange County, Calif., Great Park Corp. Board of Directors and the Irvine, Calif., Mayor Pro Tem.