Race for the cure 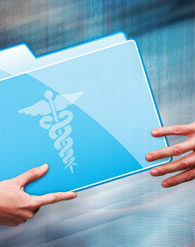 For most of this decade, the Hennepin County, Minn., Medical Center has been working on a $65 million project to convert its medical records from old-fashioned papers and file folders to a state-of-the-art electronic health record system that can be accessed at Internet speed. But, much more work remains, and with the American Recovery and Reinvestment Act (ARRA) devoting $19 billion to upgrade the entire country’s medical system to electronic health records (EHR), Hennepin County stands at the head of the pack to claim a chunk of it. As a matter of public policy, the Obama administration argues that conversion to EHR will save money, reduce medical errors and greatly enhance the efficiency of the bloated medical system.

“We’re excited to really get this thing rolling,” says Joanne Sunquist, the chief information officer for the Hennepin County Medical Center and a leader among health technology professionals in managing health information. “I don’t know of anything else that will get organizations moving as fast.”

For most of the public sector medical community, the federal funding for electronic medical records is the first opportunity to make rapid progress in an area where it has lagged behind even the sluggish performance of the private sector. The bill provides financial incentives to assist and reward medical providers to toss out their paper files in favor of electronic records by fiscal year 2016. In addition, it penalizes providers that do not convert to electronic records by reducing their reimbursements for Medicare and Medicaid.

The carrot-and-stick approach has brought a sense of urgency to a field that has languished, either for lack of dollars or initiative. Now, the public sector medical community — including medical care facilities and practitioners — is moving quickly to catch up. “There is a frenzy going on,” Sunquist says, referring to the medical community’s scramble to meet the deadlines.

Yet, as with most federal funding, the devil is in the details. With only the broad outlines of the program included in the legislation, experts in the field are sorting out how it will all work. Moreover, many public facilities are in varying states of readiness to make the conversion and are trying to determine the best way to manage the task and qualify for the federal subsidies. The legislation requires the U.S. Department of Health and Human Services to provide the regulations that will guide funding proposals.

In promoting EHR, the Obama administration continues a federal policy that has been in place since 2004 and some believe is critical to reforming the medical system. The annual Patient Safety in Hospital Study from Golden, Colo.-based HealthGrades has found that medical errors, including those attributed to the lack of using electronic records, lead to an estimated 100,000 deaths each year and cost the nation more than $1 billion in avoidable hospital bills and nearly 41 million workdays, resulting in the loss of $11.5 billion for American businesses.

“Frequent error, miscommunication and wasted resources from duplicate tests, delays and conflicting information are common problems in the health systems,” says Karen Davis, president of the New York-based Commonwealth Fund in a statement. “[The findings] make a compelling case for implementing interventions that we know will make a difference, including electronic medical records and computerized systems for physical ordering of prescription drugs.”

While some communities have begun the conversion to an electronic recordkeeping system, they are the minority. Sunquist estimates that one-third of hospitals have installed some form of EHR, one-third have made some progress in developing a new system and a final one-third have made little or no progress. She is concerned, in particular, that the last tier will have difficulty meeting the deadline.

When the U.S. set out the 2004 policy to convert medical records to electronic systems, medical facilities began making good progress toward adoption, but they have reached a plateau, Moore says. She believes that is a result of few incentives to push communities to spend the money when the return on investment occurs over a long period of time.

Some critics doubt the cost-savings potential of electronic health records, but Moore sees those arguments as similar to those that have been made for other information technology initiatives. “It sounds very familiar,” she says. “There is a learning curve, but it will make the system more efficient.”

With the Obama administration initiative, the cost-benefit analysis has been set aside, at least for the moment, while experts sort out details, such as standards for exchanging information, what improvements qualify for payments and which facilities are eligible. Still, there are concerns in other areas. The nation’s counties want to know if health facilities in correctional institutions can take advantage of the incentive payments, says Paul Beddoe, associate legislative director at the National Association of Counties (NACo). Counties are largely responsible for local correctional facilities and must provide emergency medical care, even for short stays within the system.

Because prisoners are not eligible for Medicaid payments while they are in custody, NACo is concerned that those health facilities will not be included in the incentives and will not be able to convert to EHR. “There are inmates who are homeless who have mental illness with conditions requiring medication, and if their case is dismissed, they are back on the street, cycling through the system. If we could include them [in the medical records improvements], the savings in the end would be huge,” he says.

PLAN FOR THE FUNDING

With so much uncertainty, officials are focused on how to undertake such an extensive project, especially those communities that are somewhat behind in their system’s development. Carlos Ramos, California’s former assistant secretary of Health and Human Services for information technology and currently a director for Fort Lauderdale, Fla.-based Citrix, recommends a process that will lead to a successful initiative:

Clearly, the complexity of the EHR enterprise requires a great deal of work before the system is up and running nationally. Despite the many intricacies of the project, all of the experts agree on the fundamental soundness of the initiative.

Especially for those involved in information technology, the duplication of services, unidentified conflicts between multiple treatments and just plain human error point to the overwhelming need to reform how patient information is handled. Now with the ARRA initiative, the financial incentives are finally in place to bring about change that professionals have been advocating for years. “It will drive costs down and create efficiencies,” Ramos says. “It will create the development of new system technologies on an ongoing basis. It’s the mechanism to drive this badly needed change.”