Wireless communication moves into all areas of public service. 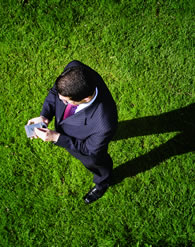 It is perfectly understandable if many city and county officials have a love-hate relationship with wireless technologies. Some are still recovering from well-intentioned but misguided public Wi-Fi strategies, or the fairly sudden retirement of public cellular data networks often used by municipal police forces earlier in this decade. They could be frustrated over the difficulty of building a dedicated emergency responder network or struggling to understand the federal rules for radio frequency allocation.

Yet, they probably also have glimpsed the potential effectiveness of wireless technology as not just a simple communications tool, but also a productivity enhancer and cost saver. They have witnessed what can happen when they put wireless voice connectivity, two-way radio data and video communications tools in the hands of public safety agencies. Those who have taken the time to re-evaluate Wi-Fi may have discovered a technology than can be useful for daily government needs.

As local governments continue to assess how technology might improve the efficiency and productivity of departments and processes, they will invariably cross paths with wireless technology. Mobilizing workforces to complete work in the field that once had to be done in offices is a surefire way of cutting downtime and increasing productivity. Wireless also might be useful to more than public safety agencies.

For example, the wireless mesh network that Providence, R.I., has built for public safety uses likely will be made available to multiple city departments in the next year or so, according to Chief Information Officer Charles Hewitt. “We have to look at this as something more than just one group will use,” Hewitt says. “It will spread from police and fire use out to other departments, like city inspections and standards, and the public works department.”

Providence and Oklahoma City, Okla., which also has a wireless network, are examples of a small handful of cities that have started to be both assertive and imaginative about applying wireless broadly to support everyday government needs, according to municipal wireless consultant Craig Settles, CEO of Oakland, Calif.-based Successful.com. “Bringing wireless in is really just about being able to do what you do on a daily basis, but in a more efficient way,” he says. “That should be the starting point: How do you improve the effectiveness of your workforce?”

Settles suggests that city and county CIOs and managers ask their employees what they really need. For example, city inspectors might be more productive if they have wireless capabilities to file data reports from the field instead of traveling back to the office. Public works employees could turn around work orders more quickly if they could just text message their completion confirmations. Transit employees could better track city buses and hold drivers accountable to meet their timetables if the buses are networked using wireless. Networked school buses also could help ensure that children are not left on buses longer than the law allows.

Making wireless an organizational prerogative can help, but wireless still may not be an easy sell because of fears about security, privacy and interference with other technologies. Also, some administrators may not know the variety of wireless technologies available. “I had to sell everybody on the value of our wireless network, except for maybe the mayor,” Hewitt says.

A few years ago, Providence had to replace the public cellular digital packet data network that the police had used, because the cellular companies redirected their operations toward building a new generation of high-speed mobile networks. Hewitt wanted a replacement that might be more broadly useful to a greater number of city employees.

In addition to having to work with administrators who were not wireless advocates, Hewitt also had to deal with department heads who had their own ideas about which wireless technology might work best for their needs. “Everyone kind of had their own agenda as to what they wanted,” he says. “The [police and fire chiefs] had their own ideas. The mayor finally intervened. He likes to be the first one on the block with a new technology, and he wanted to get this done.”

The city considered the new generation commercial high-speed wireless service as one solution, because of its reliable, broad-scale coverage and support for voice, data and video. But, the city preferred a network that could be dedicated to its own data-centric needs, and a reliable network that would offer better security and privacy than a public cellular network.

While network access will be available to more city employees, it will not become a public access network, Hewitt says. “We knew after seeing what happened in other cities that we did not want to be in that business,” he says.

A private mesh network is just one way wireless is increasingly being used to help make local government more efficient. Wireless mesh, Wi-Fi, public cellular and private digital two-way radios can all play roles in a productivity-enhancing wireless environment. “For years, government access was mostly about Wi-Fi,” Settles says. “But now, it’s about what kind of access that government needs and how its employees will use it — the technology might be Wi-Fi or two-way radio or something else.”

While many public safety agencies understand the value of two-way radio, other government departments and agencies underuse the technology. Housed in one unit, digital two-way radios combine voice, text messaging, e-mail and other data capabilities, eliminating the cost of maintaining two networks and two devices. Some of the newer units have modern encryption for enhanced security and GPS satellite reception, which allows central dispatch centers to track vehicles’ locations, and to keep personnel accountable for their whereabouts in the field. Snow plow fleets outfitted with two-way voice and data radios could be managed in the field, redirected at a moment’s notice to streets that have not been salted or plowed, or to portions of roads reclaimed by snow drifts. In addition, plow equipment, such as plow blades and salt dispensers, could be accessorized with wireless telemetry technology capable of sending an alert to a two-way radio in a plow’s cab if there is an equipment malfunction or salt is near to running out.

Municipal government wireless environments probably will evolve along multiple technology lines, with Wi-Fi, commercial wireless service, private two-way radio and other technologies being used in different ways, and effectively co-existing because they use different radio frequencies, Settles says. To create and efficiently leverage those environments, cities and counties may need one or more champions to drive the cause — a visionary CIO, department heads or mayor — who sees the value of mobilizing their workforces. Those administrators should take an in-depth look at how wireless might change their worlds, how employee performance could improve using the technology, and how it might deliver measurable returns across their administrations.