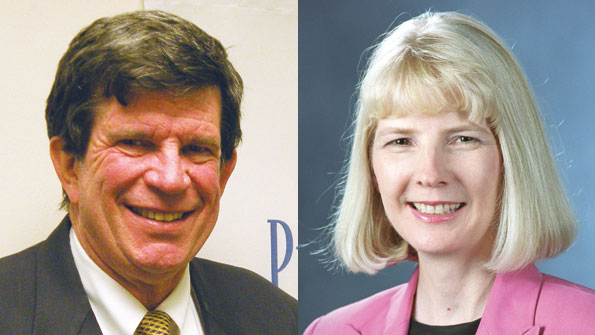 Goodyear: That formal process really sets up the opportunity for the informal relationship to develop and for more innovation to come into that relationship. A lot of people talk about unofficial expectations, and it's those things they really did expect but they didn't think through clearly enough, but as the two parties begin to work together, they learn, 'Oh, I can expect that. I didn't realize that was a possibility.' Or sometimes partnerships learn from a negative thing: 'Oh, that's not what I was anticipating, but I forgot to talk about that at the front end of the relationship.' So, that informal accountability really starts to develop as the relationship develops.

One of the things that we found recently with a study that we're doing with Centennial, Colo., is that shared values are a really important part of the development of that relationship. In that community, we found [an emphasis on] customer service — both the city and the contractors being very, very focused on that. A rare sense of integrity comes out of a really good formal contract being written that puts you on the basis of being honest with each other, telling each other the truth about whether the service is good or not, and working together to solve any customer service issues.

ACC: Are those values something the city was clear about when it was looking for its contractor, or did those develop over time?

Goodyear: They [developed] over time. At the beginning of the city's history, when it started contracting, I don't think they were as explicit and clear. Now, though, they're very clear, and if they're beginning to start with a new contractor, they put those right on the table from the beginning. In fact, they ask the contractor to comment on them in the RFP process. They have built that more informal accountability into their formal accountability process and their contracting process. I think there are some private contractors that were surprised to see it there but then immediately said, 'Wow, that's really great because you're not only being explicit about what your needs and expectations are for the services, but you're also being explicit about what your needs and expectations are for what kind of relationship the two of us are going to have.'

ACC: What are other best practices for governments working in a PPP?

Norment: There are a lot of steps that they should go through prior to issuing an RFP. We are increasingly training folks on how to do a Value for Money Analysis. What does the public sector really cost? What does it cost the public sector to really do a project? They need to do a Public Sector Comparator, which gives a benchmark against which you can compare what the private sector offering is going to be. All of these steps need to be done prior to the issuing of an RFP so that when the proposal comes back, you've got some way to measure if it is really a viable option for the public or not.

ACC: Are there any other best practices on the public side that they should be aware of during the contract or during the partnership?

Norment: These things can become political footballs. We've seen cases where you've gone through a substantial portion of the process, down to the actual negotiation of the final contract, and the political leader changes his mind, pulls the pin on the project and kills it. This is very detrimental from the standpoint that the public sector is injuring how it's perceived by the private sector. It costs an awful lot of money for the private sector to put together a proposal and negotiate one of these deals, and if at the last minute it's reversed, that discourages any future participation by the private sector with that particular entity.

ACC: What are the next steps for the PPP research at KU?

Goodyear: Our two projects [this year] are going to focus on collaborative leadership and on individual employees' motivation within their work environments. There has been a lot of research done in public service motivation, which is the concept that those who work for the public sector are not there for the money but they're there to serve; they're motivated by the intrinsic reward that they get in serving others. This study will look at private sector employees who are engaged in public service work through contracting and partnership. We're going to see if there is any difference in the public service motivation of that private sector worker who's doing public work versus the governmental employee who's doing public sector work. We think that will be a real interesting study to see if there are differences, and if so, what might they be and can we figure out why? And, if there aren't differences, that will be kind of an interesting result for us to see if maybe public sector work is intrinsically motivating and interesting to employees regardless of who your actual employer is.

For more best practices from NCPPP, visit www.ncppp.org, and for more about the University of Kansas School of Public Affairs and Administration's research and programs, visit www2.ku.edu/~kupa.