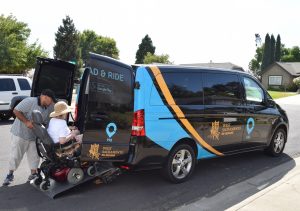 Launched in May 2018, West Sacramento, Calif., has pioneered an innovative new form of municipal microtransit that could very well serve as a model for cities in the years to come.

As part of West Sacramento On-Demand’s service, users use an app or place a phone call to request a shared ride. Within 10 minutes, one of 11 visibly-branded Mercedes-Benz vans pulls up to pick up the user. All rides are shared by community members headed in the same direction. The rides cost a flat rate of $3.50 ($1.75 for senior riders and riders with disabilities). The service also supports people in wheelchairs, non-smartphone users, youth ages 13 to 17 and unbanked riders. For those who have become dependent on the program, a $15 ViaPass ($7.50 for seniors and riders with disabilities) is available that offers up to four rides daily.

The West Sacramento On-Demand program came about as a partnership between the city and private ridesharing company Via Transportation in an effort to explore innovative public transit models and a multi-modal mobility network. Local bus service runs hourly in the city, but ridership has struggled — about 74.7 percent of West Sacramento workers drove to work alone in 2013 to 2017.

The pilot contract with Via between May 2018 and May 2019 cost $810,000. However, West Sacramento On-Demand offers the city and riders more than just the base service. Via’s proprietary technology provides real-time routing, smart ride-matching and a virtual stop model that wasn’t present in other vendors. The city also has a free transfer program that allows West Sacramento On-Demand riders to seamlessly transfer to a Yolo County (Calif.) Transit District Yolobus at no additional cost.

A recent survey of 521 riders shows that the primary benefactors of the West Sacramento On-Demand program have been seniors, young people, women and lower income households. As of April 2019, over 10 percent of the city’s population (over 6,500 people) have created an account for the service, and over 160,000 rides have been taken on the platform. A late 2018 survey showed that 75 percent of riders said that the rideshare program caused their satisfaction with city transportation to grow.

“We’re really proud of the project. We’re still learning a lot and we’re just excited to share with other cities who are getting into the rideshare microtransit game, and it’s an exciting time to be learning about this stuff,” says Sarah Strand, West Sacramento senior transportation planner and rideshare program manager.