Working with a Kansas school district and leveraging a U.S. Communities cooperative purchasing program, Ricoh made the school district just as efficient and savvy as today’s digital business world. 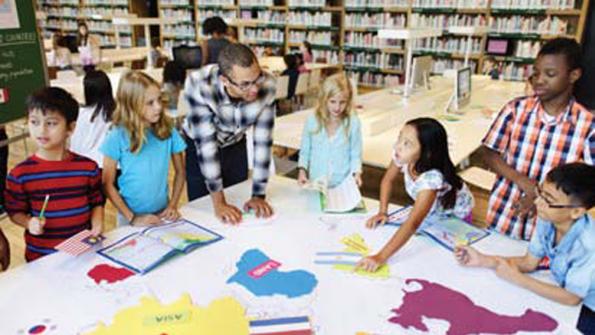 It seems counterintuitive that many school districts around the country are still heavily reliant on paper-based processes and print. After all, students engrossed in a K-12 education today are digital natives—they’ve never known another way of life. The majority of the teachers just now entering the workforce gained their professional footing in a digital-centric world. Even veteran teachers and staff have become increasingly digital savvy in their work and personal lives.

“Almost two decades in, you would think all school districts would have moved to a 21st Century digital learning environment,” said Drew Lane, executive director of information and communication technologies at Shawnee Mission School District. “The reality is that some have, and some haven’t.”

Shawnee Mission School District (SMSD) in Johnson County, Kansas knew the time was now for a paradigm shift in learning. Not just to transform teaching and learning into a digital environment—but to significantly lower costs, encourage greater collaboration, revitalize its print center, reduce its environmental impact and make information work for all of its teachers, students and staff.

SMSD is the third largest school district in Kansas. It serves approximately 28,000 students and has 4,100 teachers and staff that work in the district’s 33 elementary schools, five middle schools, one alternative site and five high schools.

In 2014, SMSD officially said hello to the digital age of learning.

SMSD set out to provide every student and teacher in the district with an Apple® iPad® or MacBook® Air. While the district wanted to create a modern digital learning environment, it also saw the opportunity to curb the costs of purchasing, managing and maintaining a desktop printing fleet along with a staggering amount of paper output. The district had long operated within a traditional education business model with a nearly 1:1 printer-to-staff ratio.

Within this traditional education model, the district purchased desktop printers for all the schools and oversaw the fleet’s maintenance, leaving each school to pay only for the paper it consumed. There were no rules or constraints around printing, leading to significant waste and extraneous printing. The district also had no visibility on output volumes or authentication at each printer to determine the heavy users at each school or prevent information from landing in the wrong hands.

Furthermore, when users wanted to scan information to share it with others, they had only one scan-to folder for each school that potentially left confidential information exposed. Google Drive was enlisted for some collaborative efforts, but few users knew how to use it and it was largely discarded—in lieu of paper-based collaboration.
All of this was causing operating costs to skyrocket at SMSD. A team of SMSD IT technicians labored to keep the fleet of inefficient desktop printers up and running.
“There were a number of areas where we thought we could reduce our costs while also facilitating a modern digital learning environment,” said Lane.

There was also the matter of the district’s on-site print center. It was losing money year after year and volumes were declining. Five employees managed the print center, handling about 2,100 jobs annually. They printed anything and everything with antiquated workflow processes that severely slowed delivery times. “We were losing money in the print center because it wasn’t properly organized, not because we produced bad work,” said Lane.

To submit an order, print center customers had to complete a purchase order with requisition number—along with a series of other manual steps. A single project could take weeks to finish, even when there were few other print jobs in the center.

The district needed a partner with expertise to analyze the environment and focus the print center’s tasks while increasing efficiency and capabilities.
As the district’s long-time copier provider, Ricoh was a well-known entity to SMSD and invited Ricoh to submit a print optimization plan to support the district as it transitioned to a modern digital learning environment.

“Ricoh typically deals in printing and machines that generate clicks and hard copy. We approached them with a proposition to use their machines as little as possible and they were interested,” Lane said.

Ricoh immediately understood the mission—make the school district just as efficient and savvy as today’s digital business world. That’s where the students are eventually headed. And that’s where SMSD wanted to be.

That scanned information can be accessed electronically from any internet-connected device—anywhere, anytime. Then, teachers can send documents electronically to their students, who have immediate access to the information on their school-issued iPad or MacBook Air.

“The long-term goal was to change the way we teach. To get our staff out of the mindset of print and into an environment where we share and collaborate digitally,” said Lane. “Ricoh helped us make that happen.”

Ricoh implemented Equitrac® Express print audit software to hold teachers and administrators accountable for what they do print. With this technology, users send their print jobs to an MFP and have to authenticate at the device via their badges to retrieve their printed document. This also ensures that only the authenticated user has access to sensitive district information.

Also, every document printed at one of the Ricoh MFPs across the district is tracked and analyzed through Equitrac. SMSD receives customized reports that show who is printing, what they are printing and which device they are using. Follow-Me functionality was also activated within Equitrac to allow SMSD staff to print anywhere on campus they happen to be.

“Follow-Me printing has been very well received,” said Lane. “If there’s something you absolutely need to print but are in a different building on campus, you can print to the building where you’re at, grab it and go.”

Still, some print jobs are too large or complicated for teachers to produce on the Ricoh MFPs. Ricoh Managed Services took over the day-to-day operations at the district’s print center and limited the jobs it could perform to streamline the workflow and increase efficiency. Teachers now send print jobs electronically in a single step using the TRAC web submission tool implemented by Ricoh. The automated system submits print jobs in seconds and teachers can track the progress of their job in real time online.