Keeping a sharp eye on security 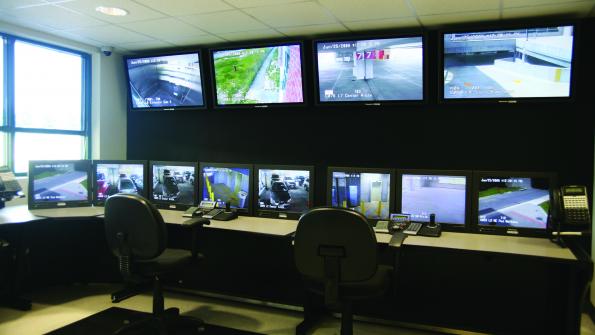 Keeping a sharp eye on security

IP-based video surveillance solutions are fully entrenched, and local and state governments have many more choices when designing, deploying or upgrading their systems. Cameras and other devices have a dizzying array of features, and users have to determine which of them are essential, useful and beneficial to their specific applications.

Maximizing overall system performance is a critical objective that depends on following seven best practices. These guidelines can help users decide what systems to purchase.

Video is part of — and complementary to — a larger security system. Video is perhaps the most high-profile technology that is used to secure public places, but it is not the only one. Biometric and card-based access control systems restrict building entrances, alarm systems detect intruders, and hands-free emergency phone stations allow anyone to call for help.

Using video to complement those other technologies enables security operators to have “eyes” on any unfolding event. For example, if a non-authorized individual attempts to enter a facility without valid access credentials, an integrated camera at a building entrance can provide an image to enable security personnel to determine whether to grant access.

Use cameras with long viewing range to secure the perimeter.The garage also illustrates another best practice: the use of long-range pan-tilt-zoom (PTZ) video cameras to protect the perimeter. PTZ dome cameras can be strategically located mid-way on the sides of a parking garage building to provide views in either direction. The cameras can zoom in to a precisely detailed image from several hundred feet away. Covering the building perimeter using fixed-view cameras would require many more cameras than the long-range PTZs, which also enable operators to zoom in on any target in real-time.

Consider lighting challenges, such as backlighting and viewing through glass. Many public venues have an abundance of windows, which can cause excessive light to flood a video camera’s image plane. Dramatic differences between light and dark areas compromise the ability of video cameras to view someone standing in the shadows. The problem is particularly obvious if someone is standing with their back to the sun amid darker internal lighting. Cameras mounted indoors in one lighting environment to view outdoor activity with different lighting also present a challenge.

Some new cameras offer face dynamic range, which seeks out the human faces in an image and applies optimum clarity. Another feature, called adaptive black stretch, reconciles differences between white and black levels to improve images in shadows and extreme light. Greater dynamic range on cameras — the range of values between light and dark areas — yields better images overall.

Consider a hospital where a two-story atrium provides a sunny place for patients and visitors to gather. The interior design promotes themes of nature and healing, but the many windows contribute to lighting challenges. Using cameras with a wider dynamic range and pixel-based contrast image correction circuitry delivers superior images regardless of contrast within a single scene or changing lighting conditions. At the hospital, the cameras can see inside and outside glass partitions and doors simultaneously.

Minimize camera counts using high-definition (HD) and PTZ.Although PTZ cameras can reduce the need for fixed-view cameras to cover a perimeter, a real-time human operator is needed to direct the camera to view what is happening. Another approach is to use megapixel and HD cameras. They offer higher resolution that enables them to cover larger areas while still allowing a region of interest on video to be magnified to see an important detail, such as a license plate number or a person's face, even in a recorded image. By enabling the system to be built with fewer cameras and also requiring less infrastructure to support the cameras, megapixel and HD cameras help reduce costs.

Create systems to minimize video storage needs.Network cameras are connected to a central video storage system using a computer network. Video systems, especially those with a high camera count, can require a lot of network storage, but there are ways to save on the amount of storage needed. For example, using a newer compression format that creates smaller video data files — H.264 High Profile recording — minimizes storage needs. Another feature on some cameras is variable image quality on specified areas (VIQS), which enables non-critical parts of a video frame (such as the sky) to be encoded at a lower resolution to create smaller video files. Other approaches to minimizing storage include recording at a slower frame rate; for example, five frames per second rather than 30 frames per second.

Choose equipment that can withstand challenging environments. Using systems rated to withstand environmental challenges is another best practice. At a prison located in the subtropical climate near the Gulf of Mexico, humidity and salty air — not to mention the possibility of hurricanes — can be an issue for any equipment installed outdoors. Cameras used outdoors are IP66-rated for resistance to water and dust, which ensures their continued operation in environmental extremes. A camera's operating environment also includes how the cameras are treated or mistreated.

Use motion detection and video analytics to minimize operator fatigue and data usage.The typical concept of a video surveillance system may include a person watching a wall of monitors. However, that scenario is not the most effective way to operate a system. The fact is, it is impossible for one person to watch a video monitor for any length of time, waiting for something to happen, without losing interest. The same is true if it is a wall of monitors — real-time monitoring is not practical in most situations.

Instead, a video system should be designed to alert an operator to look at the screen when there is something to see. One approach is to use the camera's motion detection capability, whereby the camera is programmed to begin recording or to supply video to a specific screen when something moves in the viewing area. That approach works especially well during off-hours when any movement is more likely to reflect a security issue. Sophisticated video analytics can trigger recording or supply video when someone crosses a virtual trip wire, when a designated object moves or is moved, when a object that should move doesn't, or even when someone is walking in the wrong direction (could be entering a restricted area through an exit). Using those technologies to trigger real-time video and/or recording enables systems to be more effective while minimizing operator fatigue. Recording only when triggered by motion or a video analytics alarm saves on network storage, too.