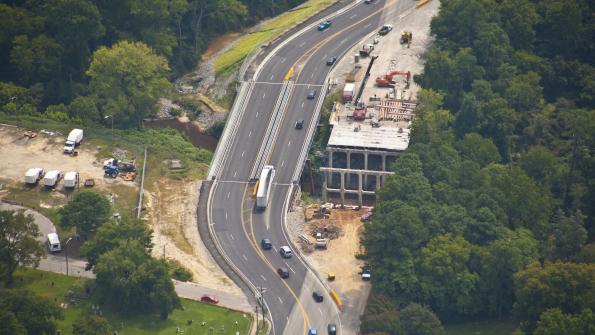 The value of public works construction will rise by 5 percent from $113.4 billion in 2014 to $118.8 billion in 2015, predicts the “2015 Dodge Construction Outlook” from Dodge Data & Analytics. Some of that boost in construction, the report notes, is due to states’ growing role in facilitating increased infrastructure funding.

Dodge analysts say that the public works sector won’t see much in the way of increased federal funding in 2015. Instead, the report explains that states and cities are turning more to user fees, construction bonds, and public-private partnerships (PPP) to support urgent and critical infrastructure projects.

Funding for public works construction can be a challenge for local governments, says Paul R. Soglin (photo below, on right), who is mayor of the city of Madison, Wis. “With the federal and state governments pulling back, each year becomes more challenging in maintaining public works systems, particularly public transportation. Clearly, this nation has lost its way in investing in public systems related to transportation, communications, and energy systems. President Eisenhower would be shocked.”

Local governments, says Soglin, cannot compensate for inadequate federal commitments. “Recent reports on deteriorating bridges reflect the magnitude of the problem. Since member of Congress are not held responsible for health concerns related to air pollution, billions of dollars wasted on traffic congestion, or the economic consequences of massive student debt, there is little reason for optimism in this mindless era of cutting progressive taxes.”

Public buildings construction is also on the upswing. The Dodge report predicts that value of construction of police fire, detention, courthouses, legislative chambers and other public administration buildings will grow by 6 percent, reaching $7.5 billion in 2015. The floorspace of the new projects will reach 18 million square feet, which is 5 percent more than 2014 levels. Courthouse projects in California, Missouri and other states account for much of the public buildings construction underway in 2014-2015, say Dodge analysts.