After more than 40 years, the police and fire facilities in Ocean Springs were in dire need of an upgrade. As the city faced Hurricane Katrina in 2005, it became more apparent that the city needed to expand and upgrade its public safety facilities, computer and Internet communications and programs and equipment.

“We knew where we were, and had a vision of where we wanted to be, but needed a creative solution to getting there,” says Anne Pitre, Ocean Springs’ public relations officer. 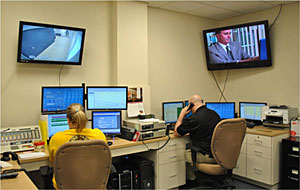 In 2007, city leaders successfully lobbied the state legislature to allow them to hold a referendum placing a 2 percent levy on restaurants and lounges to fund a new Public Safety Center and several major recreation projects. The funds would also be used to promote economic development and tourism. Mayor Connie Moran and the Aldermen and a committee of private residents launched an aggressive campaign to convince voters to support the measure. More than $25,000 in private funding was raised for polls, signs, pamphlets and commercials. Residents passed the referendum, clearing the way for a new public safety center.

The new center includes two facilities on the same campus in the center of the community: a fire station with an Emergency Operations Center, and a complex containing a new police station, municipal jail and courtroom.

“The new facilities contain state-of-the-art equipment,” Pitre says. “The training room in the fire station converts to our Emergency Operations Center, which is built to withstand harsh weather conditions, ensuring that the government will receive information in a timely manner and continue to function in the event of a disaster.”

The center’s new technology has resulted in faster response times when emergencies are dispatched, Pitre says. And the new facilities are designed to be energy efficient and strong, built with room for future growth of the police and fire brigades. In addition, the facilities are designed to improve the quality of the time that the public safety employees spend on site, with living quarters, modern kitchens and fully equipped fitness facilities.