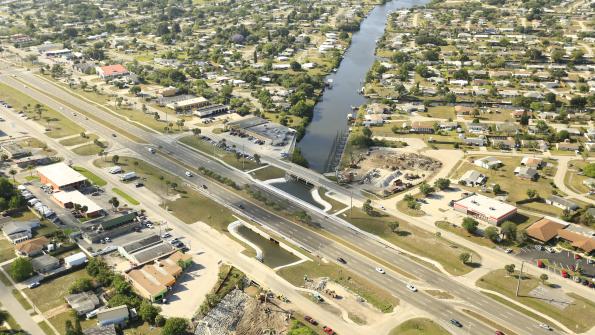 Like many communities, Charlotte County, located on the southwest coast of Florida, has had its share of problems due to an aging water infrastructure system. Flooding from stormwater, in particular, was becoming a major issue for the community, which prompted county officials to initiate a master stormwater study.

“After a pair of 100-year storms exposed the inadequacies of a 1950s-era stormwater drainage system, the county did a master stormwater study to take into account double-digit population growth rates and miles of new roadways,” Charlotte County Public Works Director Danny Quick says. “The final piece of the stormwater puzzle required moving millions of gallons of water beneath U.S. 41, a six-lane highway that stood between the source of that water and its eventual destination: Charlotte Harbor.”

As a result of the study, the county determined the waterways under U.S. 41 couldn’t handle the increased flow caused by bigger storms and new developments in the area. The only way to accommodate the desired flow rates was to increase the size of the pipes under the road crossings.

But rather than cutting through the highway and its access roads, disrupting traffic and generating huge costs, the county investigated microtunneling as an alternative. Microtunneling is a digging technique used to construct small tunnels using remotely operated boring machines.

Ultimately, the plan required a 96,000-pound boring head. It was built to bore five 84-inch culverts and three 60-inch culverts five feet below mean sea level for 150 feet under six lanes of traffic.

“A project of this magnitude presents all kinds of challenges, particularly when it came to keeping U.S. 41 open to traffic during construction,” Jeff Keyser, U.S. 41 Microtunnel Project manager, says. “Remarkably, all has gone according to plan.”

The project was completed ahead of schedule and under budget at a total cost of $8.9 million.