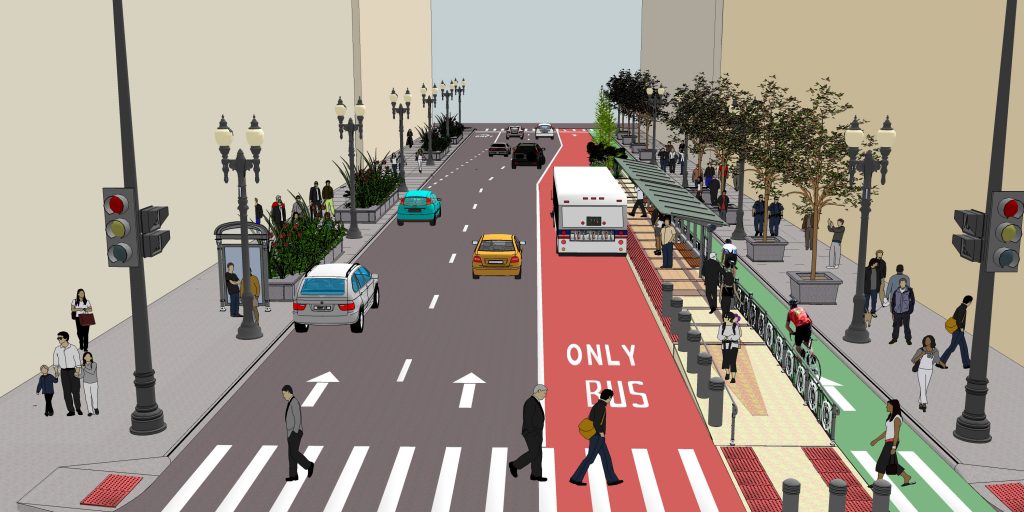 Cost, flexibility prompting many U.S. cities to give BRT a second look

A confluence of spiraling costs, rising environmental concerns and a huge influx of federal dollars is prompting government officials nationwide to give a public transportation option which has been with us since the early 1970s a second look.

Bus Rapid Transit (BRT) is a bus-based public transport system that combines technology, road designs and route planning adjustments to provide higher capacity, improved reliability and faster service than conventional bus systems. And while there may be some question as to what city implemented the first comprehensive BRT system—both Brazil’s Curitiba City and Runcorn New Town in England lay claim to that title—there can be little doubt that BRT has had a positive impact on public transportation worldwide.

As of 2018, 166 cities on six continents have implemented BRT systems, handling more than 32 million passengers daily. In Latin America alone, 54 cities boast BRT networks. Despite the success BRT has enjoyed around the globe, the U.S. has, until recently, shown a marked preference for fixed rail projects. Only 13 American cities have implemented BRT systems to date, although 34 projects currently seeking federal investment are in the pipeline.

The Washington Post reports that the Federal Transit Administration awarded $375 million to help build BRT lines in 2020, the largest amount in the past decade. With President Joe Biden’s massive infrastructure bill promising cities another $39 billion for public transit projects, BRT would seem to be a no-brainer for municipalities in need of improved public transportation.

Despite those enticements, some U.S. cities have been slow to jump on the BRT bandwagon. In Maryland, for example, Democratic Senators Ben Cardin and Chris Van Hollen are trying to revive Baltimore’s Red Line project, a 14-mile light rail line projected to cost $2.9 billion or $205 million per mile. Their support for light rail comes despite the fact that a BRT system that parallels the layout of the Red Line and serves the same parts of the city would cost only $20-$50 million per mile while capturing 80-85 percent of the projected light rail riders.

Why is BRT such a hard sell? To be sure, BRT, like any transportation system, has its drawbacks. On a practical level, BRT lanes that do not interfere with mixed traffic are not always attainable. In addition, implementation of new BRT lanes with street widening may displace both parking and pedestrian paths, and potentially divert customers from existing merchants along the route.

Beyond that, urban planners and transportation experts tend to favor fixed rail systems. This is, in part, due to an image problem. Light rail is generally perceived as offering commuters a rapid, comfortable alternative to their own vehicles where they can relax or use Wi-Fi to catch up on work or emails. BRT systems, on the other hand, are viewed as little more than a limited upgrade of existing bus service, which is widely regarded as slow, dirty and congested.

The skeptics also argue that subway and light rail systems open up underpopulated or neglected neighborhoods and kick-start regeneration. By providing a fixed, reliable corridor, such systems give property developers and other businesses the confidence they need to invest in an area. In New York, for example, the Number 7 subway line extension into the formerly industrial area of Manhattan’s West Side has spurred investment to create a dynamic new neighborhood.

In a head-to-head comparison with BRT, however, it becomes more difficult to justify an investment in a fixed rail system.

While there is still a place for fixed rail systems, BRT is an option that should always be considered—particularly in markets where the population density falls short of the kind of density (20-30 persons per acre) needed to justify the high cost of subways or light rail. For a new generation of workers interested in sustainability and living closer to their workplaces, BRT represents a viable alternative that can substantially reshape America’s urban landscape.

Wes Guckert, PTP is president and CEO of The Traffic Group, a leading Service Disabled Veteran-Owned Small Business traffic engineering and transportation planning firm serving clients nationally and internationally. He is also a fellow of ITE and on the National Small Business Leadership Council.