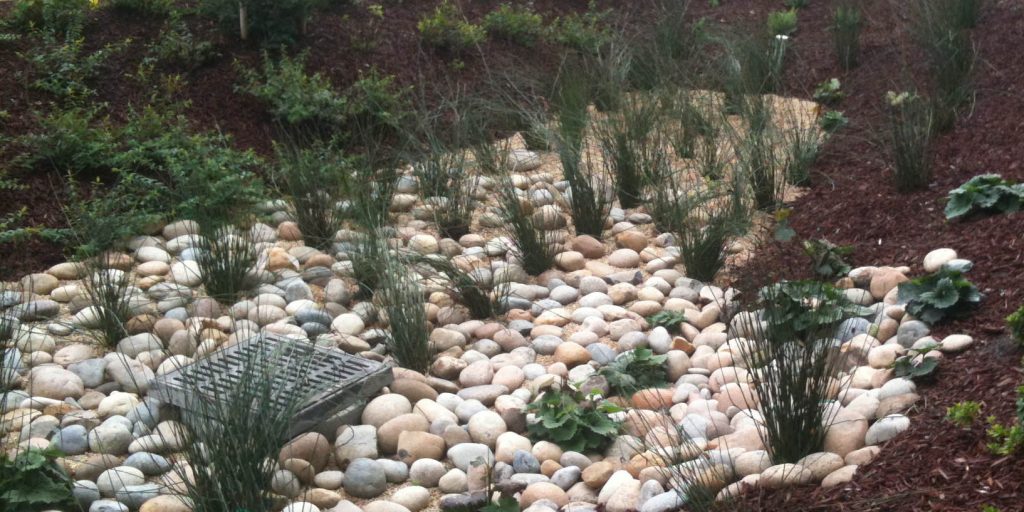 With rising sea levels outpacing the retention capacity of shoreline infrastructure and impervious city surfaces diverting stormwater into floods, it’s clear that climate change and its environmental impact on communities—especially those that are underserved—demands a more sustainable solution.

Living shorelines, a type of green infrastructure that’s organically constructed with nature in mind, could be an answer.

According to Michael Johnson, of the National Oceanic and Atmosphere Administration’s greater Atlantic region, the East Coast is experiencing a 3- to 4-millimeter sea level rise each year, “and the rate is increasing.” While this environmental impact is most visible during extreme weather events like hurricanes, “It’s also increasing the rate of sunny day flooding—or nuisance flooding—known as ‘king tides.’”

Unlike hard infrastructure that’s fixed in place once the concrete is poured (which definitely has its place), living shorelines can better adapt to environmental changes because they’re “made of natural materials such as plants, sand, or rock,” according to the National Oceanic and Atmospheric Administration’s website. When sea levels rise, aquatic plants, which act as natural barriers among other things, move up the shoreline with the tide.

In Stoningham, Conn., city officials plan to build such a shoreline not far from Mystic Seaport. With support through FEMA’s New England pandemic response, the coastal resiliency initiative will be built in conjunction with the remediation of a brownfield site, according to Danielle Chesebrough, who serves on Stoningham’s selectboard. Chesebrough noted the project’s scope will include “oyster castles, changing the topography, re-sloping, replanting native vegetation.”

Living shorelines are one example of the effectiveness of green infrastructure—others include bioswales, permeable pavement, green roofs, urban tree canopy and rain gardens—highlighted in the webinar, “Green and Nature-Based Infrastructure Solutions for Economic Recovery.” Its focus was on alternative ways communities can mitigate environmental impacts like flooding, tidal surge and droughts, specifically in the northeastern United States.

From trees planted in urban settings to rain barrels, the strength of green infrastructure lies in its many “co-benefits,” according to Elise Simons, of the Environmental Protection Agency (EPA).

And along with being effective, they’re cost effective. Small-scale, affordable green infrastructure projects can be tackled at the community level—which make them an asset in the pursuit of environmental justice, the fair treatment of all people in regards to environmental laws and climate change, according to Arielle King, an attorney at the Environmental Law Insititute.

Underserved communities are often those most impacted by climate disasters, many of which were built in floodplains or other low-lying areas. Additionally, historical policies and a history of prejudice can “limit the capacity of their communities to adapt to climate change.”

In considering green infrastructure initiatives, King said it’s important to reach out to community members and try and get as many people involved as possible.

Given their many co-benefits, “Nature-based solutions intersect with these (social) issues because green infrastructure is an effective solution to climate change,” Simons said, noting “the most powerful and effective” of all green initiatives is tree planting.

More not being effective, some hard infrastructure can be detrimental during extreme weather events. Pointing to lessons learned during Hurricane Katrina, Johnson said seawalls in New Orleans actually retained seawater when they were overrun.

A lot of infrastructure wasn’t designed “for future conditions and elevations,” he said. “This causes the structures to be overbuilt, or rebuilt at higher levels in the future, which costs a lot of money.”

In contrast, Johnson noted that green infrastructure projects like living coastlines provide financial benefits through stormwater protection, tourism and habitat protection for commercially fished species—far more “than the cost of maintaining them. … Coastal wetlands also provide climate benefits through carbon sequestration. These habitats can absorb and sequester carbon in the organic material and soil for hundreds to thousands of years.”

“The capacity issues to deal with these new innovations and understand how to start these projects or scope them is a huge factor,” Thomas said. When compared with “some of these big infrastructure projects—things that senators can point to and say, ‘I brought this $50-million shoreline project—communities with smaller needs, “it’s harder to get attention.”

In this, regionalization can be an effective way for small communities to access large grants. But they can also act on their own by offering incentives like rain barrel giveaways to get community members involved.

While green infrastructure projects are “not a silver bullet,” they certainly can help, Simons said.