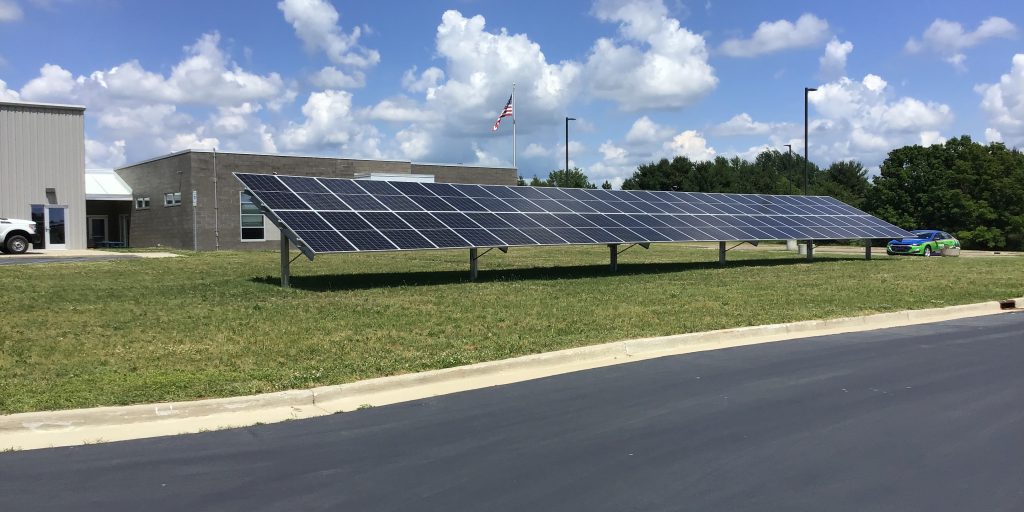 With the rising cost of electricity and the looming threat of climate change, municipalities across the United States are turning to solar as an efficient way to offset costs and reduce carbon emissions.

In Harrison, Mich., Tracey Connelly, the city’s manager and clerk, says the town is finalizing a 661-kilowatt solar project costing a little more than $1.16 million that’s expected to offset about 90 percent of municipal electricity consumption. Energy that’s not used immediately can be fed back into the region’s electric grid for a credit.

Saving money “was the main reason. It was also good for the environment,” Connelly said about the project, the plans of which were finalized at the end of last year by the Planning Commission. Since its inception in 2019, Connelly says the initiative has received strong support from the city’s 2,000 or so constituents, as it minimizes Harrison’s “impact on the climate, reducing our consumption of fossil fuels,” while simultaneously cutting the city’s energy bill.

“There was no opposition for it, and I’ve received a lot of good comments,” Connelly said.

The project’s completion comes at an opportune time. Without the panels, which were installed by North Carolina-based POWERHOME SOLAR and are projected to produce 750,000 kilowatt hours of electricity annually, Connelly estimated the city’s electricity expenses would rise in the next few years from the currently budgeted price tag of about $130,000 per year to more than $200,000 per year.

“The city of Harrison is always forward thinking. We do our best to recycle and those kinds of things. Moving to solar seemed like the next approach,” Connelly said. “We installed (panels) in five locations, so it’s been a pretty large project in and of itself.”

Those municipal buildings that now house panels—City Hall, the fire hall, water tower, pumphouse and wastewater treatment facility—were selected because they’re Harrison’s largest consumers of power. Once the city makes back its upfront costs (in an estimated five to 10 years), Connelly says city leaders plan to put the money that’s been saved toward infrastructure upgrades like roads and bridges.

When the physical solar panels have been paid off, “The power is basically free,” said Jayson Waller, founder and CEO of POWERHOME SOLAR, which was founded in 2014 and has a footprint in 15 states. “In essence, they’re saving a ton of money. That’s kind of where this country is going.”

“We (installed) the EV charging stations with the solar panels as well, so they can charge busses and city cars,” Waller said. Notably, while POWERHOME SOLAR predominately serves residential communities, Waller says he’s seen an increase in the number of municipal and large-scare commercial projects—signaling a broader trend.

A recent report from Environment America Research & Policy Center and Frontier Group on the rising popularity of municipal solar found that “More solar capacity was added to the (American) grid in 2019 than any other energy source. The United States now has more than 77 gigawatts of solar photovoltaic capacity installed—enough to power more than one in every 10 homes in America.” In this, the report notes that cities have played a major role in driving America’s solar innovation: “The amount of solar power installed in just seven U.S. cities exceeds the amount installed in the entire United States at the end of 2010.”

Of 57 cities surveyed in the report, 90 percent more than doubled their total photovoltaic capacity between 2013 and 2019. There are a number of reasons for this, including environmental benefits and the increasing cost of electric power. With solar panels, Waller noted that cities like Harrison are “able to budget and maintain costs; with that flatline cost, they know where they need to be. It’s good for budgeting, it’s good for a return on their investment.”