A My Ride bus in Rock Hill, S.C. Image courtesy of City of Rock Hill. 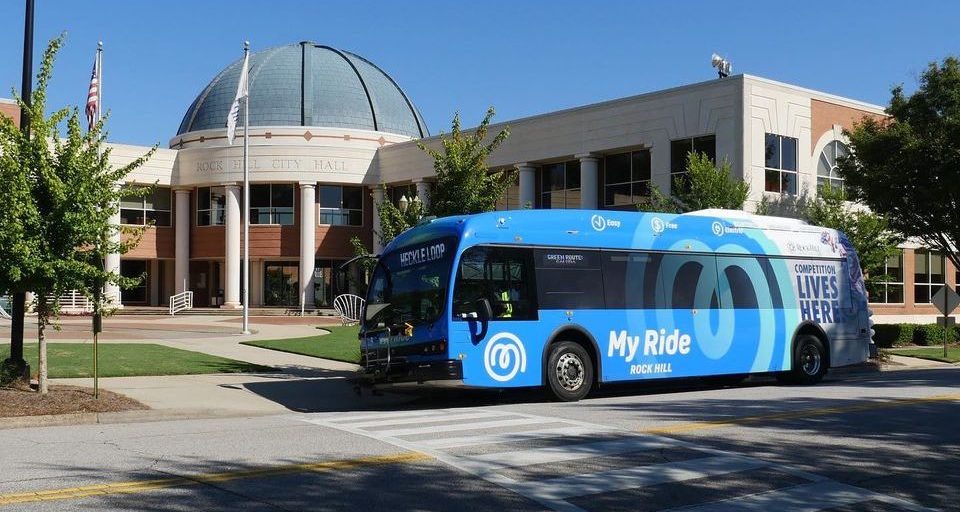 Rock Hill, S.C.’s My Ride project is a great example of how a city can solve multiple issues with one innovative project.

Using electric buses was a deliberate, multi-faceted decision on the city’s part. Part of the decision was practicality — fuel and maintenance costs are less expensive for electric buses than for diesel buses. The buses are quiet, aesthetically pleasing and rider friendly. But the city has also been able to reduce about 337 metric tons of CO2-equivalent emissions, as well as just under a metric ton of other greenhouse gases and particulate matter per year.

Moreover, a transportation study of Rock Hill and Fort Mill, S.C. from that same year found that a significant number of zero vehicles households existed in parts of Rock Hill. Those areas have traditionally had limited access to healthcare, groceries and shopping.

The Rock Hill government operates by the motto, “Rock Hill for All” — which entails the city striving to provide opportunities and minimize barriers for all of its residents. Thus, a grassroots effort to increase accessibility for residents emerged. Stops were ultimately placed strategically to give people access to homeless shelters, social service non-profits and food pantries.

“Our fare-free, all electric, fixed route bus system, affectionately named My Ride, is in the business of creating opportunities for ALL the people of Rock Hill,” Rock Hill Mayor John Gettys says. “Fresh food, medical appointments and employment are now a real possibility for more people than ever before since transportation is no longer an impediment to building wealth and prosperity in our community.”

Funding also played a major role in developing My Ride. My Ride’s initial investment was $7 million, with about $2 million in ongoing annual contributions. However, the city utilized unused Federal Transit Authority (FTA) dollars in a way that reduced its initial capital purchase by 80 percent and annual operating costs by 50 percent.

Subsequently, the city council insisted that the city make My Ride fare-free. The council felt that students and visitors would benefit from being able to hop on and off the buses without worrying about fare. Ultimately, an infusion of private sector funding allowed the city to only contribute $380,000 per year to the project.

My Ride debuted in June 2019, four years after the idea was first proposed. The city met its initial goal of 4,100 passenger trips per week in six weeks. The COVID-19 pandemic has affected operations — the city frequently disinfects and wipes down the buses to keep residents safe. But even during the pandemic, about 3,000 passenger trips are still taken each week.

In the 18 months since it debuted, over 260,000 trips have been taken on My Ride. Plans for expansion are already underway, and more financial partners have expressed an interest in being a part of My Ride.

“Our community turned a corner when My Ride began transporting our people to a brighter future,“ Gettys says.