Volunteers load cases of water into the bed of a truck during a mass water distribution in Houston on Feb. 19, 2021.(Photo by Justin Sullivan/Getty Images) 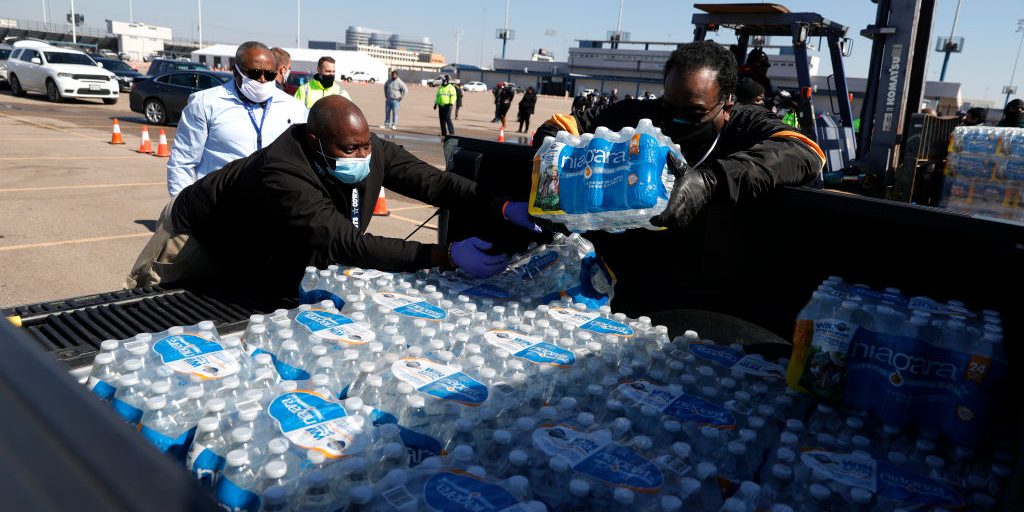 As many Texans remain without power due to an ongoing cold snap in the state, local governments are taking varied measures to try to help their communities where they can.

The Electric Reliability Council of Texas (ERCOT), which controls most of Texas’s power, said on Friday that it has returned to normal operating conditions, CNBC reports. However, about 184,000 customers still didn’t have power, and utility officials said that limited rolling blackouts were possible depending on electricity demand.

“Many residents, myself included, have been without power and water… we are working to keep operations in place,”Plugerville, Texas, Mayor Victor Gonzalez said in a news release on Feb. 16.

Many local governments, such as Austin, Bell County, Denton and Denton County, El Paso, Travis County and Whitehouse, have issued disaster declarations or declared states of emergency, according to local news sources.

Travis County was expecting two trucks carrying bottled water to distribute water across the county, according to KXAN. Travis County Judge Andy Brown admitted that it wouldn’t be enough for the area’s entire need.

“We still don’t at this point know the full extent of who doesn’t have water, right now,” Brown told KXAN. “That’s concerning.”

Some Texas governments have worked to prepare for severe weather. El Paso officials told KFOX14 that they had spread salt and sand on bridge overpasses and major streets, as well as setting up multiple warming shelters.

Some have also been able to aid residents. San Antonio Water System, a public utility owned by San Antonio, opened seven water distribution locations at its pump stations across the city to provide water to customers, according to a news release. Each customer is allowed five gallons of water.

Others haven’t been able to do much to help residents. Bastrop County, Texas, wasn’t able to open any public shelters or warming stations due to power-related issues, according to the Austin American-Statesman.

“This will all pass when the weather warms up,” Bastrop County Judge Paul Pape told the newspaper. “But I hope all in positions of responsibility will remember the pain and suffering and be better prepared the next time something like this happens.”