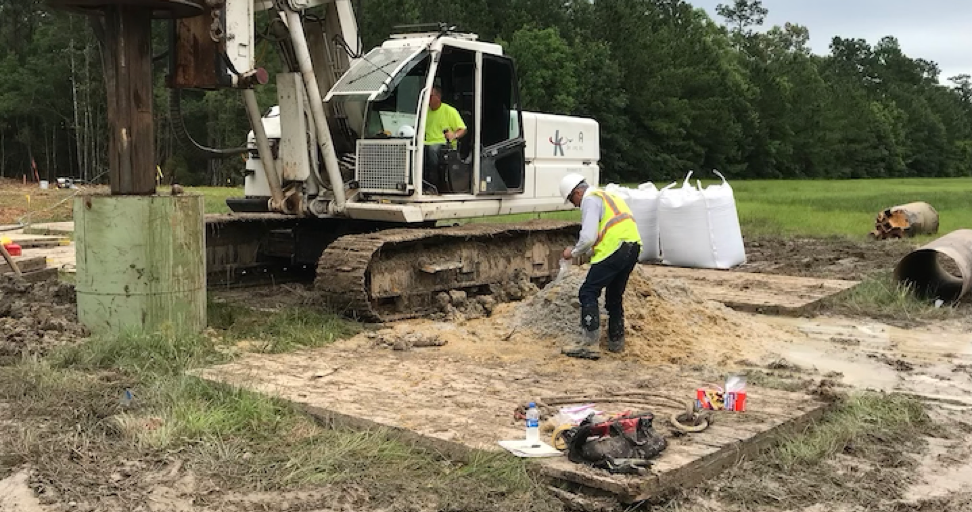 The Sabine River Authority’s $75 million pipeline project, launched in early 2016, began with the task of dewatering, conducted by Houston-based TerraFirma Earth Technologies. The company was selected for the challenging dewatering of tunnels under an open highway, an active railroad and a set of gas pipelines. The project delivery method is Construction Manager at Risk (CMAR), with Garney Construction as GC/Construction Manager.

According to David Burkhart, director of central pipe operations at Garney Construction, the CMAR delivery method allowed Garney to select the dewatering subcontractor based on a combination of qualifications, expertise, and cost. “We are most impressed with the experience and efficiency of TerraFirma’s field crews and personnel who installed the equipment. Once on site, crews performed the work quickly to install dewatering equipment ahead of Garney’s pipe crews and tunneling operations to maintain the project schedule.”

Providing a border between Louisiana and Texas in far Southeast Texas, the Sabine River flows roughly 100 miles, from US 190 to the Gulf of Mexico. The area is desolate, with only two highways crossing the river: Highway 12 and US 190. Flowing through Newton and Orange Counties, the river provides water for local industry and municipal customers in Orange and Newton County. The infrastructure and location of the existing pump station, constructed in 1934, as well as changes within the river, have occasionally limited Sabine River Authority’s (SRA’s) ability to withdraw water from the river.

With CMAR delivery, constant collaboration throughout the entire project is key. The CM/GC serves as the construction manager, collaborating with the owner and all contractors throughout the entire project. This delivery model is increasingly preferred because the contractors are brought on at the earliest stages of the project. The CM suggests updates to the design that can positively impact project costs, scheduling, materials, and efficiency based on collaborative discussions with subcontractors and owners.

During natural low flow and drought conditions, the SRA has released water from upstream Toledo Bend Reservoir to raise the level of the river at the existing pump station’s intake canal so that water can be pumped to these customers. The SRA received a $75 Million loan from the State Water Implementation Fund for Texas (SWIFT) program in 2016 to improve the water system by constructing an 85-million-gallon-per-day raw water pump station along the River, along with several miles of water conveyance pipeline to serve its customers. The new pump station/pipeline will eliminate the need to release water from Toledo Bend Reservoir during periods of low flow at the river.

TerraFirma Earth Technologies prepared the way for the 7 mile pipeline project by dewatering the bore and jack pits at three locations utilizing closely spaced deepwell dewatering wells. The 66” diameter pipeline had to be tunneled underneath the active Kansas City Southern railroad (143 ft in length),  a set of active gas pipelines (110 ft in length), and Highway 12 (161 ft in length). Due to a period of very heavy rains just before construction began as well as during construction, the river rose ten feet, causing a subsequent rise in the water table and making the already difficult access to the various low-lying, swampy sites even more difficult to reach. Creative solutions were in order.

“There were definitely some hurdles we encountered that required special equipment and changes to the original dewatering plan,” said David Giles, President of TerraFirma. Mr. Giles explained, “We were charged with dewatering three tunnel crossings—one beneath Highway 12, one beneath an existing set of gas lines, and another beneath the active Kansas City Southern railroad. We had to dewater 160 linear feet from entry shaft to exit shaft beneath Highway 12 while it was in use. The Authority didn’t want to disrupt traffic.

“Access to the low-lying, swampy areas was our biggest challenge. It was necessary to rent special equipment to just get out there. TerraFirma crews installed well groupings on each side of the crossing to surround the access shafts. The shafts had to be large enough to facilitate the massive boring machine, and extended up to 20ft deep, well below the groundwater level. First we had to dewater the shafts. Then came the job of dewatering the 66” diameter water pipeline between the two shafts, which required lowing the water table from both sides of the road even further. The traffic didn’t even know we were there.”

In addition to the swamp-like conditions, the recent rains posed another set of challenges, according to Mr. Giles. “Because the river water level was ten feet above normal, there was a subsequent rise in the water table in the adjacent areas where we were working. In addition to the need for mats to access the site, multiple layers of mats were required to raise the rig to an elevation which allowed us to drill and set our dewatering wells. The timber mats were cabled together to form a temporary platform we could walk on. The machinery had to work from the mats as well, due to the extremely soft ground. Additionally, larger horse-power pumps were required to deal with the increased flow rates due to the higher than anticipated groundwater level.”

According to Giles, TerraFirma chose the bucket-auger method for installing the wells. The advantage to this method was its ability to drill the large diameter bore hole (30”) to a depth of 60 ft or more. “The over-sized borehole maximizes the flow of ground water to the dewatering well, ensuring the dewatering system achieves the desired results,” he explained.

Chad Sharbono, project manager for Garney, added that another complication interrupted the progress of the dewatering. “Access to the river in such a rural location with no drainage structure in place, with the rapid fluctuation of the river, presented unique circumstances. There were tight conditions TerraFirma had to get through to have access to the railroad and other tunnels. They were dewatering only about 100 feet from the rising river. Flows were changing constantly. The collaboration we achieved due to the CMAR delivery model gave everyone reason to come to agreement. We were able to see unusual risks and budget for those, avoiding possible contention. In the end, both parties were able to manage a solution”.

“As of Aug. 9, 2019, TerraFirma completed the installation of the dewatering system for all three tunnel locations,” Giles said. “The tunnels have been successfully installed; however, the dewatering wells remain in place, until the water conveyance pipeline tie-ins can be made. TerraFirma did a great job installing the wells. They worked perfectly and we were able to install the tunnel, without delays, and within the owner’s budget.”