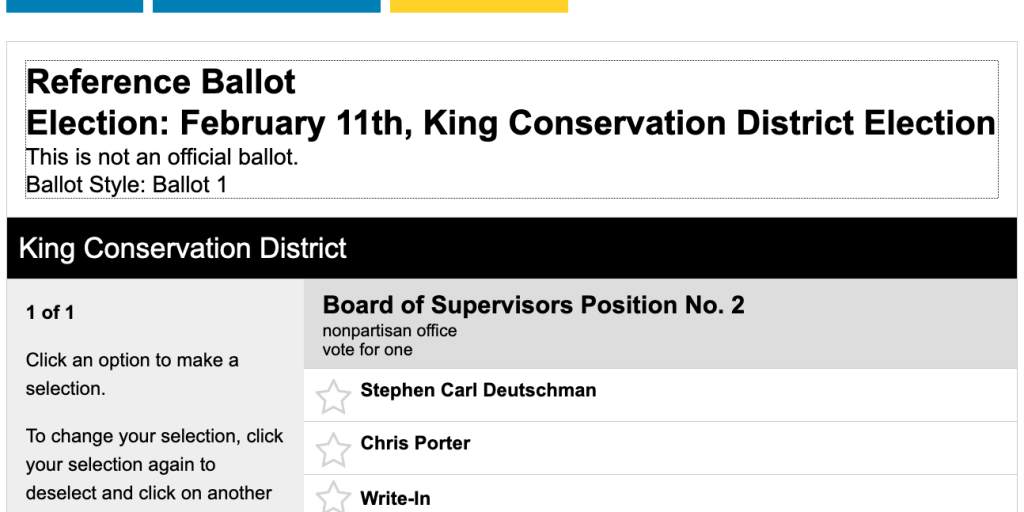 King County, Wash., is administering a historic, first-of-its-kind election in which all eligible voters are being allowed to cast their votes online.

The election is for the King Conservation District (KCD) Board of Supervisors, an obscure contest that typically draws a 1-to-3-percent voter turnout, according to The Seattle Times.

However, between Jan. 22 and Feb. 11, all eligible voters will be allowed to cast their votes online, whether by smartphone, tablet or PC, the Times reports. It is the first election in the U.S. in which every registered voter can vote online.

“This election could be a key step in moving toward electronic access and return for voters across the region,” King County Director of Elections Julie Wise told the Times. “My role here is to remove barriers to voting.”

To make the vote happen, KCD partnered with King County Elections, Democracy Live and Tusk Philanthropies, according to KCD’s website. In addition to online voting, voters are also allowed to cast their votes by mail, in-person or by printing their ballots and dropping them at a county drop box.

Tusk Philanthropies Founder and CEO Bradley Tusk called the move, “the most fundamentally transformative reform you can do in democracy,” according to NPR. However, it has also been met with some skepticism, as cybersecurity concerns abound.

Washington Secretary of State Kim Wyman noted in a statement that her office doesn’t oversee conservation district elections, according to The Monroe Monitor.

“Any time you connect a system online, it becomes vulnerable to attack,” Wyman said in the statement. “As my office looks ahead to the five elections we must conduct this year, I’m seeking to rollback electronic ballot return methods.”

Ray Kelly, principal solutions architect and alliances at Whitehat Security, noted in a statement provided to American City & County that a few issues exist with mobile voting. Personal information and app data could be stolen, while votes could be manipulated on a large scale by accessing servers through vulnerabilities.

“There is no doubt that this endeavor will be a magnet for hackers around the world to try to find flaws in this new mobile voting platform, with motivation to potentially skew elections,” Kelly said in his statement. “Securing all aspects of electronic voting is a must, and special care will need to be given when it comes to mobile apps.”