New York City Mayor Bill de Blasio holds up a copy of 'One NYC 2050' as he speaks the city's response to climate change on April 22, 2019. (Photo by Drew Angerer/Getty Images) 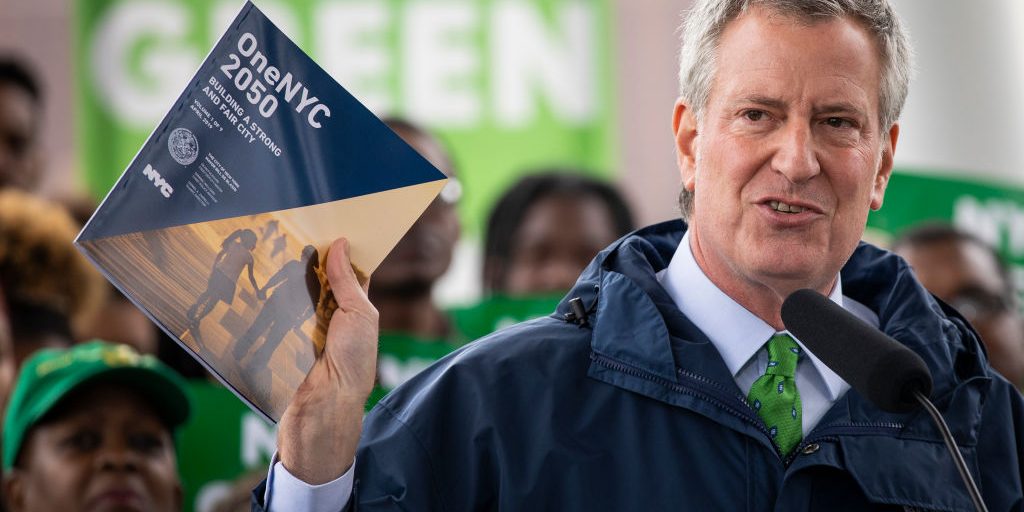 The New York City Council recently passed a policy package that aims to enact the largest carbon reducing measures of any city in the world.

Passed on April 19, the comprehensive Climate Mobilization Act introduces nine measures that seek to curb carbon emissions on a grand scale in America’s largest city, according to city materials.

The heart of the package is a bill that mandates large- and medium-sized residential and commercial buildings to cut emissions by 40 percent by 2030 and 80 percent by 2050, per the news release.

“The Climate Mobilization Act is a down payment on the future of New York City — one that ensures we lead the way in the ever-growing fight against climate change,” said New York Councilman Costa Constantinides, the bill’s sponsor, per the New York Daily News. “Today, we sent that message to the world by enacting the boldest mandate to reduce carbon emissions, tackling one of the biggest drivers of climate change.”

Additional measures include requiring certain structures to either be equipped with solar cells or to build green roofs, easing the building of wind projects and requiring the city to study methods of shutting down its utility-sized power plants and replacing them with renewable energy sources, according to The Hill.

A renewable energy loan program would also be established as part of the act, according to U.S. News & World Report.

Real estate leaders have criticized the legislation, saying that it would place a heavy burden on the industry and tenants, according to The Architect’s Newspaper. According to the Daily News, industry leaders support reducing emissions, but they claim the central emission reduction bill doesn’t take a city-wide approach to climate change.

In a video posted to Twitter, New York Mayor Bill de Blasio said that, “there is no federal plan to address climate change. We have to do it ourselves, in this city and cities all over the country.” The mayor is expected to sign the act, The Hill reports.