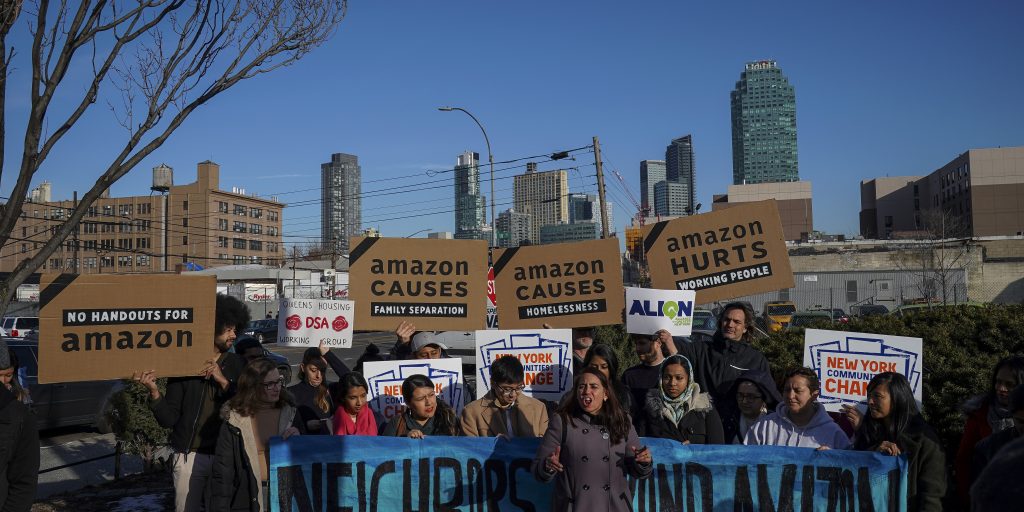 Amazon pulls out of New York amid contentious politics

Amazon has abandoned its plans to build a new hub in the New York neighborhood of Long island City amid turmoil expressed among politicians.

“For Amazon, the commitment to build a new headquarters requires positive, collaborative relationships with state and local elected officials who will be supportive over the long-term,” the company wrote in a blog post announcing plans to abandon the half-headquarters.

New Yorkers however, stood divided on the issue. Critics argued that outsiders would fill the 25,000 jobs that Amazon was expected to bring to New York, the Detroit Free-Press reports. Moreover, New York’s already-crowded transit system would grow even more congested.

U.S. Rep. Alexandria Ocasio-Cortez blasted the $1.525 billion in incentives that New York State had committed to grant Amazon as a result of the company building a headquarters in the city, CNN reports.

New York Mayor Bill de Blasio however, lauded the deal, as did New York Governor Andrew Cuomo. Cuomo called the announcement a “historic transformative moment for the entire New York City region,” while blasting critics of the deal in a Nov. 19 op-ed.

De Blasio said he was thrilled at the announcement and that it was “a giant step on our path to building an economy in New York City that leaves no one behind,” according to a news release.

Amazon cited opposition to its presence from local and state politicians as well as unwillingness  “work with us to build the type of relationships that are required to go forward with the project we and many others envisioned in Long Island City” as reasons for its withdrawal from the city, according to its blog post.

Once Amazon announced its plans to withdraw from New York however, blame was thrown at different parties.

Cuomo blamed the New York State Senate for doing “tremendous damage” and said that they should be held accountable for Amazon balking on coming to the city in an official statement.

“I look forward to working with companies that understand that if you’re willing to engage with New Yorkers and work through challenging issues, New York City is the world’s best place to do business,”  New York City Council Speaker Corey Johnson said in a statement following the announcement.

In a New York Times op-ed, de Blasio accused the company of not speaking with the community about how to shape its project, or to engage with critics.

“Amazon’s path in New York would have been far smoother had it recognized our residents’ fears of economic insecurity and displacement — and spoken to them directly,” de Blasio wrote. “We just witnessed another example of what the concentration of power in the hands of huge corporations leaves in its wake.”

New York City Comptroller Scott Stringer however, accused de Blasio of not gathering input from residents in striking a deal with Amazon. “[Mayor de Blasio] with all due respect, you made this deal in secret with no community input from LIC residents. While Amazon is no angel, they played by your rules. The early takeaway from this: don’t be afraid of transparency and community inclusion,” Stringer tweeted.

“The Amazon deal was a mess. $3 billion in subsidies for a trillion dollar company, pushed through by 2 men who think community engagement is a joke. This is why you bring local residents and stakeholders to the table *before* claiming victory,” Mark-Viverito tweeted.