PARADISE, CA - NOVEMBER 10: Yuba and Butte County sherriff deputies search a destroyed home for a reported victim of the Camp Fire on November 10, 2018 in Paradise, California. Fueled by high winds and low humidity, the rapidly spreading Camp Fire ripped through the town of Paradise and has quickly charred 100,000 acres and has destroyed over 6,700 homes and businesses in a matter of hours. The fire is currently at 20 percent containment. (Photo by Justin Sullivan/Getty Images) 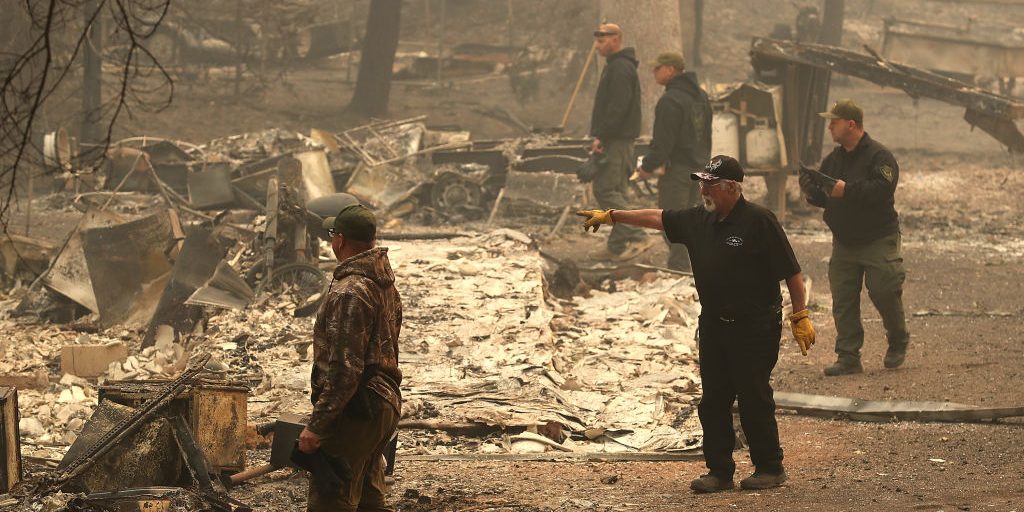 The Camp Fire, which is now California’s most destructive wildfire based on structures destroyed, has all but completely obliterated the town of Paradise, Calif.

It’s estimated that the Camp Fire destroyed about 80 to 90 percent of the homes in Paradise, CNN reports. “There’s really not much left. There are very few homes still standing and we’ve been in multiple different neighborhoods this afternoon,” Paradise Mayor Jody Jones told CNN.

The Camp Fire started on Nov. 8, and in less than one day, the entire town of Paradise was evacuated, according to Time magazine. “We’re grateful that we got people out as quickly as we did yesterday, but we have a lot to do, to rebuild,” Jones told CNN.

“This is my business here and we’re working to head over and see how our house is, I don’t know if that survived,” Councilman Steve Crowder told California TV station ABC 7 as he surveyed the town. “About 80 percent of the houses in town are gone, and our downtown is devastated. This fire took everything. It wasn’t a section, it was town-wide.”

Butte County, Calif., in which Paradise lies, is facing multiple issues of its own in the wake of the Camp Fire’s destruction. The county had a housing vacancy rate of between 1.5 to 2.5 percent, but the fire had destroyed about 15 percent of the county’s housing at four days into the fire’s existence, the Chico Enterprise-Record reports.

Additionally, Butte County has faced a wave of looting in the days since the fire started burning, according to the Enterprise Record. The county received 53 reports of suspected looting within three days.

One of the major worries in the county is that Paradise residents may not return after the fire is put out, according to the Enterprise-Record.

“My biggest fear for my community, because of the horrific loss of businesses and personal residences and apartment complexes, is that a lot of people may have lost their jobs on the ridge,” Butte County Supervisor Doug Teeter told the Enterprise-Record. “They may well choose that I can’t rebuild because I need a job.”