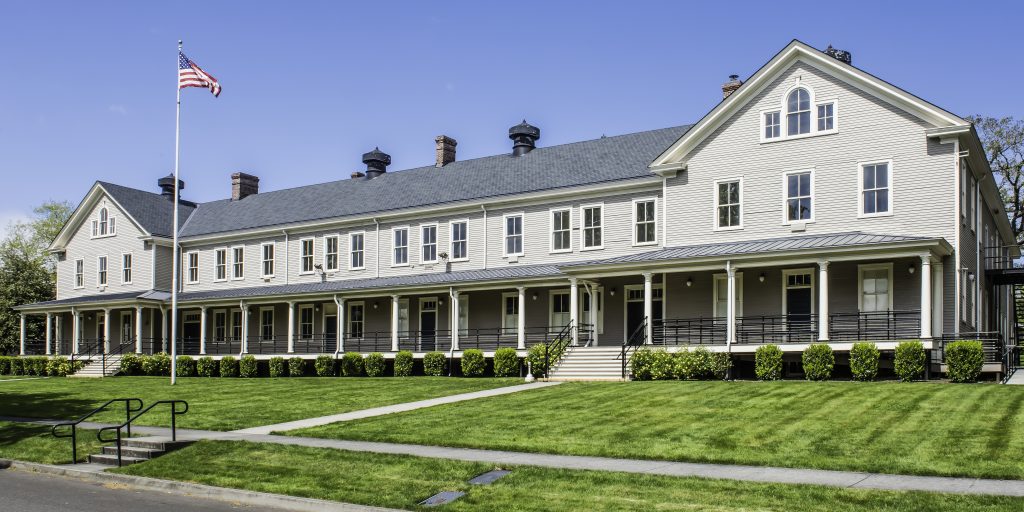 Mini-bonds democratize municipal bonds and are growing in usage, but do these divergent securities yield more benefits than traditional municipal bonds?

Issuing municipal bonds is an effective public funding mechanism, but it isn’t the most public-facing mechanism. Being typically sold in $5,000 increments — according to the Municipal Securities Rulemaking Board — can make an individual’s purchase of municipal bonds prohibitive to those who desire to invest in their communities.

Growing in prevalence however, is a different type of government security that lets city officials make municipal bonds more accessible to their constituents. Mini-bonds, or small denomination municipal bonds, democratize municipal bonds by selling directly to investors in much lower increments like $500 or $1,000.

Mini-bonds aren’t new — certain local governments have issued small denomination bonds sporadically across the country since New Orleans did so in the late 1800s, according to a 2016 Municipal Finance Journal article, “Costs of Raising (Social) Capital Through Mini-Bonds,” by University of Colorado Denver Associate Professors Todd Ely and Christine Martell. However, they reemerged in the early 1990s.

While similar in name to municipal bonds, the characteristics of a mini-bond, its issuance process, its advantages, its challenges and its ultimate tangible and intangible yields diverge from traditional municipal bonds.

The bond between government and constituents

Financially-speaking, mini-bonds stand distinct from municipal bonds, Ely and Martell write. Municipal bonds are current interest bonds that are limited by investor demand, have no maximum purchase amount and typically mature up to 40 years. Mini-bonds however, are typically zero-coupon bonds that are limited by individual investor demand, have purchase caps for individual or household investors and mature for shorter periods.

The sale of debt as a vehicle for funding is the chief purpose of municipal bonds. While functioning as a financial instrument, mini-bonds also give people access to the municipal bond market and make them cognizant of the connection between their investment and local projects, Martell explains in an interview.

People who wouldn’t buy $5,000 municipal bond increments can invest in a portfolio of municipal bonds through mutual funds. But the concept of a mini-bond allows people to invest directly into a project they can see at home, says Michael Belsky, executive director of the Harris School of Public Policy’s Center for Municipal Finance at the University of Chicago.

The result, is that mini-bonds can serve citizen engagement purposes as well as financial ones.

“We used to have war bonds, where people would buy bonds to support the war effort during World War II,” Belsky says. “It’s a similar idea, right? You’re rallying your community around something that benefits them.”

Finance officials in cities that have issued mini-bonds say that mini-bonds function best when they are allocated to fund physical infrastructure like buildings. Cambridge, Mass. issued mini-bonds in February 2017 and February 2018, and Cambridge Assistant City Manager for Fiscal Affairs David Kale says that feedback from Cambridge residents showed that they wanted to purchase mini-bonds that would fund city projects that they could see and feel.

“You want people to invest into something tangible that will make them proud,” says Natasha Ramras, finance director for Vancouver, Wash., which sold mini-bonds between May 26, 2015 and June 5, 2015 to help fund the renovation of buildings within the Vancouver National Historic Reserve.

The sale of mini-bonds is often limited to state or local residents. Both of Cambridge’s mini-bond issuances were limited to city residents, according to the city’s website. Comparatively, Madison, Wis., sold mini-bonds labeled as “community bonds” in October 2018 on a first-come, first-serve basis with preference given to residents of Madison, then Dane County (Wis.), then Wisconsin and lastly to the U.S. as a whole, according to Madison Finance Director David Schmiedicke.

The actual order of mini-bonds differs from municipal bonds as well. “With our typical debt sales, we’ll just have a competitive sale. It’ll be a certain time on a certain date and that’s it. Whoever has the lowest bid gets the deal,” Schmiedicke says. “In this case, with the community bonds, it’ll be roughly a one-week-long order period to give folks time to purchase it, and hopefully we’ll have them all sold during that order period.”

Given municipal bonds’ obscurity to the average city resident, issuing mini-bonds requires thorough marketing as well — an endeavor that wouldn’t make sense for the bonds’ larger siblings. Comparing a mini-bond issuance to a municipal bond issuance, Schmiedicke notes that the former “involves a little more work in the sense that we have to put together a marketing plan and marketing materials.”

The execution of a marketing campaign is one of several key differences between the way mini-bonds are issued, versus how municipal bonds are issued. 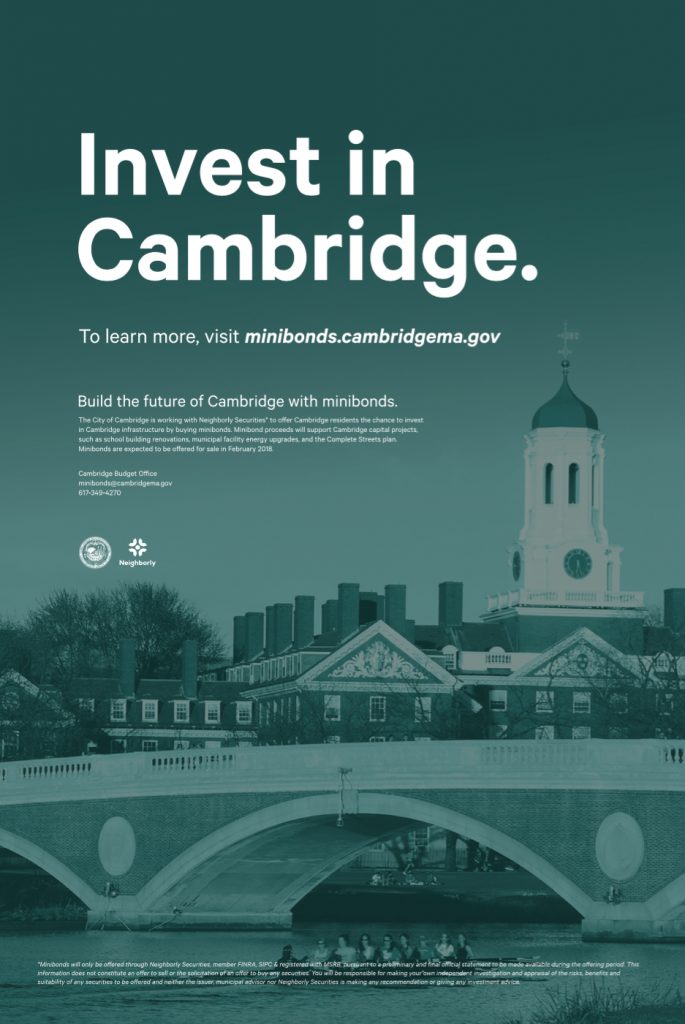 An advertisement that Cambridge, Mass., released to promote its mini-bond issuance to residents.

Essentially, there are two major ways to go about issuing mini-bonds. The first — which Vancouver did in 2015 — is for the city to assume administrative responsibilities itself.

While the city involved multiple intermediaries in its issuance process like an underwriter, a bond counsel and a fiscal agent, Vancouver opted to receive orders internally, according to Vancouver Treasurer Carrie Lewellen. Taking orders in-person and by mail that could range from $500 to $10,000 per household proved to be a challenge — the city ultimately received around 280 orders totaling nearly $1.3 million during a two-week order period. Vancouver publicized the mini-bonds through press releases and social media posts.

Cambridge and Madison however, pursued the issuance of mini-bonds through a second method — by working with a company called Neighborly.

Originally founded in 2012, Neighborly established itself as a broker and dealer of mini-bonds in 2016, working as the lead banker for mini-bond deals, according to Neighborly Director of Business Development Pitichoke Chulapamornsri.

Neighborly digitizes mini-bond issuance — cities issue their mini-bonds through Neighborly’s online platform, where Neighborly sets bond denominations and where the order taking process takes place, Chulapamornsri says. While Neighborly does mini-bond underwriting, cities need to go through standard bond procedures like enlisting a bond counsel and working with a municipal advisor. The company works with each community to negotiate an underwriting fee that is dependent on the specific project.

“Our mission is to make it possible for anyone to invest in bonds,” Chulapamornsri says.

Neighborly also supports cities in implementing a marketing campaign to target residents, he adds. Cambridge was the first city that Neighborly worked with to issue mini-bonds, and Kale says that key elements from that issuance in 2017 concerned educating residents on mini-bonds and on Neighborly, as well as conducting the outreach necessary for residents to become aware of the city’s mini-bond issuance.

Leading up to its first mini-bond issuance, Cambridge created a “robust” webpage full of information on the city’s mini-bonds, held community meetings to answer questions and conducted an extensive campaign of advertisements through postcards and kiosks, according to Kale.

“In year one, I think it was clearly a novelty of buying Cambridge bonds directly,” he says. “I think clearly; we were hoping that people in year two would have the same kind of affinity for the purchase of mini-bonds. And I think that not only did we see that occur in year two, we also saw that we had a whole bunch of new investors coming to the last year’s sale.”

In 2017, Cambridge sold out of its $2 million mini-bond issuance through 244 orders, and The Bond Buyer named it the Non-Traditional Deal of the Year, according to Kale and the city’s website. The city plans to use that money to renovate school buildings, upgrade municipal facilities’ energy efficiency, update city parks and to implement its Complete Streets plan, a Neighborly case study on the issuance shows.

A look at the balance sheet

Mini-bonds can clearly sell given enough outreach. Examined more quantitatively however, disadvantages appear for the security compared to traditional municipal bonds. For example, it’s unrealistic to assume that a mini-bond would sell nearly as much as a municipal bond would, Belsky says.

“You’re not going to be able to completely sell out to individuals that live in your community a $10- to $20- or even a $100 million issue,” Belsky says. “You might be able to sell out to people in the community something that ranges from $1 million to $2 million. On the larger issues, you’re just going to see a small portion of it sold.”

This hearkens back to Vancouver, which carved $1.5 million out of a $4.7 million total municipal bond to be sold as mini-bonds, according to data provided by Lewellen. The rest was sold as limited tax general obligation bonds.

Ultimately, Ely and Martell write, the decision to issue a mini-bond, “is a political decision to accept higher costs of borrowing for perceived benefits that are much harder to value.”

Further on in the article, both professors write that, “a primary lesson learned is that elected officials should be provided an estimate of the additional costs of mini-bond financing to accurately weigh their costs and benefits.”

However, there are other cities that seem to have chosen to pursue those perceived benefits. In 2017, Neighborly also worked with Burlington, Vt. and Lawrence, Kan. to issue mini-bonds, and the company worked with Madison and Somerville, Mass. this year to issue mini-bonds, Chulapamornsri says. Additionally, Cambridge is set to conduct another mini-bond issuance in 2019, tentatively set at $2.5 million, according to Kale.