Hurricane Michael over Florida on Oct. 10. Image via NASA. 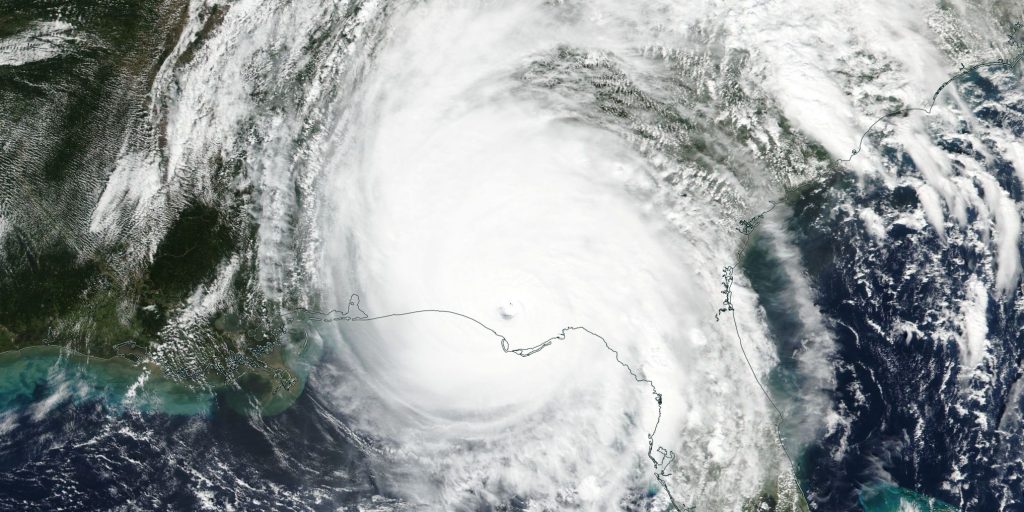 President Donald Trump and First Lady Melania Trump today visited the Florida and Georgia cost to meet with officials in communities ravaged by Hurricane Michael. Damage is extensive, at least 18 are dead, and least one town has practically been wiped off the map.

Michael hit the Florida Panhandle as a Category 4 hurricane, and was the strongest storm to make landfall in the continental U.S. since Andrew in 1992, according to the National Hurricane Center.

Mexico Beach, Fla., officials report 30 to 35 people are still missing since Hurricane Michael made landfall in the once-beautiful beach town. The city itself is in rubble, CNN reports, and few structures are left standing.

Beyond Mexico Beach, more than 230,000 people in the region are still without power. Drivers are lining up for hours to get fuel, and residents of the hardest hit areas are relying on airdropped food and water, according to CNN.

The devastation highlights a weak point in Florida’s statewide building code, according to an opinion piece published in the Miami Herald by members of the paper’s editorial staff. Although Florida’s codes are among the strongest anywhere when it comes to preparing for high winds, across the Panhandle, code requires for wind resistance vary widely by jurisdiction. In the panhandle, the code requirements are significantly less stringent than in more rigorous South Florida.

Under the statewide code, most new structures in Miami-Dade County, including homes and office buildings, must be designed to withstand winds around 175 miles an hour, John Pistorino, a veteran Miami structural engineer who helped write the building rules, told the paper. However, in the areas hardest hit by Michael — including Mexico Beach, Apalachicola and Panama City — the design standard drops to as low as 120 miles an hour before rising gradually to 150 mph around Pensacola at the state’s far western edge, the Miami Herald reports.

Michael’s abnormal power and unusual behavior has experts rethinking the wisdom of that notion. “The assumption was, you don’t really have powerful hurricanes hitting the Panhandle,” said Craig Fugate, a former emergency management chief for the state and former head of the Federal Emergency Management Agency, told the Herald. “Michael just threw all that in their face.”

“After every event, you always go back and look what you can do better. After Andrew, the codes changed dramatically in our state,” Scott said. “Every time something like this happens, you have to say to yourself, ‘Is there something we can do better?’”

Almost a week into rebuilding, some communities are having difficulty seeing the path forward. In Bay County, Fla., every school has been damaged or destroyed, and classes have been postponed indefinitely, CNN reports.

“I would say every single school in Bay County has some type of damage, some more extensive than others,” Steve Moss, vice chairman of Bay District School Board, told the news source. “Some it’ll probably take weeks or months to get online. Some it will take years. The only thing left of some of our schools … is the foundation.”

Ironically, Michael made landfall shortly after an international group of scientists released a long-anticipated report detailing the damage unmitigated climate change will cause in our communities.

“We are exceptionally ill-prepared for the climate threats that are unfolding today, let alone those of the next decades,” Kim Cobb, a chairperson at Georgia Power and director of the global change program at the Georgia Institute of Technology wrote in the Washington Post. “Studies now show that there are plenty of reasons to think that hurricanes will get stronger, and wetter, under continued climate change, as the ocean and the overlying atmosphere warm.”

To learn more about what your city can do to prevent the impacts of global climate change, download the National League of Cities’ toolkit here.