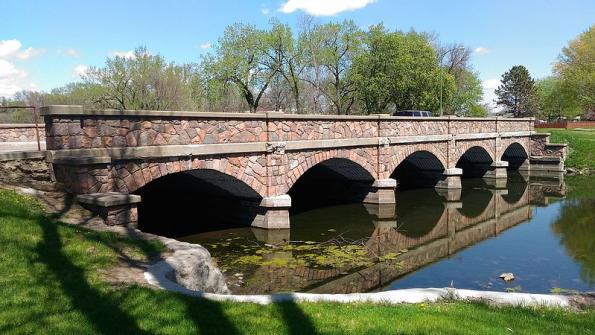 Counties are struggling to repair deteriorating bridges on their own, and obtaining state funds requires overcoming major obstacles.

Counties are struggling to repair deteriorating bridges on their own, and obtaining state funds requires overcoming major obstacles.

However, grants are distributed based on a point system judged based on the bridges’ condition, how much the county is charging in its wheel tax, and how much traveling occurs across the bridges, SD News Watch reports. Counties must have a wheel tax and a five year highway and bridge improvement plan to qualify for the grants.

Moreover, counties’ scores increase based on how much they’re willing to spend on a project, without considering how much money a county has on hand or how many of its bridges need work, according to SD News Watch. This can make obtaining grant funds tougher for smaller counties.

“It’s kind of a learning experience for everyone. The biggest way to gain more points would be to go plans-ready or up your percentage,” Grant County, S.D. Highway Superintendent Kerwin Schultz told SD News Watch. “I think we intend to kind of go that direction in the future.”

Meanwhile, a Wisconsin bridge funding program called “Replace-In-Kind” charges local governments that apply for state bridge funding aid with designing bridge replacements to minimum state engineering standards based on existing traffic conditions, according to Urban Milwaukee. If the application is successful, the state will fund for 80 percent of the bridge replacement.

“The department focus is on right-scoping projects,”Wisconsin Department of Transportation Secretary Dave Ross said, per Urban Milwaukee. “This means we’re going to build exactly what is needed to achieve safety and to improve the transportation infrastructure.”

If a local government wants to go beyond the minimum standards, the Wisconsin government forces that government to do so using their own money, Urban Milwaukee reports. Not being allowed to account for future traffic estimates in order to qualify for funding can be dangerous, Price County, Wis. Highway Commissioner Don Grande told Urban Milwaukee. The county aims to replace a bridge whose deficiencies had kept heavy trucks off of it.

“Once this bridge is replaced, this bridge will serve PCA, the paper company over in Tomahawk, as a direct route off of Highway 8,” Grande told Urban Milwaukee. “The traffic volumes will increase once the bridge is replaced and the weight limits come off. We’re concerned that we’re going to under-size or under-design that bridge just to be able for the funding.”

Instead of helping counties repair certain bridges, the Mississippi government has opted to close them. In April, Mississippi Governor Phil Bryant declared a state of emergency and ordered 83 highly dilapidated county bridges to be closed after U.S. Transportation Secretary Elaine Chao notified him that transportation officials had ordered that the bridges be closed months prior, the Clarion Ledger reports.

The move followed years of delayed maintenance and the absence of a statewide infrastructure package, according to Mississippi Today. While Bryant called for a mid-August special legislative session to find special funding for deteriorated county bridges and roads, Mississippi counties are scrambling to find funding before their budget finalizations are due on Oct. 1. As of Aug. 10, no special session had been called.

“Our goal is to not raise property taxes, of course, but I don’t think that’s going to be something we can get away from this year,” Jasper County, Miss. Supervisor Doug Rogers told Mississippi Today. “I wouldn’t rule out the fact of doing a bond issue to repair these bridges, either, but we’re not sure yet what we’re going to do. I do know that we don’t have the funding right now to repair all the bridge problems we’ve got.”

“I don’t think we could add enough property taxes to reopen what we’ve got,” Amite County, Miss. Supervisor Jackie Whittington told Mississippi Today. “We’re hoping there will be some (state money) allotted to rebuild some of these bridges, whether it’s a fuel tax or whatever. But at this point, I really don’t know what the solution is.”

Counties build and maintain more than 38 percent of American bridges, according to the National Association of Counties (NACo).