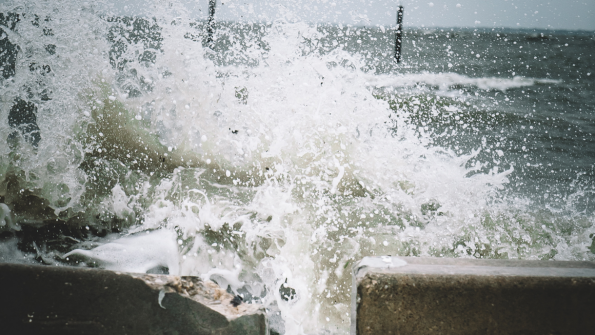 When the levee breaks

We’re reaching the point of no return with global climate change, and without immediate intervention, irrevocable damage may be done.

Atmospheric carbon dioxide (CO2) levels are higher than they’ve been in almost a million years.

This is according to the Scripps Institution of Oceanography, which has been recording levels of CO2 in the atmosphere for over 60 years. The first measurements, taken at the Mauna Loa Observatory in Hawaii, was 315 ppm. This past April, the institution recorded 410.31 ppm. This represents a 30 percent increase in atmospheric carbon dioxide since the Keeling Curve – a well-respected and scientifically proven data set – began in 1958.

“Prior to the onset of the Industrial Revolution, CO2 levels had fluctuated over the millennia but had never exceeded 300 ppm at any point in the last 800,000 years,” according to Institution materials. “The April monthly average exceeds 410 parts per million for the first time in recorded history.”

According to the National Aeronautics and Space Administration (NASA) “97 percent or more of actively publishing climate scientists agree: climate-warming trends over the past century are extremely likely due to human activities. In addition, most of the leading scientific organizations worldwide have issued public statements endorsing this position.”

The planet’s average surface temperature has risen about 2 degrees Fahrenheit since the late 19th century, according to NASA materials. This change is driven largely by an increase in human-made emissions. Most of the warming has occurred in the past 35 years, with 16 of the 17 hottest years on record occurring since 2001.

This warming has consequences. NASA says the oceans have warmed by 0.3 degrees since 1969, ice sheets have shrunk noticeably, and glaciers and snow cover have retreated dramatically across the globe. Sea levels are increasing, and weather events like hurricanes Sandy and Harvey are becoming more frequent and more severe. Despite political posturing on the issue, the science is clear – our atmosphere is rapidly becoming unstable, the planet is warming as a result, and it is imperative that mankind’s leadership respond to this existential threat.

Don Hall, a co-executive director of Transition U.S., a non-profit organization working to build community resilience in the face of environmental and economic crisis, says our nation as a whole is poorly prepared to deal with the impacts of climate change.

“This is a much bigger issue than most people realize,” he says. “It’s unfolding a lot faster than most people recognize. If we really listen to the scientists and take the broad consensus of the scientific community seriously, we know that we have to limit global warming to around 1.5 degrees Celsius to avoid runaway climate change and destructive positive feedback loops. We’re already at 1 degree or warmer.”

Hall says dramatic action needs to be made now to respond in order to prevent a global crisis. Unfortunately, he doesn’t see federal leadership rising to the challenge. Now, Hall says, it’s going to be up to cities and counties to lead the charge.

If dramatic action is not taken, Hall worries humanity will reap extreme consequences. “We’ll lose our coastal cities to sea level rise, increased temperatures will lead to deadly heat waves, diseases that were understood to be tropical will spread to places they’ve never been, storms will be stronger and more deadly – overall climate chaos,” he says. “When you throw a system out of its equilibrium, you tend to have wild swings.”

Despite these risks, leadership has been slow to respond. Hall thinks there are myriad reasons for this inaction, but admitting there is a problem and attempting to respond to it goes against the entire trajectory of human civilization.

“Since the beginning of the industrial revolution, society has been based on growth, expansion, using our natural resources to the fullest extent,” he says. “We have an economy that requires continual growth just to maintain itself, and we have a political system that is geared toward maintaining that growth… we’ve locked ourselves in unstainable development patterns.”

While we all enjoy the benefits of this particular type of society, there are consequences of unmitigated expansion. “Climate change is a wakeup call that is saying we can’t continue to chew up and spit out the world as quickly as we’ve been doing.” Hall says, “We need to create sustainable systems. We need to create a steady state – one that is more localized. The pendulum has swung much too far.”

One of the main problems, Hall believes, is that our power structures are much too short-sighted. “Governments, businesses and individuals often times don’t want to think about the future,” he says. “Things are going okay right now, so we heavily discount the future in the appreciation of the present. That’s very dangerous.”

Another issue, according to Hall, is that climate change is an unprecedented problem. Never before in the history of our species have we had to deal with a threat such as this. We don’t have lessons from history to learn from, and there’s no model of response to work with. This problem is unique and will require new ways of thinking to solve.

Complicating the problem, Hall says, is the concerted effort to diminish the problem and confuse the issue. “While the arguments for climate change denial are unconvincing, all you need to do is sew a small seed of doubt,” he says. “Maybe this isn’t that big of a problem, maybe I can just keep doing what I’m doing. That’s often enough to keep people from taking action.”

However, there are many communities across the country that are taking action. Imogen Ainsworth, the sustainability coordinator for Durango, Colo., says her community is committed to creating a more sustainable and resilient way of life through a multi-pronged effort including water conservation initiatives, energy-use reduction and a focus on facilitating the use of renewable energy sources.

She says being a leader in this regard is important to the city. Leadership has incorporated up-to-date climate change research into planning efforts, and their actions are informed by scientific consensus in this regard.

“Sustainability has been a top priority for our city council for several years,” Ainsworth says. “Recognizing and trying to mitigate the impact we have on the environment is important.”

Durango is Silver Certified though SolSmart, an effort to provide no-cost technical assistance to help communities in order to make it faster, easier and more affordable to utilize solar energy. Funded by the U.S. Department of Energy Solar Energy Technologies Office and led by The Solar Foundation and the International City/County Management Association (ICMA), SolSmart launched two years ago and has since certified communities in 35 states, representing over 59 million Americans, according to program materials.

Through the program, Durango conducted a review of their solar energy processes and as a direct result developed a new simplified permitting application. Because of this, the city is deliberately shifting away from non-renewable energy and prioritizing sustainability and reliance.

Ainsworth says it’s the responsibility of communities to understand their role in the global climate system and take steps lessen their impacts. “Cities need to recognize the impact their operations have on the environment,” Ainsworth says. “Both in the [regional] area and also as a member of a global community.”

Local leadership, she says, plays a major role in gaining this global perspective. “The goals and priorities leaders set shape budget processes and the programs city staff focus on,” she says “Because our [leadership] has for a number of years focused on climate change and sustainability as one of their top five priorities, it’s really helped guide the direction of the entire city towards these goals.”

There are many things local governments can do to accomplish this work, Hall says. “I would say the first step is to sit down with environmental leaders in your community and hear from them what they think the priorities are,” he says. “You often have people who have been working on this for decades, and you have a lot of great ideas and networks of support who are ready to get to work, but they don’t have the recourses to make these things happen.”

However, a major stumbling block to these efforts is the idea that a single individual in a single community is too small to impact such a massive problem. This attitude, Ainsworth says, is far from the truth.

She encourages local leaders to not think about their impact in the short term, but rather in the context of a lasting legacy. No one individual is going to solve the problem of climate change, but through the incremental efforts of leaders to create more sustainable futures for their communities and the world at large.

“I think this is something that a lot of people struggle with,” she says. “But we have to make sure we’re building communities that are sustainable in the long term. It’s not just the impact of your actions now, but through climate-conscious planning or having over-arching sustainability goals, you can build a more resilient community – not only one that is mitigating climate change but also one that’s prepared for its impacts.”

It’s important for local leadership to understand their role in mitigating climate change, she says. In the current political climate, any significant action to mitigate climate change will fall on city and county shoulders. The current administration has been dismissive of global efforts to mitigate climate change, demonstrated by President Trump’s withdrawal from the Paris Agreement last year, and additionally, Scott Pruitt – Trump’s appointee to head the Environmental protection Agency – has gone on record saying he believes man-made CO2 emissions are not a primary contributor to global climate change, a view diametrically opposed to scientific consensus.

Yet, by prioritizing sustainability efforts and working to mitigate environmental impacts, local leaders can make a significant change. “Local governments are on the front lines of our national clean energy transformation, taking bold action to cut costs and expand solar energy use,” Andrea Luecke, president and executive director of The Solar Foundation says. “SolSmart has helped 200 local governments and counting reduce administrative hurdles to solar, making them more resilient, more competitive, and well-positioned to attract new jobs and economic growth.”

The problem is daunting, but Hall says we can no longer continue to turn a blind eye to it. In his opinion, something must be done, and this problem commands the focus of worldwide leadership – from the smallest neighborhoods to the largest countries.

“We can’t fix this problem after work or on the weekends,” Hall says. “We can’t do this as an afterthought. This has to be a lifestyle shift. We have to prioritize this as the great work of our time.”