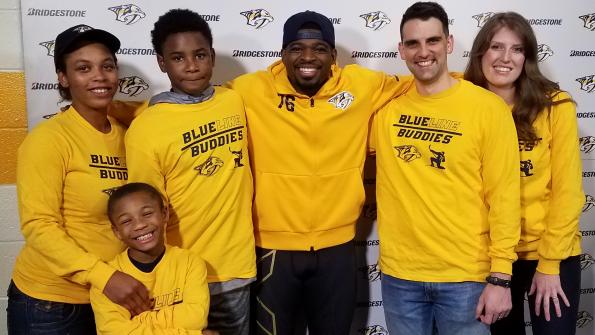 Shifting attitudes in policing tactics are connecting officers with the communities they serve.

Across the country, attitudes about policing methods are changing. High-profile cases like Eric Garner, Michael Brown and Philando Castile have eroded an already shaky public trust in law enforcement – a trust many departments are trying to regain. Through community policing, law enforcement officers and the departments they represent are trying to become guardians of their communities, rather than occupying forces.

Sgt. Chris Cognac of the Hawthorne, Calif., Police Department conceptualized Coffee with a Cop, an international community policing program that allows residents to sit down and have a barrier-free conversation with a uniformed officer. An expert on the concept of community policing, Cognac explains that the “us-against-them” mentality is outdated and counterproductive in modern police departments. “Community policing means working in partnership with your community to address crime on a multi-level plane,” He explains. “It’s not strictly enforcing or arresting your way out of a problem, it’s building bridges – building trust – and finding out the root causes of issues to solve them holistically.”

However, when “community policing” comes up, large cities like Baltimore, New York and Philadelphia are usually the first to come to mind, but the concept is important in smaller localities too. Noblesville, Ind., a community of approximately 60,000 located directly north of Indianapolis, is embracing community policing methodology, and in doing so is seeing impressive results.

“For years our uniformed officers have operated under a response model of patrol,” Noblesville Police Captain Jon Williams says. “They were assigned to a specific district and absent to any direct patrol assignments from their supervisor they would roam their area.”

While this model of policing is effective for keeping neighborhoods safe, officers have little interaction with their communities or even the officers who are also policing the same communities. Once an officer’s shift is up, they were likely assigned a new district to patrol, Williams says. Understandably, relationships were difficult to foster under this model.

“We decided we needed to make some changes,” Williams says. “Some of these changes had to do with communication, some of them had to do with bridging a gap between officers and the citizenry.”

One of the first orders of business was to freeze the patrol districts. “In other words, instead of an officer changing shifts every single time they came on duty, for at least a year’s time, wherever they were assigned, that was their district.”

The intent, Williams explains, was to have officers foster a sense of familiarity with their district and the people who live there. “We want officers out of their cars, walking around, passing out business cards, having dinners, finding out what’s going on,” he says.

Williams says that the Noblesville community has always been supportive of their law enforcement, but the shift towards a more community-oriented policing model has further solidified that support. “I think what it’s ultimately doing is to open lines of communication that have been obscured,” he says.

Communication is critical in efforts to connect law enforcement officers with the communities they serve, and in Nashville, Tenn., the police department is trying to foster these dialogues in a different way – at dinner and a game.

Before the 2017/18 National Hockey League season began, Don Aaron, Public Affairs Manager received a call from the Nashville Predators. A defenseman on the team, P.K. Subban, had an idea for an innovative program to bring the police and the community closer together. “Subban wanted to bridge a gap between police officers and disadvantaged teenagers,” Aaron says.

The program involves Subban purchasing four tickets – two for a police officer and the guest of their choice and two for an at-risk youth and their parent or guardian.

The program is unique Aaron explains, in that it is ongoing. “You hear about special programs like this for one game,” Aaron says, “but this was for all 41 home games in 2017/18.” The longevity of the program, he says, is what has made it such a success.

Once the partnership was established, Aaron says the program immediately became popular throughout the ranks, from the top brass down to the patrolmen.

“The response from the police officers who have participated has been resoundingly positive,” Aaron says. “For several hours, the officer and his guest have the opportunity to bond with a child in a unique way. It’s the only program that I’m aware of that is working in this fashion.”

There is a two-fold benefit to the program, Aaron says, both for the child and the officer.

“The youth gets to see an officer outside the uniform, outside of the patrol car – they get to see another side of the officer,” Aaron says. “The officer gets to bond with a youth in a unique way… this specific officer and this specific teenager might never have had the opportunity to cross paths in a positive way if not for this program.”

Ultimately, the program is about breaking down erroneous preconceptions. Aaron says the youths involved in Blueline Buddies might have an inaccurate idea about who police officers are and what they do. At the same time, the officers themselves might hold some biases that can be absolved by spending time with a young person. At the end of the day, Aaron says, the program helps both parties humanize one another.

The program, although in its infancy, is already having major impacts. Aaron says that one sergeant connected so deeply with his “buddy” that they agreed to meet up frequently to keep their relationship going. Another officer was able to involve his youth and his siblings in a week-long summer camp sponsored by the police department.

“I think the meaningful time these folks are spending with each other is having a meaningful impact,” Aaron says.

Soon the program won’t be unique to Nashville, Aaron says. Other cities are using this model and adapting it to their communities. “Just last week I got a call from Providence Rhode Island – they heard about it and wanted to know the mechanics of how it works. They’re thinking about replicating it there.”

Ultimately, Cognac says that in order to start a community policing effort, the first step is to encourage officers to become active participants in the neighborhoods they police. “Get rid of requirements, get rid of the idea that you have to make x amount of arrests and write x amount of tickets,” he says. “Tell them to go out and meet the people they serve. Find out their names, find out what they do, find out who their kids are… build trust with them, and then work on the issues.”

Laughingly, he adds, “Go play football in the street with them.”